Hi guys! We have Kayleigh Sky popping in today with her release Jesus Kid and it’s stunning new cover, we have a brilliant giveaway, so check out the post and enter the giveaway! ❤️ ~Pixie~ 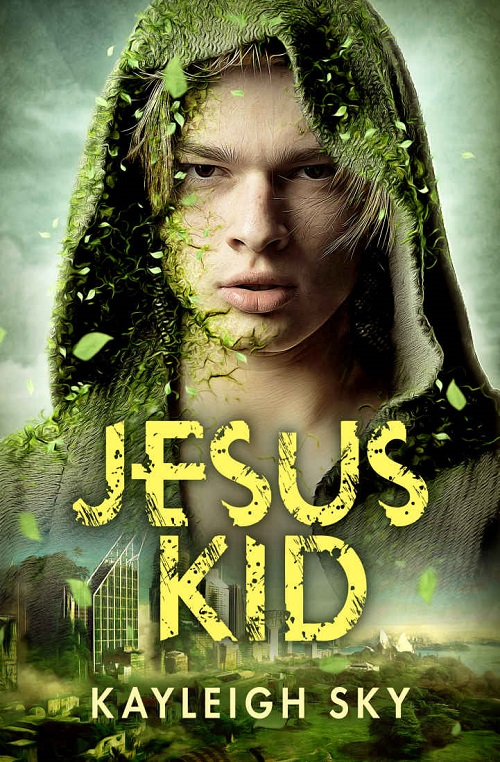 Ori Scott is a young junkie running from his mother’s prophecy that he’d one day save the world from the killer plants. Her preaching made him a laughingstock and now he hides in his drugs. But he can’t hide the change in his veins. They are turning green, and the prophecy is dragging him into a dark struggle between invisible forces. Set up on bogus drug charges, Ori is taken to a secret facility where he becomes a test subject in experiments to discover an antidote to the alien plant’s sting.

Jack Doll is a cop with a vendetta against the plants that killed his best friend. All he has in the world now is his old friend’s lover, Rive. Together they form an unbreakable bond—or so he thought. Jack has never liked Rive’s friend, Ori, but he believes in Ori’s innocence and doesn’t understand Rive’s strange indifference to Ori’s conviction. Struggling with his suspicions, Jack can’t help digging into a mystery that draws him closer to Ori than ever before—and closer to somebody who has secrets to hide.

Alone and scared, Ori is grateful for Jack Doll’s friendship, and his longtime crush soon blossoms into love. But Ori has no plans to accept his fate. He wants to escape, and he doesn’t care if he takes the cure with him. So… About me. I’ve never run a marathon or scaled Mt. Everest. I’ve never scuba dived or sky dived. I’ve surfed though. That was fun. I have six tattoos, and I really love ink. I also love all plants. Zinnias are one of my favorite flowers. If you’ve never see a zinnia, look it up. Very pretty. It’s an old-timey plant but super easy to grow. Anyway, the big thing I do is write m/m erotic romance. But as much as I love romance and sex, I really love going deep into the dark with my characters. What are their wounds? How can I peel them raw and drag them into the light? This leads to some fairly dark stories sometimes, but even the dark ones come with humor. I think the contradictions in people are ripe for hilarious scene setups. I need humor and light in my life—otherwise, I go into some pretty dark places myself. I live with only one cat now—I once had thirteen. That was crazy. I take up most of the things I research for my characters—photography, tarot, and jewelry making for example. I even bought a recorder once because Ori from Jesus Kid played one. I love that part of my job. I also love to walk and lift weights. I’m not a big fan of yoga—just throwing that out there. So far, all of my characters embody something of me, and all of my characters have given me something of them. But no matter what the struggle is from book to book, love always wins out. I’m strong on plot, strong on character, stronger on love. You can count on happily ever after from me every time. I write my stories to open hearts and uplift spirits. Love matters. It counts. And it’s for everyone. Win an Ebook of Jesus Kid!