Hi peeps! We have Liv Rancourt popping in today with her new release Lost & Found, we have a great excerpt and a fantastic $25 Amazon or B&N GC giveaway, so check out the post and enter the giveaway! ❤️ ~Pixie~ 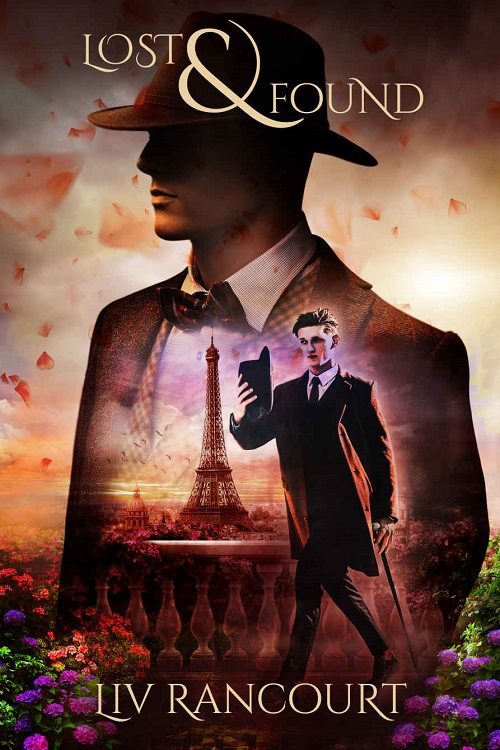 A dancer who cannot dance and a doctor who cannot heal find in each other the strength to love.

History books will call it The Great War, but for Benjamin Holm, that is a misnomer. The war is a disaster, a calamity, and it leaves Benjamin profoundly wounded, his mind and memory shattered. A year after Armistice, still struggling to regain his mental faculties, he returns to Paris in search of his closest friend, Elias.

Benjamin meets Louis Donadieu, a striking and mysterious dance master. Though Louis is a difficult man to know, he offers to help Benjamin. Together they search the cabarets, salons, and art exhibits in the newly revitalized city on the brink of les années folles (the Crazy Years). Almost despite himself, Benjamin breaches Louis’s defenses, and the two men discover an unexpected passion.

As his memory slowly returns, Benjamin will need every ounce of courage he possesses to recover Elias’s story. He and Louis will need even more than that to lay claim to the love – and the future – they deserve. The table on the other side of me was empty, at least until I’d poured myself a second glass of wine. Then, crossing the room in a familiar halting rhythm, my neighbor, the man from the café on the Place du Tertre, took a seat.

I raised my glass in a toast of alcohol-fueled enthusiasm. “It’s nice to see you.”

He blinked as if surprised by my words. “I’m not sure I know you.”

His gaze suggested otherwise. “A while ago, you were at L’Oiseau Bleu.” I swirled the wine in my cup. “Are you following me?”

“I had a taste for fish.” Hooking his cane over the edge of his table, he shrugged again. “And I have better things to do than observe the habits of a drunk American.”

We were interrupted by the arrival of my dinner. There might have been humor in his tone, but still, the sting of his words quashed the impulse to invite him to join me.

Turning to the waiter, slick black hair gleaming, he placed his own order. When the waiter brought his wine, I took the opportunity to raise my glass a second time. “Cheers.” I deliberately did not smile. “Comment allez-vous?” How are you, using the formal “vous,” not the more intimate “tu.”

Tu. In all my time in France, I’d never regularly used the personal form of address. To be honest, if English had an equivalent construction, I could have said the same about my friends and family at home.

His tone, and the slight tremor of his fingers on his glass of wine, hinted otherwise. He turned as if to shield himself from my appraisal. I couldn’t help myself. It was my nature to observe. Assess. Diagnose. “I’m Benjamin Holm.” The distance between us was too great to bridge with a handshake.

He raised his glass. “Louis Donadieu.”

I forced my fork through the crisp crust of fish. Juices ran free, and my mouth watered. I ate, hunger keeping my attention fixed on the food on my plate. Though it had been almost two years since I’d last sat at an army canteen, I still attacked each meal as if someone might steal it away.

At my last bite, I glanced at Louis. He watched me, a pool of stillness amidst the confusion around us. “Did you even taste it?”

“Yes.” Swirling my fork through the drippings on my plate, I fought the urge to smile, unsure of the rules for the game he played.

He sniffed. “Bien.” Shifting in his seat, he poured himself more wine. As long as he wasn’t looking, I continued my assessment. He held his right leg extended, as if he was unable to bend it at the knee, but was otherwise quite vigorous, virile even.

I finished my peas and potatoes, bemused by my strange dinner companion. After a week in Paris, I’d had no luck with my main goal, and this conversation, though tentative, intrigued me.

“Were you injured?” I gestured at his feet with my wine.

“In the war. Your leg.” His narrowed gaze suggested I’d transgressed. So, no questions about his health. “Pardon. I did not mean to—”

“No, I was unable to participate in the grand conflict.”

He turned his attention away, leaving me confused. This was less a game than a jousting contest. Rather than bring another helping of rudeness on my head, I swallowed the rest of my wine and prepared to leave.

I paused in the act of reaching for my wallet. “I’m finished. I need to be going.” Though I had no real destination beyond the poor comfort of my solitary rooms. Instead of my wallet, I fished out the photograph. “Here.” I stood, leaning over his table and offering him the picture of Elias. “I’m looking for my friend Elias. Have you seen him?”

“Maybe he doesn’t want to be found.” He tapped the white edge of the photograph, and I snatched it away.

His acid tone burned through my good humor. Who is this man to follow and then abuse me? “Have a good evening.”

“Good evening, though if you give up so easily, you must not really want to find him.”

Surprise kept me planted by his table. “Do you know where he is?”

He tipped his glass in my direction, the corner of his lips curling in what could not truly be called a smile. Though it wasn’t a scowl either. “No, but if I do see him, I will send him to the heavy-footed American man who lives on the floor above me.”

Tired of being the target of his sport, I straightened, falling into the habitual pose of a military officer. “Again, good evening.” Annoyed beyond what the situation called for, I departed. Liv Rancourt writes romance of all kinds. Because love is love, even with fangs.

Liv is a huge fan of paranormal romance and urban fantasy and loves history just as much, so her stories often feature vampires or magic or they’re set in the past…or all of the above. When Liv isn’t writing she takes care of tiny premature babies or teenagers, depending on whether she’s at work or at home. Her husband is a soul of patience, her kids are her pride and joy, and her dogs – Trash Panda and The Boy Genius – are endlessly entertaining.

Liv can be found on-line at all hours of the day and night at her website, on Facebook, or on Twitter. She also blogs monthly over at Spellbound Scribes. For sneak peeks and previews and other assorted freebies, go HERE to sign up for her mailing list or join the Facebook page she shares with her writing partner Irene Preston, After Hours with Liv & Irene. Fun stuff!