Hi guys! We have M.J. Calabrese stopping by today with her new release Mountainway Chant, we have a great exclusive excerpt and a fantastic Kindle Fire 7 and a copy of Mountainway Chant giveaway so check out the post and enter the giveaway! ❤️ ~Mel~ 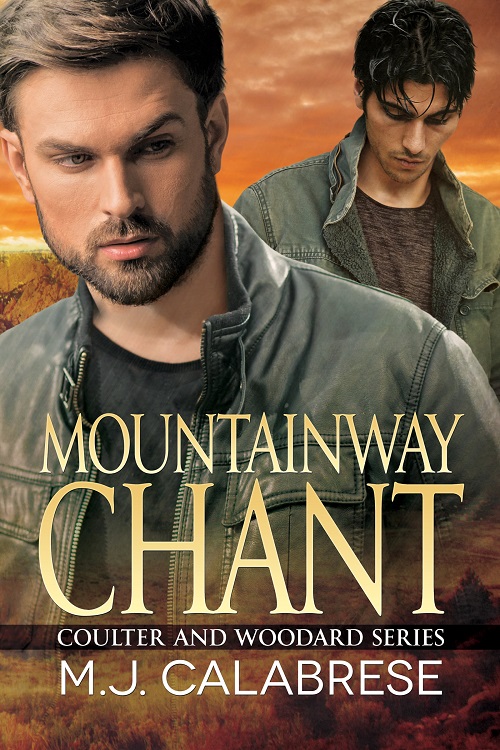 Adam Coulter has returned and is coping with the horrific events of sixteen months ago as best he can, but not everyone is happy about it. His best friend and new husband, Detective Eagle Woodard, doesn’t want to speak to him and it’s starting to look like his fifth marriage isn’t going to be anymore successful than his other four.

FBI Agent Rick Kessler and Navajo Reservation Police Lieutenant Carlos Aiello, Eagle’s cousin, have pulled a reluctant Adam into another case. Five bodies discovered at the site of a planned casino, all dressed and painted up as Native American mythological characters offer confusing clues. Are they dealing with another serial killer?

Fighting to stay clean and sober, Adam’s 12 step sponsor is murdered. At first it seems unrelated to what he saw in the desert, but evidence comes to light that says otherwise. Revelations concerning Adam’s past and his father, Richard Coulter’s, connections to the local crime syndicate boss, Nelson Greybill, creates even more chaos.

Can Adam repair the damage he’s done to his relationship with Eagle so he can help him solve this case? Can he win back the only man he’s ever truly loved, or will the demons of his past win the battle for his soul?

PLEASE NOTE: This is the second book in a continuous series. For full enjoyment please read Warrior’s Way before reading Mountainway Chant. Contains murder and mayhem, as well as dealing with an alcohol and drug addiction. If these are triggers for you, please skip this one!

Crow, like all the other scavengers of the desert, had heard Vulture’s call. He had seen their swirling signal high overhead as they reeled and soared on the thermals. The message told of food, newly dead, ready to fill empty stomachs.

Suddenly, a glint of bright light from far below caught Crow’s eye. He blinked as he focused in on the source. Dipping a wing, he dropped toward the light. The green creature moved quickly, almost as quickly as Crow, over the desert floor. It bucked and shimmied as if Cougar was on its heels. Crow drew closer. Cawing his dismay, it was the Shapeshifter, Man, riding within this noisy monster. Crow paced Man’s creation and remembered how Man stole many a meal from Crow and his brethren. Such was the way of Mother Earth. Only the swift and strong survived.

Crow beat his wings hard, putting distance between himself and the Shapeshifter. Crow focused on the dark spot ahead.  With any luck, Man would tire and fall behind leaving the spoils to him.

The Jeep Grand Cherokee barreled down the dirt road. Moving way too fast, it kicked sand and gravel high in the hot desert air. Anyone following behind risked serious windshield damage from the flying debris. The man at the wheel of the 1990 green Jeep SUV had the window rolled down all the way. His burnished brown skin dulled in the morning sunlight by a fine, powdery coat of dust. His long, dark hair whipped around his face by the rushing wind. Only once did his left hand leave the steering wheel to pull a strand of hair out of his mouth. His fingers strayed down to unconsciously trace the long, thin scar that blazed a trail from the corner of his upper lip to the top of his cheekbone, marring his otherwise perfect features.

The man raised his middle finger to push his discount store sunglasses up onto the bridge of his nose. Despite the early hour it was already getting hot. By noon, it would be over 100 degrees, a real scorcher for this late in the year. Switching hands on the bucking wheel, he cranked up the volume on the radio. The words to Runnin’ created by the masterful vocalizations of Adam Lambert overrode the noise of the rushing winds. The words of that song were his truth. He’d run all his life. The time to stop was now. Cranking up the volume, the sound nearly drowned out the noise of the already overtaxed engine as Dr. Adam Coulter pressed down harder on the gas pedal.

Detective Eagle Woodard saw a cloud of dust making its zigzag way across this roadless section of desert. The SUVs and trucks nearby circled the crime scene like wagons in days gone by. Their blue lights strobing to mark the place they all gathered. Eagle ran his calloused hand through his short, raven hair before reseating his sweat damp ball cap on his head. He sighed. He had regretted cutting his hair almost as soon as he’d done it. A few weeks ago, too much alcohol and a dose of melancholy had caused him to pick up a pair of scissors. Unfortunately, there was nothing to be done about it now, but to start the arduous task of letting it grow back out.

The older model green Jeep skidded to a halt about 30 feet away, causing a choking cloud of dust to waft over the scene. Eagle raised one eyebrow. Jaw tensing. He barely recognized the man in the SUV. He watched as the man pulled his long, brown hair back into a ponytail, securing it with a black, wrapped-rubber band. An Army surplus, long sleeve shirt covered a khaki colored tank tee. He was surprised to see Adam in such an old vehicle. In the past, Adam wouldn’t’ve been caught dead in anything less than some flashy SUV costing ten times what the late model Jeep cost. The grapevine said a lot of things had changed with his former lover. Rumor had it, he’d lost all his money. Gone were the expensive suits and watches costing over one hundred grand. No more two hundred dollar haircuts. Now he was living in the low rent area of Albuquerque and buying his clothes at thrift stores, and if what he had on was an example, then those rumors might hold some truth. With a smirk, Eagle snorted as he strode toward the dark green Jeep. For a moment, he could almost believe there was a God. It looked like Adam Coulter had finally gotten what he deserved. He had needed something to make him humble. No more silver spoons. No more unlimited bank accounts.

Maria Woodard, Eagle’s mother, told him she’d seen Adam at a local church where they held AA meetings during the day. She said he was quieter, almost shy with her, and sad. That he was very different from the man they knew. She claimed he had cleaned up his act. That he no longer used or drank, but Eagle had seen this pattern repeated over and over in the past. It never lasted very long. He wasn’t looking forward to this meeting, but he knew it was inevitable since the day he’d heard that Adam Coulter had returned.

His husband had disappeared for over a year before returning to Albuquerque, New Mexico. Since his return two months prior, they still hadn’t talked. Adam had tried to contact him repeatedly and Eagle had to give the man props for his persistence with texts and emails. He’d even come to the house one night, pounding on the door, demanding that Eagle open it and talk to him, but he hadn’t. The pain of his lover’s abandonment was still too great. Now they had a crime scene where both would join their skills to solve the murder of the five men lying on the ground in front of him.

The dust covered Jeep’s engine popped and groaned as it tried to cool itself in the growing desert heat. Looking over at the passenger seat, Adam snatched up his iPhone. He was looking at it as he started to open the car door. Suddenly the door slammed back, hitting him hard in the thigh.

Adam jumped. Eyes wide with surprise. “What the fuck?”

Eagle held onto the door, preventing Adam from getting out. “Why are you here? You don’t work for the APD anymore.” The tall, angry man growled.

A deep, familiar voice chimed in behind him. “I asked him to come.” Eagle turned. His cousin, Carlos Aiello, Lieutenant with the Navajo Reservation Police, stepped forward. The two men stood apart, bodies tense, readying for the fight. Their eyes locked on one another, each Alpha male testing the other’s resolve.

Quickly evaluating the situation, Adam sighed, “I think I’ll stay here until you two get done with your pissing contest.”  He relaxed back in his seat. One hand rubbing the sore spot on his leg. He knew he had to tread carefully here. M.J. is giving away a Kindle Fire 7 and a copy of Mountainway Chant!!