Hi guys! We have Jim Austen visiting today with the tour for his new release Murder At Oakschott Hall, we have a great excerpt and a fantastic giveaway so check out the post and enter the giveaway! ❤ ~Pixie~ p.s. keep an eye out for my review posting 8th March! 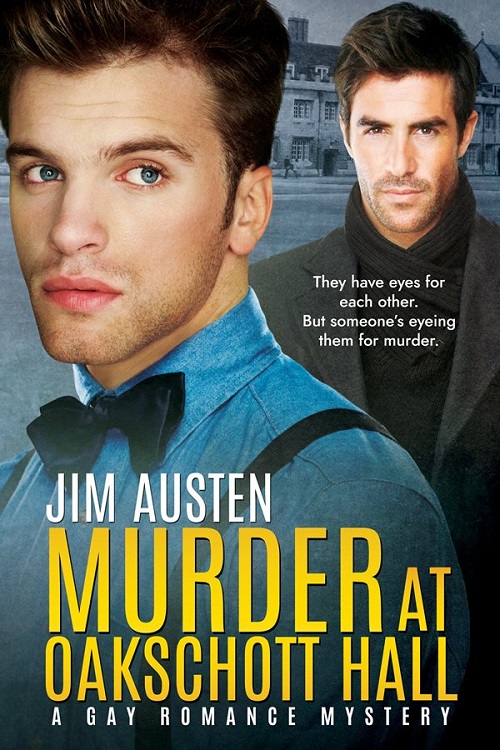 In the Junior students’ dormitory at Oakschott Hall, a heavy gaslight falls from the ceiling, crushing the head of a student sleeping beneath it. Was it simply a tragic accident? To avoid publicity, the Headmaster asks Colin Revell, a young Oxford University graduate and former Oakschott student, to quietly investigate.

But when another student dies—diving at night into an empty swimming pool—murder is suspected. Students and faculty all come under suspicion, and rumors proliferate when Scotland Yard intervenes. Meanwhile, during all this confusion and wild theories, the murderer sees Colin and Max as threats. Unbeknownst to the two lovers, their lives are now in danger.

Colin sat at his desk in his Islington lodgings on a murky December morning in 1927. He was muscular, handsome, rather clever, and enjoyed a private income of five pounds a week, enough for him to avoid any real work. He was, in fact, just as old as the century and had enjoyed one of those “brilliant” careers at Oxford that are the despair alike of parents and prospective employers. He was an only child; his parents were dead; and his relatives were the usual collection of retired colonels and tea planters who, from their semidetached homes on the outskirts of London, eyed him with as little relish as he did them.

His unassuming ground-floor bedsitter looked onto a somewhat decayed street within walking distance of the Caledonian Cattle Market. The hour was a trifle short of noon, and the remains of breakfast lay pushed away from him on the table. His purple dressing gown and black silk pyjamas contrasted with the landlady’s furnishings, which, in an ecstasy of admiration for their Victorian antiquity, Colin had allowed to remain where he had first found them. It was a pose but an amusing one.

The landlady, a Mrs. Hewston, thought her lodger rather queer, but as he paid her well and did not appear to mind her stealing his gin, she was glad enough to keep him. When, soon after engaging the rooms, Colin entertained a series of young men in his chambers, Mrs. Hewston complained about the strange sounds she heard in the early hours. Colin, however, having come into possession of pertinent rumours, alluded to her youthful singing and dancing career in the more disreputable music halls in Leicester Square. Mrs. Hewston, recognizing a risk to her carefully tended reputation, acknowledged meeting many young men of Colin’s persuasion in her theatrical career. “They treated me right respectable, they did.” The potential adversaries became fast friends over scones, clotted cream, and gossip.

A clock in the neighbourhood chimed noon. Factory sirens shrieked; groups of children straggled out of an elementary school opposite. And the postman, observing Mrs. Hewston in her basement kitchen, descended the area steps and handed her three letters with a wink: “All for your young gentleman.”

A moment later, the young gentleman opened them. One was a returned article from the Daily Mail (too good for them, he consoled himself); another was a bill from an Oxford tailor equally famous for unaffordable prices and long credit. And the third was the following:

I don’t think we’ve ever met, but as you are an Old Oakschottian and I am the present headmaster of Oakschott, perhaps we can do without an introduction. My friend Simmons of Oxford mentioned you some time ago as a neat solver of mysteries, and as there seems to be one at Oakschott just now, I take the liberty of asking for your help.

Could you spend the coming weekend here? I should be glad to put you up. There will be the final house match on Monday if you are interested.

Colin digested the communication over a second and more potent gin-and-vermouth. Accustomed as he was to receiving weekend invitations, the headmaster of Oakschott was not a host he would have chosen. He disliked schoolmasters and sentimental reunions with equal degrees of intensity, and the two in conjunction raised the most dismal prospects.

Yet the letter was curious enough to give him, after his moment of instinctive recoil, the faint beginnings of interest. The wording was a mingling of friendliness and curtness that Colin, a word fancier himself, could not help but admire. He liked, too, the sentence about the house match, which unleased a fantasy culminating in his congratulating the victorious team in their shower room after the match. And later perhaps entertaining the mildly intoxicated captain of the winning team in his…

But alas, he was lodging with the headmaster.

Then there was the mystery which offered the possibility of drawing him into some new vortex of interest. His soul yearned with Byronic intensity for something exciting to happen. He was twenty-seven and so far, had done nothing in life except win the Newdigate Prize, give a terrifying performance of the Jew in the OUDS production of The Merchant of Venice, publish a novel (of course he had done that), and rake in an unexpected tenner for inventing the last line of a limerick advertising a popular chewing gum.

He was pleased that little affair at Oxford was remembered and still talked about. A rather valuable manuscript had disappeared from the college library, and by means of a little amateur detective work, he had succeeded in recovering it. The whole affair, and the theft by one of the dons, had been hushed up but not without many pleasant compliments to the undergraduate whose versatility bridged the gulf between Shylock and Sherlock.

What tilted the scale in Colin’s mind were the last words of the postscript: dinner jacket. There spoke that rara avis, the headmaster who was also a man of the world. Dinner jacket. The words suggested decent food, perhaps even good wine, and Colin delighted in both. For a moment, he permitted his imagination to soar; then, deciding to accept the invitation, he packed his bag, dressed with care, sent a wire to the school from the post office around the corner, and made the necessary arrangements with Mrs. Hewston Born in 1984, Jim Austen grew up in Murphy, Texas. He graduated from the University of Texas-Austin with a degree in communications and journalism. He works as a news producer for a station in Rhode Island.

Jim lives south of Boston with his wife and two children. A bisexual husband, he ‘came out’ to his wife 10 years ago after the birth of their second child. “My marriage and my gay life,” he says, “have each given me moments of great joy. However, it is a myth to believe a bisexual husband has the best of both worlds.”

Murder at Oakschott Hall is his first M/M romance novel. Jim is currently working on a novel about a bisexual married man called The Unfinished Husband. Win an Ebook Of Murder At Oakschott Hall!