Hi peeps, we have Julia McBryant stopping by today with the tour for her newest release Neon Saturday Night, we have a brilliant guest post, a great excerpt and a fantastic $20 Amazon GC giveaway, so check out the post and enter the giveaway! ❤️ ~Pixie~ 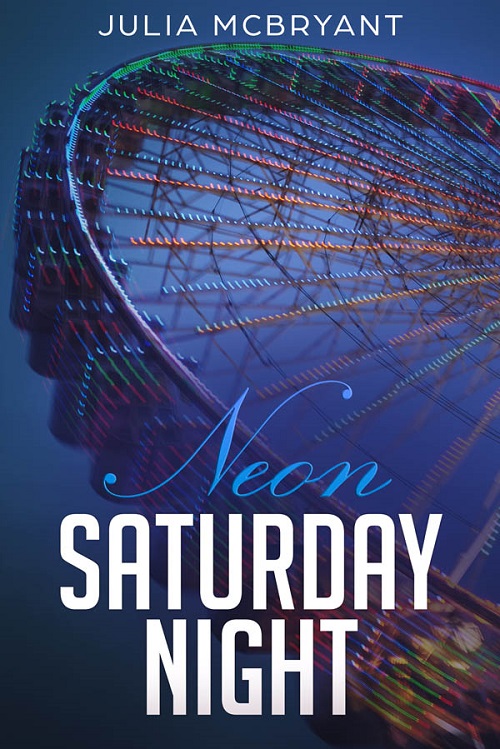 Audie and Calhoun continue their long-distance relationship through college. They sneak off to Myrtle Beach. Audie drives to Charleston when Calhoun gets the flu.

They meet for a fake fishing trip on the Outer Banks. But Audie needs to belong, and because of his traumatic past, he feels like he has little to offer in a committed relationship. While he and Calhoun have fun together, they also have a difficult time negotiating Audie’s need to give as much as he takes and build an authentic relationship together.

Calhoun says his job is to learn to be loved. But Audie wants to be more than a fun top and a tragic boyfriend. 1, This is the first story Jax appears in. He becomes a major character, first in Breaking Point (coming out in December), then in several other novels.

2, He ends up as one of Audie’s best friends.

3, Jax went to an uber-Christian, evangelical school in Macon, Georgia.

4, He’s the youngest of four children, including his twin sister. His parents didn’t know they were pregnant with twins when he was born; they weren’t thrilled to have a spare, even though he’s the only boy.

5, I’d love to share the reasons for his radical dysfunction, but you’ll find out in Breaking Point, unlike Henry, who doesn’t discover those reasons for a very, very long time (though he manages to put together some clues).

6, has an alphabet soup of diagnoses, including ADHD and OCD.

7, He’s the smartest character I’ve ever written, including Audie and Wills, both of whom graduated as valedictorians.

8, Jax would have graduated valedictorian; however, he was caught in an, um, compromising position in the boys’ locker room the week before graduation and not allowed to walk, let alone speak. His sister, ranked second, spoke instead and cried the whole time.

10, He’s also deep-down a gigantic dork, and named his horse Arrakis after the spice planet in Frank Herbert’s Dune novels.

11, He can’t tell Wills and Henry apart, and never learns how to. Ever.

12, He loves dogs, and dogs love him. He has a bird dog named Tristram.

13, He has a bird dog because he also loves to shoot pheasant. Hunting necessitates, like any good Georgia boy, a shotgun collection. Like most Southerners, he may have a gun cabinet, but they aren’t stored separately from bullets.

14, Despite this, he believes in strict gun control.

15, He’s probably used more recreational drugs, of more varieties, than any of my other characters. That includes party-boy Quinn Rutledge.

16, He’s also been legally prescribed more controlled substances than any of my other characters, including Isabel Sims.

17, He has freckles everywhere.

18, He’s one of those people who totally hates social media and refuses to get a Facebook account on principle. This drives Henry crazy, because of course Henry adores Facebook.

19, He and Henry are not only loud in bed, they’re also yellers. This makes Wills insane. Jax lives with them after their sophomore year (Jax’s freshman year), and Wills can hardly deal. He wouldn’t be able to if not for Crispin moving up to Athens.

20, Wills and Jax once got into a drunken fistfight over a game of Trivial Pursuit. They are now banned from playing it ever again. Henry knows better than to share this information with Calhoun. Jax and Wills also scream at the TV during Jeopardy! and have been known to make Crispin keep score. “You know what it means to be hurt,” Jax says finally. “I don’t know what hurt you, not really. Same’s I talked around it and didn’t tell you all of it, not the whole truth or the real part of it. But you know. You saw it right away and so did I. Henry and Calhoun don’t know what that means. That’s why they can try to put us back together and maybe it’ll work and maybe it won’t.”

“I’m afraid of sharks,” Audie says suddenly. He can’t hold it suddenly, can’t stop it. “But I’m really just afraid of the ocean and I swore I’d never get in it again.”

Jax cocks his head at him. “Someone did something to you.”

Audie tells him about his father and the pontoon boat in the Charleston harbor, about being eleven years and told to swim, just swim to his daddy and they could go home, about the four hours of sheer terror, the thirst and his father’s laughter. ‘

“You can. And you need to tell Calhoun this story.”

“I’m not telling Calhoun this. I never should have told you.” Audie casts again. He tosses an empty back up above the high tide line.

“Henry taught me I owe him the truth.”

“I told him the truth. I have a shark phobia.”

“You didn’t tell him shit and we both know it, Currell. Same’s I told Henry I slept around. I told him something. I never told him why. Never told anyone why.”

Jax looks over the horizon and squints into the sun. “I was fucking lonely, Audie, the hell do you think?” He straightens up. “How deep will you go?”

“I’m not your father and you’re not eleven. Do you trust me enough to tell me that fucking story?”

“Did I trust you enough to tell you why I slept around?”

Audie stares at the vast expanse of water and wonders at its secrets. “Yes.”

“Then trust me enough not to get your ass eaten. I’ll go ahead of you so you know there’s nothing there.”

Audie begins shaking. But he looks at Jax and realizes that he’s right, for some goddamn reason he does trust him. Jax takes his hand. It’s not sexual; it’s not the way you hold the hand of a lover. More the way you’d lead a blind man, or the way Audie imagines a preacher leading someone down into a river. But Jax holds Audie’s hard firmly and takes him into the water, one step at a time. Audie looks down anxiously, watches his feet. Jax suddenly laughs and points. “See the teensy ray?” he asks, the water at their knees. “Like a little pancake.” And it is, small and gray. They keep going until they stand up to their waists when the waves come in. “You’re safe,” Jax says. “Look how clear the water is.”

Audie stops. Turns. He can see in every direction. He looks. There are no sharks. None that he can see. He knows there are sharks, knows it in his bones: this is Nag’s Head, the Carolina coast, sharks up and down it, black-tips and makos, duskies and sand tigers. But the sharks are far away, and the chances of them hurting him so small. He stands and dives. Stands. Dives again. Suddenly he’s swimming, swimming strong, the way he learned as a boy in the Low Country, in the creeks and estuaries of the Cooper River. Jax swims next to him. Audie flips, backflips. He rides the waves and swims under them, a part of this vast, mysterious thing, just one more creature in this strange universe governed by the pull of the moon. A world of undrinkable water, of whalesong, of menace and beauty, crashing whitecaps and glass-calm. Jax doesn’t leave him alone. They finally swim back to shore.

“And you never have to be again.”

“Your trunks are wet,” Calhoun says, when Audie comes into the living room.

“Do you want to go swimming?” Audie asks.

Calhoun scrambles to his feet. “I’ll put my suit on.”

They hold hands as they walk into the waves. When the waves roll at their chests, when the water is clear, after Audie looks around them, he wraps around Calhoun, tips his chin to the side, and kisses him hard. They hold each other as the saltwater crashes in front of them, as they bob in the waves. Audie feels Calhoun harden in his suit, tent it out. “That was the best kiss ever,” Calhoun says, when Audie sucks his lower lip and pulls back.

Audie does a backflip. “Why?” he asks, when he comes up.

“Because you weren’t afraid anymore.”

Calhoun touches the bottom and leads him out of the water. They walk right to the bedroom and take off their suits. Audie sheds his rashguard.

“Now we can,” Calhoun breathes.

They fall into the bed, side by side, hair still soaked. Audie wraps around Calhoun and kisses him. And he tastes like seawater, oh god he does, like the ocean, like all the secrets of undiscovered whales and unknowable depths, of dolphin names and even the distance tang of shark menace. But Audie knows now you can’t have one without the other: the fear makes the beauty bloom, magnifies it from the everyday to something wild and perfect. He sucks Calhoun’s lower lip the way he likes. Audie doesn’t close his eyes to Calhoun’s beautiful sun-browned skin, blond beginning to streak his wet mermaid tangles.They press against one another, both hard, Audie almost overcome by the sudden depth of his need.

The Southern Seduction series chronicles the interconnected lives of a group of well-off, high society young adults in Savannah, Georgia, most of whom have known each other since kindergarten. Their complicated relationships (and unconventional sexcapades) form the meat of the series, along with a careful attention to chronology, character, and prose. More than romantic erotica, the Southern Seduction series details a fully realized world of drama, theme, and most of all, memorable characters. Julia McBryant is, as the saying goes, Southern born, Southern bred, and when she dies, she’ll be Southern dead. When she’s not riding her horse or writing, Julia likes to play with her German Shepherds and rescued greyhounds, make all the crafts (especially those involving glitter), and hike, especially in the North Carolina mountains. She is grateful her husband tolerates both the dogs and the glitter.

However, she spends most of her time writing like tomorrow won’t arrive, like she needs it to survive, every second she’s alive, etc. (see Hamilton for details). She also lives to sing in the car, especially David Bowie.