Hi peeps, we have J.C. Long popping in with the tour for his new release On Andross Station, we have a great excerpt and a fantastic $10 NineStar GC giveaway, so check out the post and enter the giveaway! ❤ ~Pixie~ 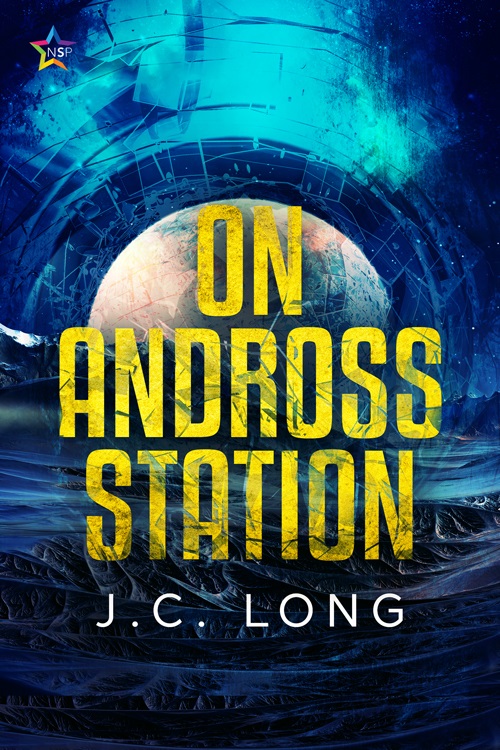 Hikaru Adachi has come to Andross Station to discover what happened to colleague and fellow Inquisitor Katya. Thane, a tracer, has arrived at the station seeking a bounty on Galen Horn, one of the Unity of Planets’ most wanted men. They will find their paths cross as their interests intersect, and soon they are on a hunt that is more dangerous than they know, for Horn has enlisted some dangerous allies, including one from Thane’s past. If Thane and Hikaru together can’t bring Horn down, he will set in motion a plot that will see the entire station destroyed in an attack of massive proportions.

One second the café was calm, the next it exploded into chaos. Tables flew and chairs tipped and slid over the floor as people scrambled away from sudden gunfire. Only one person at the café seemed to maintain her calm. She dropped behind the table she sat at, taking shelter from the bullets. The shooter moved with purpose, seeming to seek an angle to make her his next victim, but she was not going to be so easily caught off-guard. She drew her legs back and then slammed them into the table as hard as she could. The table, made of some sort of ultra-light plasteel material, soared, slamming into the gunman’s knees. The woman jumped to her feet, efficiently disarming the shooter before pistol-whipping him with his own gun. With a harried look, she walked away from the café.

“Rewind image five seconds.” The hologram projector obeyed Hikaru Adachi’s command, playing back to the moment right after the woman disarmed and incapacitated the gunman and looked toward the camera. “Freeze image.” The image’s movement halted. Hikaru squinted, focusing on the woman’s face.

This was the last moment recorded of Katya—no other camera in the station caught sight of her. It was as if she walked out of the frame and then disappeared. No matter how many times he combed through the security footage, he couldn’t find a single sign of her again.

“We will be arriving in just under two standard hours,” answered the “voice” of his personal VI, which he called Vi. It was a generic voice, free of any identifying inflection, the same sort of VI used throughout the Unity of Planets for ease of communication. The voice was easy for those not accustomed to speaking Terran—not too fast, not too slow. Only Hikaru could hear it, its “voice” processed directly to his brain.

“Note that access to some of the information is listed as restricted,” the AI informed him, as it did each time he asked to access it. “Most recent updates to assignment were made twenty-nine standard hours ago.”

That time significance was not lost on Hikaru, even though it was probably lost on the VI. She’d received an update on her assignment an hour before the shooting at the café. It was unlikely to be a coincidence.

He examined the material on a secure personal access point, as was proper protocol. It didn’t do much to alleviate his confusion. According to the files, Katya was assigned to Andross Station to monitor what might be a hotspot for subversive activity—not much surprising; Katya was, like Hikaru, an Inquisitor, enacting the will of the Unity of Planets as they were ordered. Inquisitors often found themselves in the role of watchdogs, keeping an eye on pockets of discontent that might boil over into open rebellion. The assignment was classified level two—which meant discontent was high, and in certain conditions might spill over into violence.

Twenty-nine hours ago, it was upgraded to a level four—danger imminent. After that, everything was sealed. When given the assignment to investigate Katya’s disappearance, Hikaru was granted a temporary higher security clearance, which gave him access to one more piece of information, and it was probably the most critical piece he could get: approximately thirty-one hours ago, the Unity learned that Galen Horn, a notorious terrorist and murderer, was on his way to Andross Station. Two hours later, the threat level was upped, and an hour after that, Katya was gone.

Hikaru didn’t believe in coincidences. Galen Horn was somehow related to Katya’s disappearance. If the connection was there, he’d find it. He was one of the best; it was why they sent him.

Hikaru disconnected the data stream with a sigh, sat back in the chair, and stared at the bulkhead of the small fast-cruiser all Inquisitors used to convey themselves to their missions. He’d set out from Engiminon VI with little notice very late in the night; when an assignment came, you didn’t wait until morning; you boarded the cruiser and set off. Once on board, he opted to review all the material he could relating to the assignment, foregoing sleep. Now he was too close to his destination for sleep to be a valid option.

Instead he would spend the time remaining in his transit to reinforce his psychic walls. Being a telepath was difficult, but it was most challenging on a space station or vessel. People crammed into contained areas while recycled air swept through, carrying the emotional vibrations of every passenger with it. If given the choice, Hikaru would never go to space stations, never make a transit on a crowded ship. But he was an Inquisitor, and he didn’t have the luxury of choice.

He sat on the bed cross-legged and then closed his eyes in preparation for the mental exercises to come.

He spoke aloud to Vi. “Has the station’s security been notified of my arrival?”

“Affirmative. Their head of security will meet you at the docking bay.”

“Thanks, Vi.” Inquisitors and local security or police forces never got along well; the security teams didn’t take kindly to an “outsider” stepping on their toes and taking over. Not that it mattered, in the end. Inquisitors had the authority, and Inquisitors did not work with other forces. The security team would just have to take a step back. They wouldn’t like it, but what they liked wasn’t of great concern to Hikaru.

“Notify me when we begin docking procedures,” Hikaru instructed Vi. With a deep breath, he began building his mental walls, visualizing impenetrable steel panels falling into place one by one, until he was encased in a psychic Fabergé egg. Something told him he was going to need them on Andross Station.