Hi guys, we have Lane Hayes stopping by today with the blitz for her audio release Out in the Offense, we have a great excerpt and a fantastic $25 Amazon GC giveaway, so check out the post and enter the giveaway!  ❤ ~Pixie~ 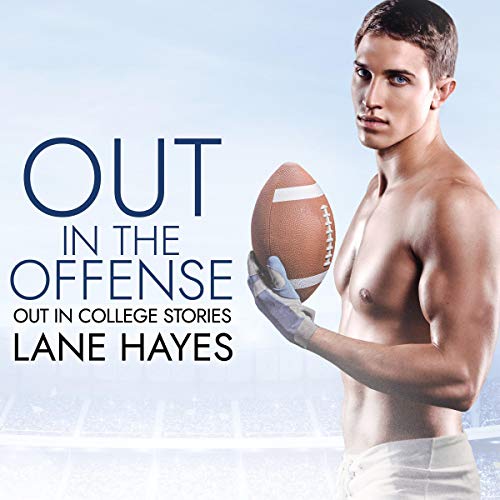 (Out In College 03)
Narrated by Michael Pauley
by

“Can I do anything to help?” I asked, setting my backpack on one of the two barstools at the narrow counter space.

“Nope. As soon as the veggies are sautéed, we’ll be ready to eat. Want something to drink?”

Rory pulled a water bottle from the small fridge behind him and handed it over, then pointed at a basket next to the sofa.

“She’s hiding behind that basket. She’ll make an appearance if she decides you’re worthy. In the meantime, there’s bread in that basket on the counter next to your bag. Help yourself. I’ll bring dinner out.”

I thanked him, then twisted the cap from the water bottle and took a generous sip before rounding the corner in search of the bread. I was ravenous. I bit into the baguette with gusto before turning to check out my surroundings.

Rory’s apartment was tiny. Probably half the size of mine and much older. But unlike the rough exterior, it was…pleasant. Surprisingly so. A short wall delineated the narrow kitchen from the main living area. There was just enough room for a sofa, an ottoman, a TV console, and a smallish television. Two barstools were tucked under the small peninsula by the cut-out in the kitchen wall. The palette was basic “dude”…dark leather against stark white walls, though a large red throw rug anchored the room and provided a nice splash of color. It was simple—but tidy and very clean.

“Your place is cool,” I commented when he entered the room, carrying two plates and a large bowl.

“Thanks. Let’s sit on the sofa. We have more room to eat there,” he said decisively as he set his burden on the coffee table. “Help yourself. I’ll get some forks, napkins, and extra veggies.”

I obeyed and quickly got to work, scooping chicken fettucine Alfredo onto both plates. Rory joined me a minute later, handing over the silverware before taking a seat next to me. I shot a bashful sideways glance at him as I reached for a napkin.

“It’s really nothing special. I make sauces in bulk and freeze them. Then it’s just a matter of adding protein and veggies. By the way, this Alfredo is a healthy version. If you want to drown it in parmesan, feel free. I won’t be offended. Cheers.” He tapped his water bottle against mine and winked.

“Cheers. And thanks again. This is incredible and very unexpected.” I smiled as I twisted the pasta around my fork.

“You’re welcome. You sounded anxious, but you said we’re cool. Are we?”

Rory tilted his head and shot me a challenging look. “Then kiss me.”

“Yeah, now. The other night could have been a fluke. Instead of wondering, let’s get it over with. One kiss should be enough to tell. C’mere,” he commanded, leaning sideways.

I set my fork down and met him halfway until our noses brushed. Then I waited for him to make the next move. He stayed stubbornly still. When I couldn’t stand the growing tension, I pressed my lips to his. And wow…amazing.

Rory was a great kisser. He had the simple art of give-and-take down to a science. He molded his mouth to mine and gently pushed his tongue inside. The connection was sweet but bold. It was more about discovery than possession. I hummed as I snaked my arm around his neck, pulling him closer. He sucked my tongue, then bit my bottom lip playfully before pulling back.

“Definitely not a fluke,” he said with a devilish grin. Michael has well over 50 audio book titles currently available for purchase on Audible.com.  He is versed in multiple styles and genres including fiction (novels and short stories) ranging from romance to science fiction to crime dramas to thrillers; business strategy books; health and wellness books; and even an occasional children’s book. One thought on “Out In the Offense by Lane Hayes Audio Blitz, Excerpt & Giveaway!”