Hi guys, we have Leigh Dillon stopping by today with her upcoming release Raising the Bar, we have a great exclusive excerpt so check out the post and enjoy! ❤ ~Pixie~ 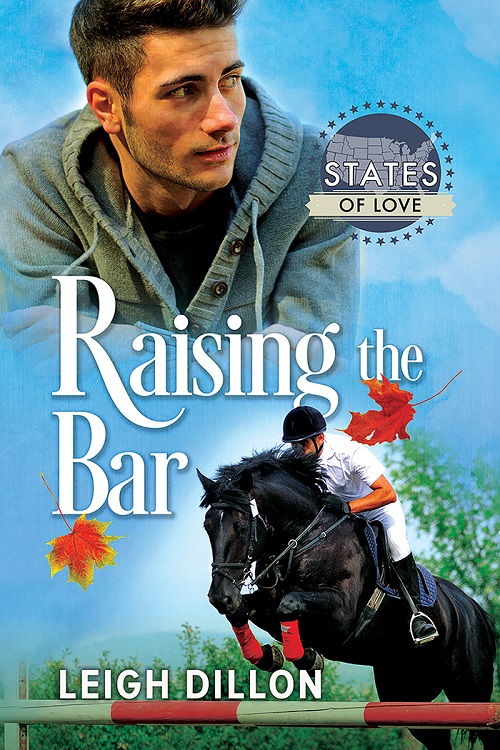 Destin Bellingham has inherited a problem. Thanks to his late playboy father, Destin faces putting a For Sale sign on his family’s historic horse farm. Getting his talented stallion, Black Sambuca, into the Grand Prix show ring would put Bellmeade back on the map—if only someone could make “Sam” behave like a show horse.

Disgraced top rider Tonio Benedetto has his own problems, but he can work magic with difficult jumpers, so Destin hires him despite his bad-boy reputation.  The street-smart, openly gay loudmouth from Miami and the closeted, buttoned-down son of Old Dominion Virginia make a rocky pairing, but time is running out to save Bellmeade from bankruptcy.

Opposites attract, sparks of tension grow into flames of passion. But if Tonio fails to tame Sam, will true love become a lost cause too?

“Nobody can make Black jump when he doesn’t want to jump,” Destin said. “That’s his problem. And you never know when he’s going to stop jumping. He just… does.”

“All he needs is the right rider.” Albert pulled a long, expensive-looking cigar out of his jacket. He had it halfway to his lips before remembering Destin didn’t like smoke. “Sorry,” he said, putting the cigar back.

“I seem to be fresh out of riders,” Destin said. “They’ve been avoiding me ever since Black dumped Brigitte Erlich on her butt at his debut Upperville show and then bucked around the arena like a bronco on crack.” He perched his bottom on the corner of the desk and sighed. “For some odd reason, that seems to have made a bad impression on the riding community. They’re all politely but emphatically not interested.”

“What about that guy who rode King George a couple of years ago?”

“Oh, that’s not his name. They called him that because he was a mad Hanoverian.” Al paused, waiting for Destin’s reaction. “All right,” he said when Destin’s confusion failed to clear up. “Stonebrook Flash. Big bay with one blue eye.”

“Oh!” Destin strained his memory. “That one. The one that looked like he was going to smash through every jump.”

“But he never did. Phenomenal, but he only jumped for that one guy. He’s the guy you need.”

Al squeezed his eyes shut. “Oh God, I can see him. Wiry build, dark hair. Mom didn’t like him. She said he looked like a satyr.”

Images flooded into Destin’s brain. The Floridian sunlight of the Wellington show ring, bright winter flowers clustered around the uprights of ocean-themed jumps, and a trim figure in a navy jacket charging around between them, dragging and sawing at the mouth of a mahogany-bay behemoth of a horse. Every approach a battle, but every leap a triumph.

“Benedetto!” Al announced. “The guy’s name is Tonio Benedetto. Not old country, though. I think he’s from South Florida.” He turned and scanned the bookshelves that surrounded the office fireplace. “You don’t happen to have the last Sporting Horse, do you?”

“Probably. There’s every copy of everything up there. Dad didn’t throw stuff away.”

Al ran his fingers along the packed spines and pulled one out. “Here we go.” He rifled the pages, flipping past ads for saddles and nutritional supplements and photo essays on schooling techniques. “He was December’s rider profile.” He held the magazine, open to the article, out to Destin.

Destin heaved himself off the desk with a groan and took the Sporting Horse. A full-page photograph greeted him of a handsome, smiling young man about Destin’s age. Crystalline-blue eyes blazed, mischievous but intense, from under a neatly cropped head of curly jet-black hair. The long sideburns that framed his pointed face accentuated Tonio’s high, Mediterranean cheekbones, giving him a subtly mythological look. Al’s mom was right. Put pointy ears and a pair of horns on this guy, and he would be a perfect—not satyr, but definitely a faun.

Destin shook the thought out of his head, annoyed. This was not the time or the place. Or the person.

Leigh Dillon is a native of horse-happy North Central Florida but has deep family roots in the Virginia and West Virginia areas. Coming of age in the dinosaur days of cable television, when fledgling channels filled their empty blocks of programming time by airing entire equestrian competitions, Leigh’s young brain became infected with a lifelong mania for show jumping, three-day eventing, and other exotic horse sports. Though tragically denied a pony of her own in childhood, Leigh has wreaked her revenge by including equine characters in almost everything she writes.

A bookbinder and librarian by trade, Leigh has also worked on local thoroughbred horse farms. Leigh’s short fiction has been featured twice in the Florida Writers Association annual story collection, and one of her book-length works received Book of the Year honors at the 2017 Royal Palm Literary Award. When not immersed in writing, creating, and curating books, Leigh maintains a backyard habitat for native bees and butterflies, with a special emphasis on growing milkweed to help maintain the population of monarch butterflies. Despite being in-town suburban, this habitat also plays host to frogs, opossums, raccoons, and the occasional urban armadillo, not to mention a dazzling array of birds. Leigh lives with one enormous black cat, two noisy parakeets, and her long-suffering mother.

You can keep up with her latest writing news and releases at leighdillonwrites.com. | Facebook