Hiya Peeps! We have Layla Reyne stopping by today with the tour for her new release Relay, we have a great excerpt and a brilliant giveaway, so check out the post and leave a comment to enter the giveaway! <3 ~Pixie~ 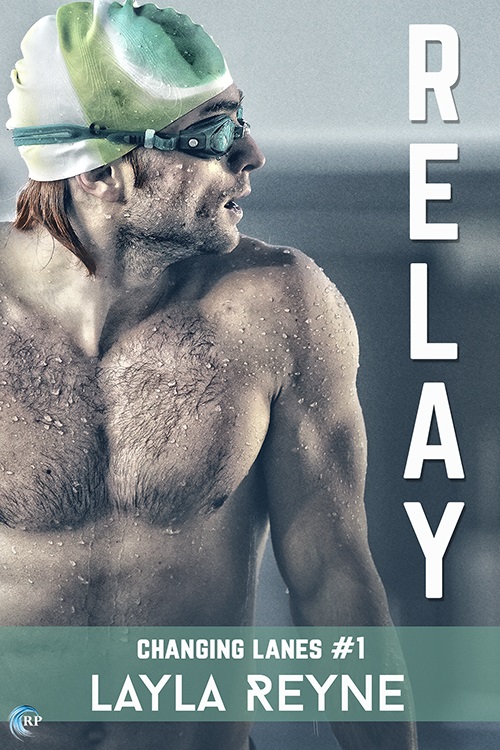 Captain is not a title Alejandro “Alex” Cantu takes lightly. Elected by his teammates to helm the US Men’s Swim Team, he proudly accepts the role, despite juggling endless training, team administrative work, and helping out on the family farm. And despite his ex-lover, Dane Ellis—swimming’s biggest star—also making the Olympic Team.

Dane has been a pawn in his celebrity parents’ empire from crib to pool, flashing his camera-ready smile on demand and staying deeply in the closet. Only once did he drop the act—the summer he fell in love with Alex. Ten years later, Dane longs to cut his parents’ strings, drop his too-bright smile, and beg Alex for another chance.

Alex, though, isn’t ready to forgive and forget, and Dane is a distraction he doesn’t need on his team, until an injury forces Alex to accept Dane as his medley relay anchor. Working together, their passion reignites. When Dane’s parents threaten reprisal and Alex is accused of doping, the two must risk everything to prove Alex’s innocence, to love one another, and to win back their spots on the team, together.

Dane slammed the wall beneath the starting block so hard the tips of his fingers bent back and pain shot down his knuckles. With Mo’s wake a lane over lapping at his side, Dane hadn’t let up, charging hard to the very end of the hundred-meter race. He pushed off the wall and broke the water’s surface, gasping for breath as he tore off his cap and goggles. The crowd roared. He twisted to check the stadium’s giant scoreboard and understood why.

He’d hoped that’s what the ruckus was all about.

“You bastard!” came a laughing shout beside him.

Dane sloshed around to face his grinning mentor. Mo had finished two-hundredths of a second behind him, both of them shattering Mo’s existing freestyle record.

“Not too bad yourself, old man. Madrid, here we come!” Dane clasped Mo’s offered hand and held their arms aloft in victory, the crowd cheering louder. They’d done the same at countless other meets when they’d swum together at UNC, but this was their first time both competing at the Olympic Trials.

They climbed out of the pool, and Mo slapped him on the back. “I’d say you’re healed up just fine.”

Not even a slight twinge of pain. It’d been a while now since Dane had felt any aftereffects of the injury that’d sidelined him during the last Games. “I’ve been back on the circuit for two years. Are you getting senile in your old age?” At thirty, Mo was far from old, but he would be the oldest member of the USA Swimming squad.

“You’ve been back, but now you’re up to full speed. Better than.” He pointed at the scoreboard as they finished toweling off. “That’s what we need. Good job, Ellis.”

Dane basked in the praise, until two swimmers strolled out of the tunnel. Lockstep, arms thrown over each other’s shoulders, the one had a fly-stroker’s massive upper body, much of it covered with tattoos, and blond dreadlocks piled atop his head. Sebastian Stewart, California native and the world’s best at butterfly. The other swimmer was leaner in build, a backstroker, but no less ripped, his light brown skin and dark curls glowing under the arena’s lights.

He’d been scarce since Dane’s return, rumors flying about a sick family member, but there was no mistaking Alejandro Cantu. Dane would never forget that body or those deep brown eyes. Lifting and clashing with his, those eyes were no less captivating in the here and now, freezing Dane to the spot. He was caught, between the past and present, between jealousy and envy, between love and hate.

Bitterness stung the back of his throat, bile surging up on a rising tide of memories best left forgotten, never forgotten. Dane swallowed hard to force it all back down. Harder still when Alex paid him no further mind and returned to carousing with Bas. Thick as thieves, the best friends and former college roommates walked with the easy confidence of being themselves, not caring if Dane, the press, or anyone thought they were more.

Resentment bubbled, at their freedom, and at their nonexistent regard for the world record he’d just shattered.

For the first time in a long while, Dane didn’t begrudge the horde of reporters bearing down on him, or his parents and publicist in the lead. They shouldn’t have been allowed on deck, but “the country’s minister” and home shopping’s reigning TV queen had a way of getting what they wanted, rolls of bills always at the ready. Dane met them at the corner of the pool, close to where Alex huddled with Bas.

His mother, dressed in navy blue Chanel with an orange scarf around her neck, the colors of his home swim club, clasped his towel-covered shoulders in imitation of a hug. “We’re so proud of you,” she said, loud enough for the reporters. Then, on her tiptoes, for his ears only, “Five minutes before they shoo us off deck for the next event. Make it count.”

She lowered back to her stiletto heels and stepped to Dane’s side. His father, in his trademark three-piece suit, complete with red, white, and blue striped tie, gave him a firm handshake. “The good Lord was with you in that pool, son.”

Dane bit back a retort. God had nothing to do with it. Twice-a-day swims with one of the country’s best clubs, plus daily dry-land workouts and yoga, were why he was now the fastest swimmer in the world. No time to argue though, as reporters lobbed questions at him.

“How’s it feel to be a first-time Olympian?”

He slicked back his wet hair, biceps flexing. Cameras clicked and spectators tittered. He hated his role as swimming’s current poster boy, so much of the image a lie that turned his stomach, but it served his purpose in this instant. Alex canted his head toward him, listening.

“Do you think you’ll win your other events?”

He smiled big and drew out his Southern accent, amping up the charm. “Well now, that’s certainly the plan.”

“We sure hope so,” his publicist said. By we, Roger meant the sponsors, who counted on their wares being displayed as much as possible, and his mother, who would in turn feature those products on one of her many shows. A vicious cycle, always turning.

“Will you be team captain?”

“That’s voted on by the team,” Dane said. “But I’d sure be honored if they chose me.” Truth be told, he hadn’t even considered the captaincy, assuming it’d go to Mo or Alex, but he’d play up the possibility to get a rise out of Alex.

“Will you be swimming on the relay teams?”

Before Dane could answer, Alex joined their group, standing at the outer edge, and directly addressed the reporters. “Relay teams are drawn from the top six qualifiers in each event. Lineups will be decided after Trials and announced at Media Day. We’ll look forward to seeing you then.”

“Alex, are you going to win your races?” one of the reporters asked.

Alex glanced over their heads at Dane, barely concealed fury swirling in those bottomless brown eyes. “What was it you said, Ellis? Well now, that’s certainly the plan.”

He had the good grace not to mime the accent. Dane’s manners, however, were lacking. “Buena suerte,” he replied, snidely wishing him luck in diction-perfect Spanish.

Alex’s nostrils flared and red streaked across his cut cheekbones, but before hostilities escalated further, event staffers surrounded the group, indicating their five minutes were up.

“Dane, honey,” his mother drawled. “We’ll see you in San Antonio.” She tugged him down for a kiss on the cheek, pausing long enough for the cameras.

Roger stepped forward, handing out business cards. “Dane and Reverend and Mrs. Ellis will be available for interviews in San Antonio.”

“If you’ll follow me,” Roger carried on, “I’ll get those scheduled.”

Dane’s father gave him another cold, hard handshake, then Roger and the staffers whisked the road show away, leaving only Dane and Alex locked in a stare down.

“Do not bring that shit with you to Colorado,” Alex gritted out.

“I don’t control my parents.”

Alex took two long strides toward him, and Dane’s blood revved at his closeness, then chilled with his next words. “Oh, I’m well aware it’s the other way around.”

“And that’s not the shit I’m talking about. I know I’ll never get the real you.” Direct hit, right to the gut. “But at least leave the poster boy at home. Bring me the swimmer; anything else and we’re going to have problems.”

Alex’s dark gaze swept his body, leaving a trail of fire in its wake. “Don’t I know it.”

“If I bring you the swimmer,” Dane said, “am I on the relay teams?”

“Coach makes that call, not me.”

“I want on medley.” Team USA had lost the medley relay gold by the slimmest of margins at the last Games, and Dane had cursed from his recovery room an ocean away. If he’d only been there. Well, he was here now, and they wouldn’t lose it with him swimming anchor.

Alex’s eyes hardened, glittering. “We can’t always get what we want.”

“But we get what we need?” Dane retorted, unable to resist.

“Not that either,” Alex replied, an iceberg of anger in those three words. He turned on his heel and stalked back to Bas, leaving Dane to sink, shivering all the way to his soul. A chance at gold or a chance at love? Members of the US Men’s Swim Team fight for both in this sports romance duology following two couples on one medley relay team as they train and compete in the world’s biggest sporting event: the Olympics. To reach the top of the podium, they’ll need to depend on one another and be willing to change lanes—in their lives and hearts, and in the biggest race of their athletic careers.

2016 RWA® Golden Heart® Finalist Layla Reyne was raised in North Carolina and now calls San Francisco home. She enjoys weaving her bicoastal experiences into her stories, along with adrenaline-fueled suspense and heart-pounding romance. When she’s not writing stories to excite her readers, she downloads too many books, watches too much television, and cooks too much food with her scientist husband, much to the delight of their smushed-face, leftover-loving dogs. To celebrate the release of Relay, one lucky winner will receive a signed paperback copy of the book and a $25 Amazon gift card!

(Entries close at midnight, Eastern time, on January 13, 2018. Contest is NOT restricted to U.S. entries.)