Nick Bedford coaches the men’s rowing team at California Pacific College, a small liberal arts school in Sacramento. He’s quiet, dedicated—and closeted. He struggles with professional ethics and NCAA rules as he denies his attraction for Morgan Estrada, one of his rowers. While they may not be far apart in age, the difference between coach and athlete leads Nick to worry about exploitation.

But Morgan has desires and a mind of his own, and what he wants is his coach. As the spring racing season advances, Morgan feels his coach’s eyes on him. Morgan may be gay, and while he’s not out to team, he hasn’t hidden it, either. It may be a coach’s job to check out an athlete’s form, but Morgan hopes Nick’s interested in more than his technique.

Morgan corners Nick in the boathouse, and Nick admits that while he wants Morgan he can’t have him. Morgan laughingly points out that he’s not bound by any of those rules and he wants Nick. Nick and Morgan start a relationship, but Nick worries whenever they’re in public: what if someone sees? An anonymous complaint from a rower to the athletics director sends Nick’s worries into overdrive just as the crew prepares for the make-or-break race of the year.

Warning: This excerpt may contain sexually explicit material, please proceed at your discretion.

Coach Nick Bedford watched the eight men—his athletes, sweaty and pushed to the edge, their sides heaving like thoroughbreds—do their best to beat each other on the boathouse ergometers. The ergs, specialized rowing machines that duplicated the rowing stroke almost exactly, were his rowers’ best friends and worst enemies, building their conditioning and strength but also devouring everything they had to give and demanding more. He often shared their workouts, but not today. Today he walked around each athlete’s erg, looking for flaws in his technique. The crew’s coxswain helped him, but he was still the coach. It was his job to get them in shape.

They were a small crew, and California Pacific College was a small school. A former college rower himself, Nick was a graduate student working on his master’s degree in exercise physiology at a not-too-distant state university, and around the boathouse, he did it all. He was the resident expert on bodies in motion, guiding each athlete through workouts on land and water, each designed to make the boat go faster. He was the dietician, trying to keep a group whose natural prey was pizza and beer on the nutritional straight and narrow to build muscle and fuel recovery. He was their sport psychologist, helping them through losses and guiding the young men through the shoals of school, rowing, and life. He spent his free time immersed in exercise science literature, reading, reading, reading—anything to give his men that extra edge.

He even rigged the boats, adjusting the hardware and making minor repairs.

Eight varsity athletes, eight seats in the varsity boat. Nick was lucky they were so competitive, even with each other. Posting their erg scores meant someone would be pulling harder next time. He also had a standing offer to the junior varsity rowers: any JV athlete who beat a varsity rower on the ergs could challenge him for a seat in the boat. He’d only had to make good once. Each of his eight rowers put the “I” in team, each determined to beat the others. For a small program, it was ideal. For eye candy, it was unbeatable.

“What’d you think, Coach?” his coxswain asked, coming to stand next to him.

Nick was lucky. Stuart Cochrane had coxed in high school, and the junior premed major was as skilled as they came. “There’s room to improve,” Nick said, never taking his eyes off his athletes. “Look at Sundstrom. He’s hunching his shoulders. On the ergs, it’ll hurt, but on the water, it’ll strain his muscles and make it hard for him to stay in synch.”

“He’s never going to catch Morgan without fixing his technique, either. I’m on it,” Stuart said. He walked over and knelt next to the large rower, watching intently for a few strokes before correcting him. Stuart returned, his coxswain’s strut even more pronounced.

Nick had to smile. The best coxswains were small and light, so they didn’t slow the boat with weight that wasn’t pulling an oar, and they had Napoleon complexes. Stuart fitted the bill: short and cocky and determined to win. “That worked.”

“Of course, it did.” Stuart smirked. “Keep your eye on Estrada. Have you noticed how he speeds up just a bit during the last two k? That’s part of how he keeps beating Brad.”

“I like a nice, friendly rivalry.” Nick grinned. “It keeps the erg times fast.”

“I’m not sure how friendly it is. Brad was the fastest until Morgan joined the team and hasn’t taken kindly to being beaten,” Stuart added quietly, his voice just loud enough to reach Nick’s ears over the sounds of the ergs. “And some of the other guys are beating him too.”

“Then Brad needs to up his game.” Nick didn’t want to know about rivalries like that. He’d seen crews torn apart by such distractions. So long as his rowers left their differences on the dock when they rowed, he didn’t care. As he’d told Stuart, a rivalry on the ergs would move the boat faster.

Nick returned his focus to the ergs. He’d kept an eye on Morgan Estrada, all right. It was hard not to. Collegiate rowers were in fantastic shape, but something about Morgan drew his eye. He was tall, taller than Nick (who, at six feet, wasn’t short), but then, rowing selected for tall men and turned them into muscular ones. Sweat dripped from one wavy brown lock, running down his cheek, but Morgan ignored it.

Nick noticed it, however. It defined Morgan’s cheek, flushed red with effort, but normally very fair. There was more conquistador than conquered in Morgan Estrada’s background. All Nick’s men were good looking in one way or another, but something about Morgan pulled him in, something that threatened to swallow him whole.

Eye candy was a perk of his job, but Nick tried not to stare too much. They were his boys; he was their coach. There was a trust there, and he took that trust very seriously.

Still, watching Morgan strain, sweaty and grunting and red, made Nick think of crossing that line. 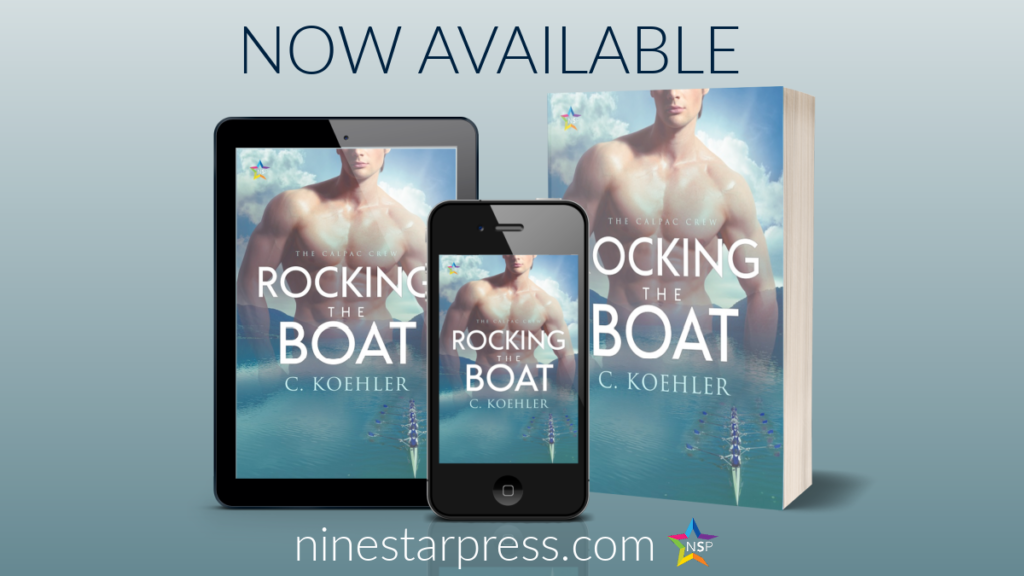 Christopher Koehler always wanted to write, but it wasn’t until his grad school years that he realized writing was how he wanted to spend his life. Long something of a hothouse flower, he’s been lucky to be surrounded by people who encouraged that, especially his long-suffering husband of twenty-nine years and counting.

He loves many genres of fiction and nonfiction, but he’s especially fond of romances, because it’s in them that human emotions and relations, at least most of the ones fit to be discussed publicly, are laid bare.

While writing is his passion and his life, when he’s not doing that, he’s a househusband, at-home dad, and oarsman with a slightly disturbing interest in manners and the other ways people behave badly.

Christopher is approaching the tenth anniversary of publication and has been fortunate to be recognized for his writing, including by the American Library Association, which named Poz a 2016 Recommended Title, and an Honorable Mention for “Transformation,” in Innovation, Volume 6 of Queer Sci Fi’s Flash Fiction Anthology.