Hi guys! We have Damian Serbu stopping by today with his new release Vampire is a Vampire, we have a great excerpt and a fantastic $10 NineStar GC giveaway so check out the post and enter the giveaway! ❤ ~Pixie~ 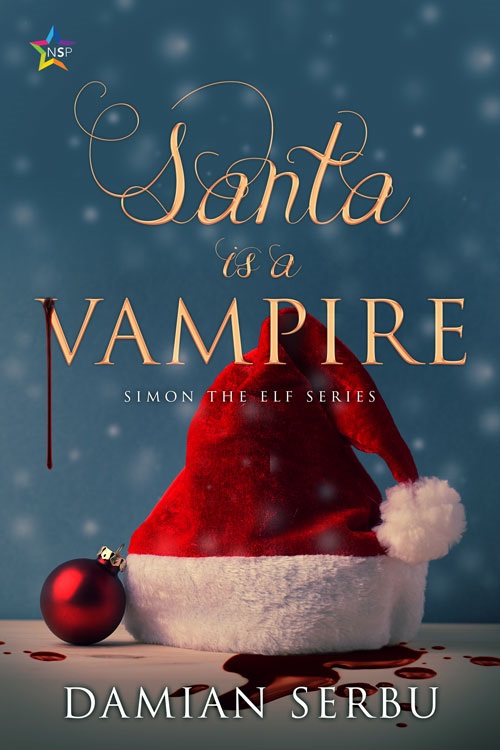 Santa is a Vampire

Simon the Elf wants to tell you the true story behind Jolly Ole St. Nick. Yeah, he’s a vampire. But that alleged gift giver and lover of children hides more than that fact from you. And what about Mrs. Claus and Rudolph? Venture into a world of enslaved elves, enchanted animals, and death wrought by Santa himself. With his sharp wit, Simon will lead you into the darkest realms of Christmas. Warning: Simon cusses a lot. But you would, too, if Santa held you captive.

Santa is a Vampire, Damian Serbu © 2018, All Rights Reserved

If you only knew the real story behind Santa Claus. He keeps it buried for a reason, after all. Because you’d hunt him down up there in his North Pole ice castle if you even had a remote idea regarding his real identity.

Mrs. Claus and Rudolph too. Well, maybe not the missus. It’s complicated. But more on them later. Back to Santa.

Let’s peek in on this esteemed man who brings gifts to children and represents the blessed holiday of Christmas, shall we? He would kill me if he found out I leaked this information. Well, I intend to leak it, no matter the consequences, because I’m keeping this in a journal. If you’re reading it, I probably succeeded. Which means dead Simon the Elf, for sure, if he discovers me telling people any of this information. But death might improve my situation since this enslavement sucks big ones. I started this secret blog and will release it without concern for my well-being.

So, if you’re reading it, I’m probably dead.

This first little story will tantalize you, get your feet wet with everything I want you to learn.

It’s late November, so Santa moves around a lot more freely because everyone expects to see him out there, greeting the children and gathering their Christmas orders. A lot of fools dress up like him to please the little kiddies or earn a buck. Everyone sees these fake Santas everywhere they go. Good enough for the real Santa Claus, because it hides him. He appears as another of the fool Santas walking about during the holidays.

That and his silly outfit disguise him—What a costume he picked!—but again it serves his purpose well. The ridiculous beard and red outfit mean Christmas cheer, presents, and a happy fat man coming to spread joy. Of course, he manages a real beard and authentic outfit to intensify the experience when people meet him.

Do you know why he wears red? I do. It hides the blood stains better. Okay, confession time. I’m throwing out my theory, but don’t ask for proof. He never said that or explained the red. It just makes sense to me. Even though he usually cleans the blood up. Oops. Getting ahead of the story again. Let’s take a deep breath and refocus.

By the way, in case you require my credentials, I’m an elf. Trapped against my will to do Santa’s bidding. More later.

Okay, focus. Late November. Turkey Day’s come and gone and Santa enters prime time. He creeps out of the ice palace, chains the poor reindeer to the sleigh, and speeds away, with a couple of elves, including me, enchanted in the sled against our will. We never know, until he issues a command, what he intends for us. Sometimes we ride along to keep him company; sometimes we get clean-up duty; sometimes we have to help.

We fly over various parts of the world, almost land in Germany until Santa spies one of those Secret Hunters. “Dangerous. Let’s go someplace else.”

“Scared, are ya?” I glance over at him. “Ouch!” Santa backhands me. It’s another curse of mine, but one I came to elfdom with. See, I’m a bit of a smart-ass and can’t hold my tongue. Gets me in trouble a lot.

“Let’s find someplace more hospitable.” Santa instructs the reindeer to change course and never answers my question. But I suppose the slap upside the head could be considered an answer, of sorts.

To America, the land of advancement and scientific reasoning. I recognize the coastline right away. Why, even the hardcore Christians dismiss Santa as a legend based on an alleged saint from the past. Saint, indeed. But such thinking helps hide his true identity.

We swoop over New York, but Santa seldom likes to hunt there because it doesn’t really present a risk. Masses of people living on top of each other, often killing and dying without his assistance. Where’s the challenge in hiding a body in that mess?

Moving right along, the reindeer glide over the little town of Wilmington, Ohio. It offers Santa everything he desires. I know from experience. Remote. Tranquil. Peaceful for the most part. Until a dead body materializes right in the midst of the holiday cheer. Santa’s way of taking a dump on Season’s Greetings in a happy little community.

So Santa guides the sleigh over Wilmington College and sets it down in the town cemetery. We can’t land on roofs yet, without people wondering if Santa’s calendar got all out of whack. Few people enter a cemetery in the midst of a cold November so we can hide out here.

He orders the reindeer to shut up, except Rudolph, who gets to run and do his own thing. He trots off with his bright-red nose high in the air. The other reindeer stay here. I often wonder if anyone questions the sudden appearance of reindeer manure where no reindeer exist. Of course, even if they thought about it, no one would come to the conclusion that Santa hid his sleigh and reindeer in the cemetery for a spell. Because most over the age of seven don’t think he exists.

Once he gets the reindeer squared away, Santa tells a couple of my fellow elves—two I think are big assholes, so you know—to watch the sleigh and get the hell out of Dodge if anyone shows up. Santa can summon us from afar, so no worries there.

Me? I get the distinction of tagging along with him. He makes me his personal assistant on these sublime missions because he knows how much I despise it. The killing. The secrecy. And his perfect disguise of being Santa. Well, this pains me to admit, but I think he also enjoys my company for some twisted reason, especially my mocking of him and constant chatter. We have a complicated relationship, to put it mildly, compelling him to keep me close, no matter how much I detest it.

My compadres snicker as I run along to keep up with Santa. I take a second to stop, turn around, and give them the bird.

We saunter right down Main Street and wave at the passing cars when they honk. I almost puke every time he lets out a jovial, “Ho! Ho! Ho!” Little kids run up to him and say hello, followed by asking for presents. He feigns delight and interest while holding back an inclination lurking beneath the surface. Sweet little kid blood.

We get far enough away from prying eyes to meander down a residential street. Then we wander around while Santa scouts the houses and makes an assessment of our target. This goes on for a couple hours, until most children lie sleeping in bed. Even most adults are passed out by now.

One car zooms past. I wonder what they think, seeing Santa amble down the road amidst these houses, lit up for the holidays. Do they think it’s someone’s dad, surprising the kids in disguise? A hired dude going to a party? Maybe it’s a stripper, dressed for the occasion until the ladies (or men) demand the pants and coat come off?

Nope. It’s the Real McCoy. And the lady behind curtain number one, alone in her house as she waits for her husband to get home from the night shift, just became dinner. Okay, I have no idea if a husband on a night shift exists. I lied to make the story better. But the woman sits alone in this normal-sized house. Looks like she’s dusting or cleaning something.

Sometimes Santa walks right up to the front door. Knocks or rings the bell, and the fools open it for him. Listen, even without Santa’s hidden reality, who opens their door for a dude in a Santa outfit unless you’re expecting the stripper I referenced?

Anyway, no front door this time. Or back door. Instead, he touches the side of his big-ass nose, grabs me by my neck, and yanks me along as we fly through the air, land on the roof, and plunge into the chimney. He could get in the fucking house any way he wants, by the way. He does the blackened chimney thing for two reasons. One, for effect. You know, back to living up to the legend and playing by the rules. Despite the fact the sleigh and reindeer remain hidden among the dead in the cemetery and not up here on the roof with us. No one will question a big guy in a Santa costume plopping into their fireplace and shouting out a “Yo!” It may startle them, but since it conforms to the legend, people tend to go with it. Idiots. Two, he does it tonight because I hate it. I hate heights. I hate flying. And I hate when he touches me.

We hit the fireplace grate and roll out onto the carpet in the living room, where we stand in triumph before the poor woman, who gives a yelp. Actually, she screams bloody murder.

“Shh, my dear one. Shh!” Santa puts his finger up to his lips and winks at her. “Nothing to fear. I imagine you didn’t believe in good ole Santa anymore? Adults so seldom do these days. But as you saw from my arrival through your chimney, I do, indeed, exist!” Santa sweeps his arms out with a flourish, to indicate his body and presence in the flesh.

The woman stops screaming, thank God, before my eardrums rupture.

“And this here is my worthy assistant, Simon.”

“I’m not here because I want to be—” Santa clamps his hand over my mouth and glares a warning. Right. I’ll stop, because getting locked in the ice dungeon when we get back to the North Pole totally sucks.

“Is he all right?” she asks him and points to me.

This is what gets me so pissed off. Stupid fucking people. I want to shout back at her. Hey! Lady! Wake up! A big fat ass plunged down your chimney with a little elf under his control. You scream, but because he wears a red suit and laughs and has a crazy beard, you relax and engage him? Trust me. You do not want to engage him! 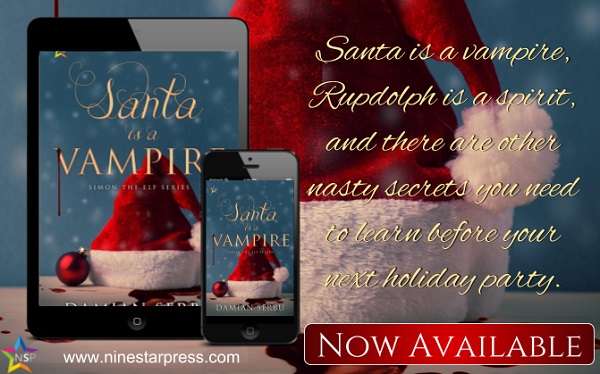 Damian Serbu lives in the Chicago area with his husband and two dogs, Akasha and Chewbacca. The dogs control his life, tell him what to write, and threaten to eat him in the middle of the night if he disobeys. He has published The Vampire’s Angel and The Vampire’s Protégé with NineStar Press. Coming later this year from NineStar: The Vampire’s Quest. 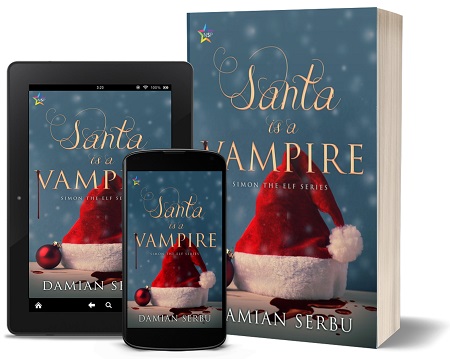