Hi guys, we have V.L. Locey stopping by today with the tour for her new release Shake The Stars, we have a great excerpt and a brilliant giveaway, so check out the post and enter the giveaway! ❤ ~Pixie~ p.s. keep an eye out for Prime’s review coming soon! 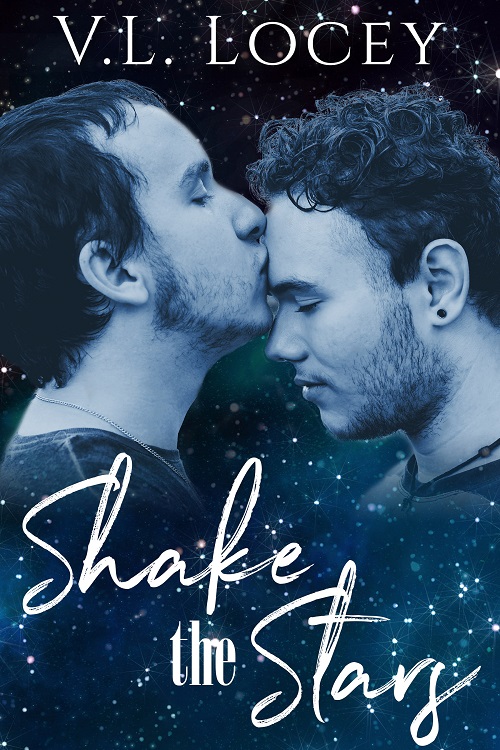 Spending time in the Poconos with his family was the last thing Dane Forrester wanted to do over the summer. He had dreams of spending his last break touring Europe and gathering story ideas for his upcoming creative writing classes before heading to college. Maybe even finding that elusive first love in a small café in Paris, or along the Rhine, or even in a sultry villa in Italy. But no, he was stuck at the Silver Fir Lodge with his family where his dreams of romance and passion would wither and die a slow painful death, or so he imagined.

When all seemed lost, the budding wordsmith is saved—in more than one sense—by Khalid Novak, a lifeguard at the lodge’s pool. Khalid is two years older, a bit more sophisticated, and the most incredibly alluring thing Dane has ever seen. The two young men find themselves joyously wound in a searing romance that teaches Dane that love can be wildly intense yet fleeting so one should revel in it when the discovery is made.

Can this summer romance survive the chill of autumn as well as the winds of time? Watching the city slowly drift away filled me with remorse. Sure, I’d wanted to see Philly disappear, but from the window of a plane, not through the back window of our car. I sighed yet again and turned to face the front. Sitting next to me, my younger brother James was prattling on about this event and that event at the lodge. I tried to tune him out, but he had this kind of nasally way of speaking that was grating my already ragged patience.

Mom looked back at us and smiled. I gave her a grin in return even though I wanted to weep in frustration. She’d meant well. I knew that. And how long had she saved up for this summer at Silver Fir Lodge? Years probably. At eighteen and recently graduated from high school, I was old enough to appreciate the gesture. But three months in the mountains bored out of my head with James as my only companion? Ugh.

“I’m so excited about this!” Mom said, her green eyes glowing with pleasure. “Dad will only be able to stay on the weekends, but we’ll be just fine during the week, won’t we?”

“Sure, you will,” Dad interjected, his gaze a dark blue. James and I both had hazel eyes that kind of lacked the spark of either blue or green. Which was rather how I best described myself. Dane Forrester. Talked into saving the money gifted to him by his grandparents for graduation from high school for books and food and other important and responsible things for the fall semester at the University of Pennsylvania. Dane Forrester lacked spark. He was devoid of spark. Sparkless. I wasn’t sure that was a word, but it fit well so I’d use it. Creative writing was all about originality or so my English teacher, Mrs. Crafton, had told me. “With these two big tough men to protect you.”

“I highly doubt I’ll need protecting.” Mom giggled, looking back to Dad. I slumped down in the seat and frowned at my brother. James flipped me off. I was too depressed to slap him upside the head. Also, men headed to college in the fall did not slap their brothers upside the head. At least not when they’d get caught. “The online information said this is one of the premiere lodges in the Poconos! They even had headline comedians during the summer like Don Rickles, Foster Brooks, and Lenny Bruce. You don’t get names like that if your lodge is crime-ridden.”

“True, true,” Dad said as we merged onto Route 476. I felt as if I’d been mysteriously thrown into a time warp that had dropped me into the sixties after I googled who the hell Foster Brooks and Don Rickles were.

“I swear if there’s a sexy dance instructor and some girl named Baby at this lodge I’m coming back home with Dad,” I mumbled then shoved my earbuds in to listen to some Daughtry and Usher. You know, music from this century.

Mom reached back to pat my head. Dad gave me a look in the rearview mirror. I settled into the seat and tried to be less the petulant child and more the man everyone now expected me to be. It wasn’t easy, but by the time we stopped for a piddle break—Mom’s words not mine—midway through the two-hour trip, I’d managed to work up a little enthusiasm for this endless summer vacation. If nothing else, I’d be able to write. I had all summer. Hell, I could probably pen a damn novel in those tedious ten weeks stuck at Silver Fir Lodge. Thank God I’d packed my laptop.

“Can I have a word?” Dad asked as we stretched at a rest stop. Mom had disappeared into the ladies room and James was trying to decide what kind of candy bar to buy from the row of various vending machines. It was a beautiful June day. Low humidity, temps in the mid-seventies.

He walked over to stand beside me on the curb.

“Look, Dane, I know this isn’t exactly the summer that you’d planned.”

I glanced at the tall, lean man in a polo shirt and tan shorts. I was nearly as tall as him now. That never ceased to amaze me. As a little boy, I’d wanted nothing more than to be as big and strong as my father. I was almost as big and probably a little stronger now but that was probably all we had in common.

“No, not really,” I confessed as a soft wind moved over us, stirring up a little dust devil that whirled around the parking area for a second before dying out.

“I get that. Europe would be so much more fun than spending all summer in a dusty old lodge whose heyday was back when Sammy Davis Jr. was hot, but your mother saved and scrimped for this for you since the day you entered kindergarten. All her extra cash went into the “Boy’s Big Trips Jar” hidden inside her sewing chest. She’s not handling you two growing up well.”

“Yeah, I know.” I shoved my hands into the pockets of my cutoffs and rolled up to my toes.

“James will be fourteen next month and you’re going away to college. She’s feeling a little lost and unneeded.”

“I’m like fifteen minutes from home,” I reminded a parent for the eight thousandth time and got that soft eye roll of his.

“I know and that’s a help, but she’s struggling. She’s invested everything she is into you two boys. She gave up teaching to raise you both.” I closed my eyes and soaked up the warmth of the early summer sun on my brown hair. “If you could just try to be a little less cranky about her graduation gift to you, it would mean a lot to her…and to me. Sometimes being an adult means that you have to set aside your own wishes to make others you care about happy.”

I blew out a slow breath through pursed lips. “I know. I’m sorry I’m being such a jerk. I’ll try to act happier for her. I do appreciate the trip. I really do. It’s just…”

How do I tell him that I’d been hoping to find a cultured, sexy European guy to fall in love with? They had no clue that I was gay. No one did. The Catholic school that I’d attended really didn’t have any kind of LGBT counseling or groups to attend and learn how to tell your folks you were gay. And if any of the other kids were like me, they hid it as deeply as I had. I had no peers who were gay and no friends who were either. Which was why the trip abroad was going to be me breaking free of my shell as I began to learn who Dane Forrester really was.

“I get it.” He draped an arm around my shoulder. “But you’ll have plenty of time to chase girls once you’re living on campus.”

Ugh. Just ugh. He tugged on my shoulder roughly. “Thanks for being such a good son, Dane. Your mother will treasure this summer.”

She then appeared, smiling at Dad and me, her brown hair shining and her smile wide. She was summery and slim, her dress bright yellow and her sandals white. She was still so pretty and so giving. I was a greedy dick for sulking and whining like a four-year-old. Dad was right. Growing up meant we had to stop thinking about our wants and needs all the time.