Hi guys! We have E.J. Russell stopping by today with the tour for her new release Silent Sin, we have a fantastic guest post, and a great excerpt so guys check out the post and enjoy! ❤️ ~Pixie~ 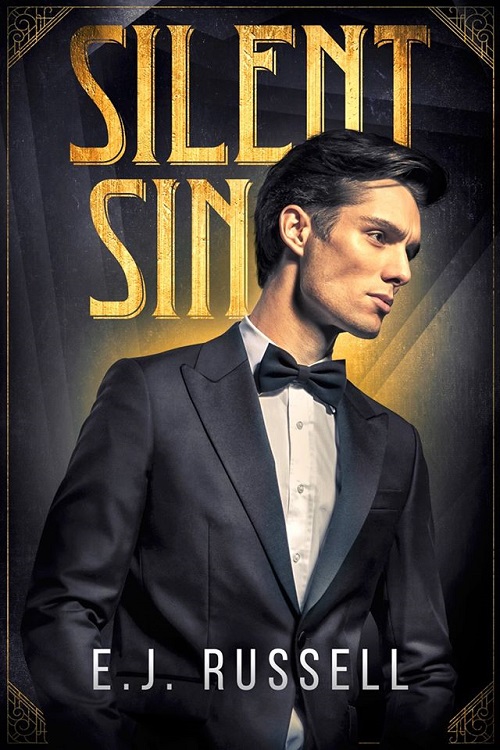 When tailor Marvin Gottschalk abandoned New York City for the brash boomtown of silent-film-era Hollywood, he never imagined he’d end up on screen as Martin Brentwood, one of the fledgling film industry’s most popular actors. Five years later a cynical Martin despairs of finding anything genuine in a town where truth is defined by studio politics and publicity. Then he meets Robbie Goodman.

Robbie fled Idaho after a run-in with the law. A chance encounter leads him to the film studio where he lands a job as a chauffeur. But one look at Martin and he’s convinced he’s likely to run afoul of those same laws—laws that brand his desires indecent, deviant… sinful.

Martin and Robbie embark on a cautious relationship, cocooned in Hollywood’s clandestine gay fraternity, careful to hide from the studio boss, a rival actor, and press on the lookout for a juicy story. But when a prominent director is murdered, Hollywood becomes the focus of a morality-based witch hunt, and the studio is willing to sacrifice even the greatest careers to avoid additional scandal. Silent Films: The Real and the Not So!
by E.J. Russell

When I was planning Silent Sin, I had two major historical events that I wanted to use as tent poles for the fictional story. (I’m not telling you what they are—but if you’re at all familiar with the scandals of early Hollywood, you’ll probably be able to guess!) And while my fictional characters work on fictional films, I used actual pictures from the era as a further latticework to hang the story on. Here are a few of the actual films that I mention. After his success in The Mark of Zorro, Douglas Fairbanks cemented his transition from light comedy to swashbuckling hero with this sweeping costume epic. The movie was distributed by United Artists, the production company that Fairbanks co-owned with Charlie Chaplin, D.W. Griffith, and Mary Pickford. The athletic stunts, elaborate costumes, and monumental sets weren’t the only things that followed Fairbanks after this film—he kept that mustache for the rest of his career.(That’s Fairbanks, as d’Artagnan, second from the right.) After several years playing bit parts and villains, Italian-born Rudolph Valentino tangoed his way to nascent sex symbol in The Four Horsemen of the Apocalypse. He probably expected this to ripen when he was cast as Alla Nazimova’s leading man in Camille. However, Nazimova was the bigger star (and, from all accounts, the bigger ego). She definitely controlled the production along with designer Natacha Rambova (who became Valentino’s second wife and thereafter controlled Valentino). It was definitely Nazimova’s picture—and not particularly well-received, especially when it came to Valentino’s abbreviated part. However, The Sheik released a month later, rocketing Valentino back to smoldering leading man status, where he remained (at least with female fans) until his untimely death at the age of 31. The Sky Pilot in question was not, in fact, somebody who flew planes—he was a preacher. The picture was directed by King Vidor and starred Colleen Moore (seen here up to their waists in snow). They filmed in the Sierras, near Truckee, California, despite complications caused by the weather (see above reference to waist-high snow). Vidor told of a blizzard that shut down production long enough for him and Moore to fall in love, although according to the accounts in Sidney D. Kirkpatrick’s A Cast of Killers (based on Vidor’s notes), they didn’t subsequently conduct an affair. However, they had a lifelong habit of leaving coded messages of devotion for each other—such as Vidor making sure each of his subsequent films had violets somewhere on the set.

I mention several other actual films in Silent Sin—The Soul of Youth, The Furnace, Gasoline Gus, to name a few. But two of the book’s pictures—The Imaginary Husband and The California Trail are purely, er, imaginary. Dottie shook her head, grabbed Robbie by the elbow, and towed him, unresisting, out of the room. She didn’t say anything to him until they were settled at a table in the corner of the commissary.

Dottie unwrapped her ham sandwich. “What did you get?”

Robbie looked down at the table in front of him. “I—I’m not sure.” He lifted one corner of the wax paper. “I think it’s a pickle.” He peered into his cup. “And tomato soup?”

She set her sandwich down. “Rob, did Antoine knock you that far off your pins?”

“I just—What—How did he—” He gave up and took a bite of his pickle, and as the sourness hit the glands at the back of his tongue, he remembered that he hated pickles. He dropped it onto its wax paper.

She sighed. “I think we need to talk about a few things.”

He nodded and then took a sip of his soup. And I hate tomato soup too. “I think that’s probably a good idea.”

Propping her elbows on the table, she leaned toward him. “The thing is, Rob, some men like men.”

“Of course they do. Everyone has friends.”

“I don’t mean that kind of like. Not as in friendship. As in love. As in sex.”

Robbie gaped at her for what might be forever. Dottie waited patiently until he’d gotten his head around the fact she was speaking about that. Nobody spoke about it. Even Frank had whispered things in bits and pieces, never giving Robbie the whole picture—never naming it—until they were hunkered down in that basement hallway, waiting for their turn in there.

But Dottie acted like she was talking about whether to order lemonade or iced tea with her sandwich.

“You do? Then that makes this easier. In Hollywood, there’s regular work—” She held out one hand, palm up. “—and there’s queer work.” She held up the other hand.

“Queer. Is that what they call them? Men who… who like men? Do they make them all stay together? Where the queer work is?”

Dottie chuckled. “They don’t make them, but there are definitely certain places where producers think it’s okay for queers to work. The costume shop is one place. Set design and decoration is another.”

Her expression darkened. “Not openly, but that doesn’t mean there aren’t queer actors. See, for all the power the studio heads have, they’re working stiffs under the skin. The artistic types, the sophisticates they call ’em, have class. So the producers depend on fellows like Antoine or George Hopkins, over at Famous Players-Lasky.”

“Okay. That makes sense, I guess.”

“But the thing is, those same producers—and all the ‘regular’ folks—don’t want queers to show up anywhere else. Directors? Stuntmen?” She pointed to a table nearby where the sausage-slinging actors were eating hot dogs. “Actors? Nope. They’ve got to be he-men. Because what they do isn’t ‘queer work.’” She jerked her thumb over her shoulder toward the corridor leading to the costume shop. “In there, it’s safe for Antoine to be who he is, because he’s where he belongs. But to be queer on the set? Behind the camera?” She shrugged. “You’ve got to have thick skin, a convincing cover story, and the courage of a whole pride of lions. You also need someone to stand by you, or you’ll get kidded by every bull-necked yahoo on the lot.” She took a huge bite of her sandwich.

“Does that happen? The… the kidding?”

She swallowed, then took a swig of her lemonade. “It can. If a director thinks an actor isn’t he-man enough for him, he’ll let a scene go on a little too long before calling ‘cut’—not long enough for any real injury, but long enough for discomfort and fear. That happened to Jack Kerrigan all the time.”

“Somebody should have stood up for him.” Robbie’s throat was tight. I didn’t stand up for Frank.

“Rob. God, your face.” She reached across the table and grabbed his hands. “It doesn’t happen all the time. Look at George. He and Bill Taylor are pretty much untouchable because they work together, so they’ve always got each other as backup. Although when Bill was in London last year, George could have had a little trouble if it weren’t for the fact that his mother has almost as such influence as he does.”

Robbie tried to speak but could only manage a croak. He took a gulp of his cold soup. “You mean they’re… they’re….”

“Together. Yes. Like that.” She let go of him, although she still watched him as if she were afraid he was about to burst into flames. She’s not wrong. “Not that they make a production out of it in public. What Hollywood tolerates here in town, in our own circles, is different from what the ladies in the temperance unions or the preachers in the revival tents can handle.”

Robbie clutched his knees, his head whirling. If someone like Mr. Taylor could do that, be that, and have his… his lover by his side….

“But Mr. Taylor is such a gentleman. He makes all those speeches to the ladies’ temperance clubs and all. Even the censorship groups listen to him.”

Dottie gave him a pitying look. “Rob, just because a man likes men more than girls, it doesn’t make him a monster.” Multi-Rainbow Award winner E.J. Russell—grace, mother of three, recovering actor—holds a BA and an MFA in theater, so naturally she’s spent the last three decades as a financial manager, database designer, and business intelligence consultant (as one does). She’s recently abandoned data wrangling, however, and spends her days wrestling words.

E.J. is married to Curmudgeonly Husband, a man who cares even less about sports than she does. Luckily, CH loves to cook, or all three of their children (Lovely Daughter and Darling Sons A and B) would have survived on nothing but Cheerios, beef jerky, and satsuma mandarins (the extent of E.J.’s culinary skill set).

E.J. lives in rural Oregon, enjoys visits from her wonderful adult children, and indulges in good books, red wine, and the occasional hyperbole.