Hi guys! We have Elaine White popping in today with her new release A Touch of Danger, we have a great excerpt and a brilliant $10 NineStar GC giveaway so check out the post and enter the giveaway! ❤️ ~Pixie~ 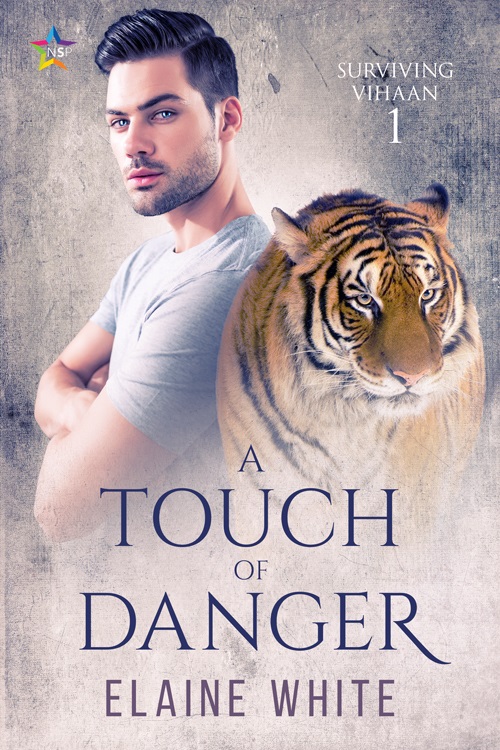 A Touch of Danger

Drew’s life sucks. Saving money to escape his homophobic family is one thing, but his only paying gig at the moment is playing his father’s “only gay in the village” plus-one to every LGBT friendly business event.

Then his brother comes up with a plan. Sheffield needs someone to go undercover for his police investigation. Drew has all the qualifications: he’s gay, he has experience with exotic animals, and he’s college-aged. And he’s easily bought.

Going undercover to solve the mystery of a college campus smuggling ring was never in his plans. Neither was hot, perfect, house captain Rylee. The inside jokes about cats, animal prints, and talk of a place called Vihaan that forbids same-sex relationships, are just the tip of the suspicious iceberg.

Little does Drew know that he’s about to expose more than an illegal smuggling operation. The truth could be more lethal than he could imagine. And, despite it all, it might be his own secret past that kills him before the truth can be unveiled.

Warning: on-page reference to a past rape, past trauma, physical and mental abuse, domestic abuse

END_OF_DOCUMENT_TOKEN_TO_BE_REPLACED

Hi guys, we have Elaine White stopping by with her new releases The School of Second Chances and The Lost and Lonely, we have some great excerpt and a fantastic giveaway, so check out the post and click that giveaway link <3 ~Pixie~

The School of Second Chances

(Evanders School for Enchanted Personage 01)
by

One Banshee. One Vampire. One Selkie. And a whole lot of trouble.

When a group of mishaps are drawn together at the most prestigious magical school in Scotland, vampires meet banshees, witches meet wolves, and things begin to happen that haven’t happened for an age. For these eight teenagers, turning sixteen has never seemed so terrifying. To learn how to hone their skills, they will discover more secrets lurking behind the shadows of their mythical lives than they ever realised existed. How they survive the school is one thing. How they survive each other will be quite another.

The Lost and Lonely

One orphan boy. One new family. One big secret.

Phil always thought his life was going to be chaotic. Orphaned as a child and having grown up in foster care, his boyfriend Logan is the only shining light in his world, along with Phil’s two foster sisters, Ella and Estelle. But when Estelle goes off to a fancy new boarding school, suddenly everything changes. His life won’t always be dark and lonely, but it will no longer be simple, either. When the Sutherland’s enter his life, Phil has to question what secrets he’s willing to keep and where the word ‘magical’ fits into his normal, human life.