and there’s a giveaway too!

2) The introduction of something new.

3) The application of better solutions to meet unarticulated needs.

Migration features 300-word speculative flash fiction stories from across the rainbow spectrum, from the minds of the writers of Queer Sci Fi.

Queer Sci Fi is giving away your choice of a $20 Amazon gift card OR a print copy of four of the other five flash fiction books in the series – Flight, Renewal, Impact, and Migration (US only unless you are willing to pay the shipping outside the US) with this tour. Enter via Rafflecopter:

“The fields are overgrown, have been for years with all the Bios underground. The wind kisses the grass in serpentine patterns long forgotten, patterns the Bios couldn’t imagine anymore. My mechanical hand stores the seed envelope in the mechanical pocket in my androgynous torso. In these suits, there is no gender. Gender is, always has been, in the mind. And I am finally, unequivocally, female.” —Seed, by Val Muller

“The girl kissed her, hard. Then backed away, grinning, teasing, drawing her to the end of the hallway and a flight of stairs leading downward. She took two steps and gazed back up at Lilian, one hand outstretched. Her brilliant red lipstick wasn’t even smudged. Her skin glowed in the harsh white torchlight.” —The Thing With the Bats, by Mary Francis

“Interspecies sex is outlawed on the Freespec Interplanetary Space Station. Politicians call it a safety measure. But I’ve been in the Medical Corps for half my lifecycle, and I call it criminally negligent prudery. Leaders would rather let innocents die needlessly—punctured by sperm darts and dissolved in sacks of voltaic pleasure mucus—than give them the knowledge to express their feelings safely.” — Are My Underwater Sperm Darts Normal?, Brenna Harvey

“The bell’s brassy gong echoes through the flat; the walls blush crimson. See, see! He’s at my door. The live feed shows him sniff his armpit; cup his breath. He wants to impress, but I’m impressed already. His lips softly part; he brushes them with stubby fingers, as he waits. Ugly fingers. Ugly hands. Scrawny neck. Milky eyes. But those lips, see, they’re perfect, just perfect. Plump n’ pale, a slither of my future.” —Just perfect, by Redfern Jon Barrett

“Lekke looked down over the valley, First People’s home for as long as any tales or dreams could tell. Now only Spirit Dreamer Manoot, neither he nor she but both, and Lekke, elder healer, were left. Lifetimes of Long-legs’ raids had driven First People to their deaths—or, some few, to the Way. If there truly was a Way.” —Going Back,” by Sacchi Green

“Savinna limped into her lover’s workshop, her hip still sore from tangling with the marabbecca which had knocked her into its well before she managed to kill it. Such was the life of a monster hunter. Not at all surprised to see Larissa hunched over her bench, hard at work tinkering with something, Savinna ghosted her hand over Larissa’s back.” —Those Who Hunt Monsters, by Jana Denardo

“The baby cried as Freya lowered the bartering bucket into the wishing well. Many had come to the tree-shrouded clearing to make exchanges—a bushel of azure apples for a sword, a woven blanket for a day of rain. The well had been the final creation of a thousand-year-old inventor. But dead wizards often don’t anticipate how their gifts birth consequences.” —The Bartering Bucket, by Diane Callahan

“You will never fit in.”

Tibullo flinched at his father-in-law’s words. Swallowing carefully, he replied, “I don’t care.”

The aged halfhart snorted, pawing the ground in frustration. “A Cerven and a centaur! It just doesn’t happen.”

“It does now,” he shrugged.

“You will trample him in your sleep, you brute!”

Tibullo rolled his eyes. “I am hardly a hand taller than your son, Pricket.”

“You will poison him with your damned Cold Iron horseshoes,” the halfhart added with a sneer.

The centaur raised a hoof in defiance. “The first day I met Luzio, I ripped them off. I only needed them to travel over the mountains to get here. I don’t need them anymore.”

Pricket swished his white tail in aggravation. “You will never give him fawns. His mother and I will never have grandchildren.”

“The forest is full of orphans. Luzio and I want to adopt,” Tibullo countered, waiting a moment before adding, “Whether you and Willow will accept them as grandchildren is up to you.”

“Do you think he will be happy with you?” Pricket asked quietly.

Tibullo’s breath hitched at the sincerity of the question. “He is my soulmate. I will do whatever it takes to make sure he is happy.”

“What about his family? His social status?”

“Whatever it takes,” Tibullo repeated.

Pricket shook his head. “You will never fit in, looking like that. So wear this,” the halfhart added, handing Tibullo a crown of antlers.

Tibullo gasped in surprise. His fingers shook as he fumbled with the knots and laces.

“Here,” Pricket grumbled. Tibullo knelt down so that his father-in-law could help him secure the gift to his temples.

“Everyone in our clan has antlers,” Pricket explained. “Now you do, too.”

120 authors contributed stories for this volume: 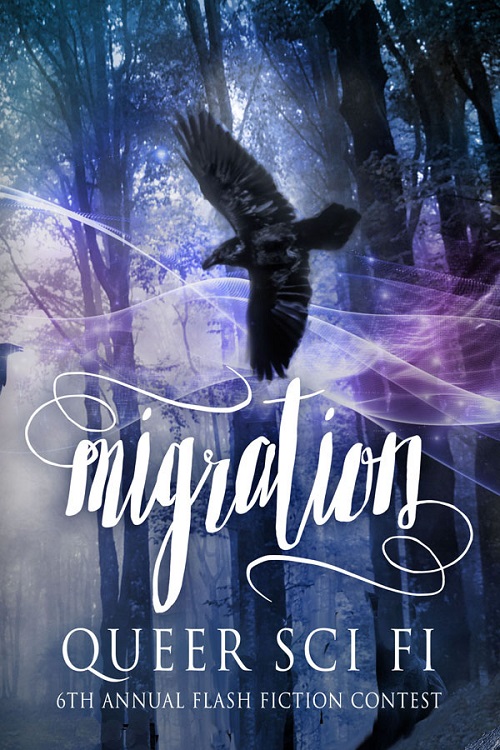