Ethan Roam has faced a lot of nightmarish challenges—finding out he’s a sandman, falling in love with the man who once hunted him, and thwarting attacks from The Order of Azoth, a secret occult organization set on using his bloodline to conquer the universe by controlling immortality. And the battle is far from over.

To defeat The Order and its leader, Phantom, Ethan must first find the original Sandman and then bring the fight to the Dream World. Saving the universe might be too tall an order for one dream creature, but with the help of his friends and some Celestial beings with questionable motives, Ethan just might be able to weave a trap of surreal proportions.

“Maybe it’s broken.” Ethan Roam, the sandman, shook the orb as though giving the device the magic-eight-ball treatment would bring it pulsing back to life.

“It had better not be. Technical support doesn’t exist for magical artifacts,” Mercury said.

Unsuccessful at reviving the device, Ethan set the orb down on the flattened surface of a nearby stalagmite. “I’m surprised to say it, but I really wish Chris was here. If anyone could fix this, it would probably be him.”

“The Sandman Orb doesn’t need to be fixed. You’re just a bad driver,” Mercury, the former vampire, Dacey, who was now transformed into a celestial entity, chided. Guarded, he turned a one-eighty to view what little he could make out about their dark cavernous surroundings. This wasn’t the first alien planet Ethan had transported them to. But without the Sandman Orb working to give them a proper idea of where they physically were, it was becoming the most foreboding.

“Well, it would help if I had the driver’s manual,” Ethan defended, referring to the Codex, which had been left behind in Grady Hunter’s study during the battle with the Hunters of Azoth, forcing them all to escape to the Dream World. “My driving doesn’t explain why the orb just stopped working all together.”

“Of course, it does. You took a wrong turn into an uncharted dimension. You’re off the grid, darling.”

“Sorry I didn’t pull over to ask for directions,” Ethan snipped.

Before he could add anything else to his sarcastic rebuttal, Mercury grabbed his arm in a protective manner and whispered, “Hide the orb. We’re not alone.”

Ethan scooped the archaic device up and stowed the orb away inside his jacket’s inner lining, thankful Grady had bestowed the hand-me-down to him. His boyfriend’s wardrobe had all sorts of custom pockets and restraints for portable weaponry, which Ethan found to be more and more a necessity.

A cluster of glowing eyes appeared in the darkness, followed by the sound of grunts. Ethan released a pulse of glowing blue dream energy from his palm to light up the space. The alien animal let out an annoyed squawk. Now that Ethan could get a good peek at the creature, he wished he hadn’t.

The alien matched the murky gray sediment of the walls around them and appeared just as bulky. Its long body reminded Ethan of a salamander, only several feet longer and the size of a large crocodile. Once its gaggle of eyes adjusted to the light, the creature used six legs to propel itself rapidly toward them.

“Ball play is over. Back to basics,” Mercury instructed. Mercury had no reason to worry for his own life, seeing as he currently held the title of Death. Instead, he’d be more interested in protecting Ethan’s.

Picking up on his meaning, Ethan opened a portal back to the Dream World. In the blink of an eye, he and Mercury left behind a confused, angry, and hungry alien life-form.

Luckily, Mercury noted, Ethan has mastered the art of landing on his feet and not on his face when traveling between worlds.

“Not nearly fast enough,” Ethan reminded him, producing the orb once again. At least now they knew for certain the device wasn’t broken since the orb glowed back to working order with the atmosphere of the Dream World to energize it. “And this thing is basically useless without the Codex.”

“There’s more than one way to navigate foreign waters. Might I refer you to the Age of Exploration?” Mercury patted him on the shoulder in encouragement.

“No need to ask if you had any luck. I see Vincent still isn’t with you.”

They turned to see Marcus von Rottal, the vampire, standing nearby, his hands casually resting in his pockets.

Mercury had reason to be wary of Marcus’s extreme interest. They were all in limbo until they could find Vincent Roam, Ethan’s father—the original Sandman. Unbeknownst to the others, Marcus was the reason for Vincent’s disappearance. He’d pushed Vincent into a portal out of unfounded jealousy. Mercury had guarded their secret in order to protect Marcus. However, the truth seemed destined to come out. Especially if they were successful in finding Vincent alive. Mercury imagined Marcus would want to put all his efforts into doing whatever he could to prevent that from happening.

As long as Mercury had known him, Marcus had put his own interests above everyone else’s. Nothing could stop him or deter him once he set his mind on something. Mercury would have to play his hand very close to keep Marcus from interfering or suspecting he mistrusted his intentions. And as unrealistic as his desire was, a part of him also hoped the others never would know the truth. Regardless of everything which had transpired to drive them apart in the last century, and as much as he’d shed the coil of his past life as Dacey, Mercury still felt protective over him. Or at least responsible for him.

“Marcus, darling! I’m so glad you’re here,” he lied. “Would you be a doll and fetch Grady and perhaps even the portly fellow? What’s his name again?”

Mercury snapped his fingers in confirmation. “Yes! I have an ever-growing list of questions needing answers from those bookish occultist blokes.”

“Hunter wandered into the dream forest,” Marcus informed them. He often referred to Grady by his surname to slight him. “I was quite hoping he’d lose himself in there, but I suppose I’ll go fetch him out if I must. Must I?”

Marcus pursed his lips in response before making his way into the fluorescent-hued woods surrounding them.

Knowing full well Ethan would question the need to interrogate the other men, Mercury went ahead and answered. “Who has read the Mechanics of Sleep Travel more times than anyone else, and even better, who helped write the damned thing?” 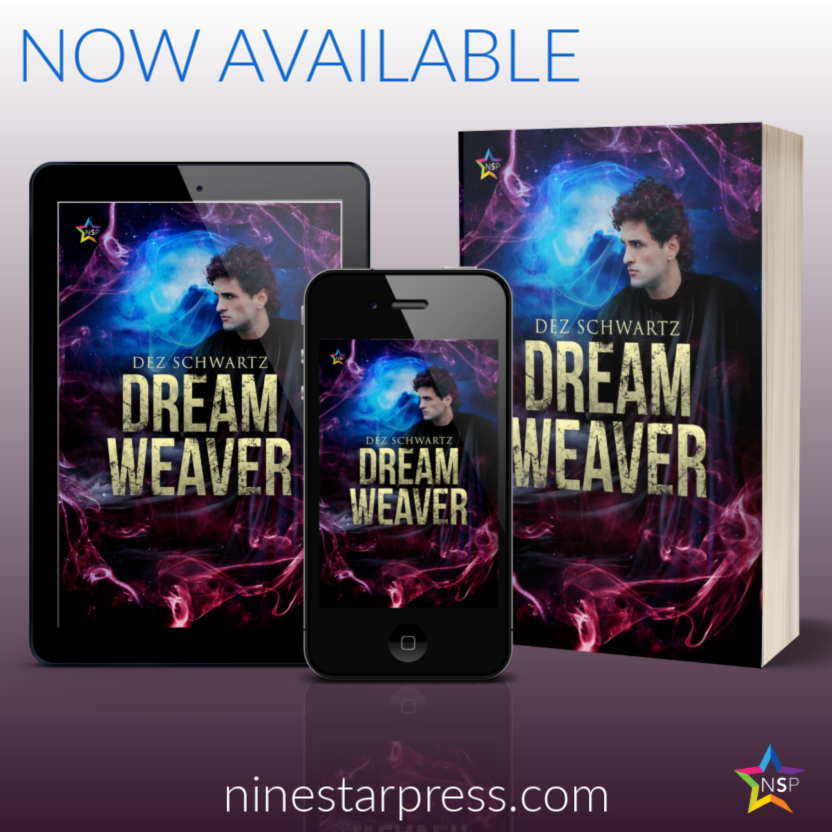 Dez Schwartz is a LGBTQ, Dreampunk, & Gothic Romance author and artist based in San Angelo, Texas. She holds a BFA in Studio Art and worked as a graphic artist, and a Director’s Assistant at a fine arts museum, before transitioning to writing full-time.

Her longtime love of Victorian spiritualism, gay literary fiction, and romantic comedies inspired her to begin writing all of the stories she wished existed.

When she’s not passionately crafting tales, she can be found drawing, researching, or traveling with loved ones.

Hi peeps! We have Dez Schwartz popping in today with her new release Hunter, we have a great excerpt and a brilliant $10 NineStar GC giveaway so check out the post and enter the giveaway! ❤ ~Pixie~ 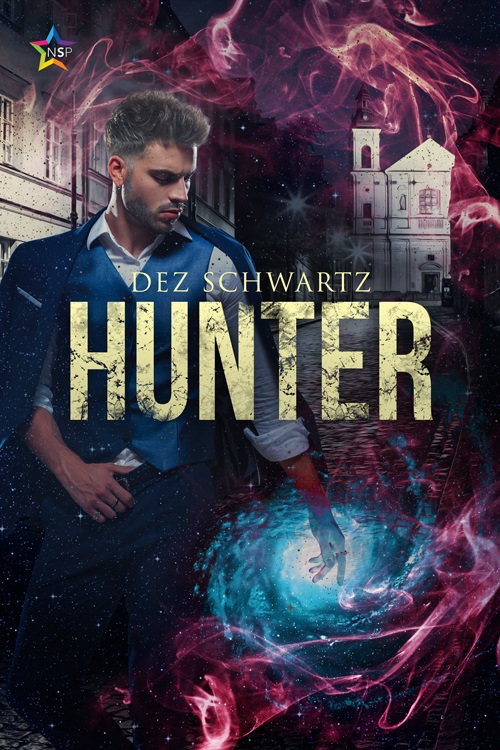 Dr. Grady Hunter has a vampire infestation on his hands in the town of Shady Pines, but he’s been deserted by those best suited to help. After enlisting Chris Reed, a techno-mage, they find the vampires might only be the tip of a deadly iceberg.

Returning home from his dream travels, Ethan Roam is eager to experiment with his newly discovered powers. But Ethan isn’t the only familiar arrival in Grady’s life. As more reminders of his dark past crop up, Grady and Ethan are swept up in a mystery of cosmic proportions.

Grady must fight to keep an ever-evolving Ethan on his side while being challenged by the ghosts of his past.