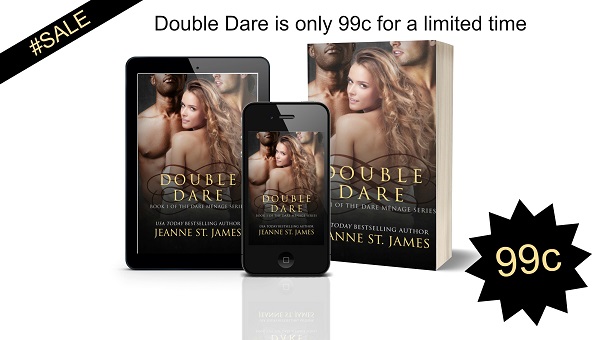 Hi guys! We have Jeanne St. James popping in today with her release Double Dare which is on sale for just 99c for a limited time, we have a great excerpt so check out the post and enjoy! ❤ ~Pixie~ 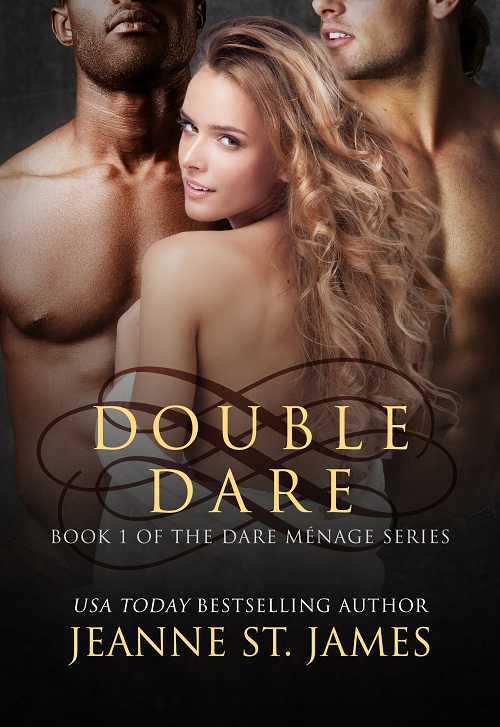 What could be better than waking up next to a hot guy? Waking up sandwiched between two of them.

Quinn Preston, a financial analyst, is not happy when her friends dare her to pick up a handsome stranger at a wedding reception. What better reason to give up men when her previous long-term relationship had not only been lackluster in the bedroom but he had cheated?

Logan Reed, a successful business owner, can’t believe that he’s attracted to the woman in the ugly, Pepto-Bismol pink bridesmaid dress. And to boot, she’s more than tipsy. After turning down her invitation for a one-night stand, he finds her in the parking lot too impaired to drive. He rescues her and takes her home. His home.

The next morning Quinn’s conservative life turns on its ear when Logan introduces her to pleasures she never even considered before. And to make things more complicated, Logan already has a lover.

Tyson White, ex-pro football player, is completely in love with Logan. He has mixed emotions when Logan brings home Quinn. But the dares keep coming…

Note: This book in the series can be read as stand-alone. It includes an HEA ending. It is intended for audiences over 18 years of age since it includes MMF scenes between all three characters.