Hi guys! We have debut author J.L. Brown stopping by today with her debut release The Burning of Arbor, we have a great excerpt and a brilliant $10 NineStar GC giveaway so check out the post and enter the giveaway!  ❤ ~Pixie~ 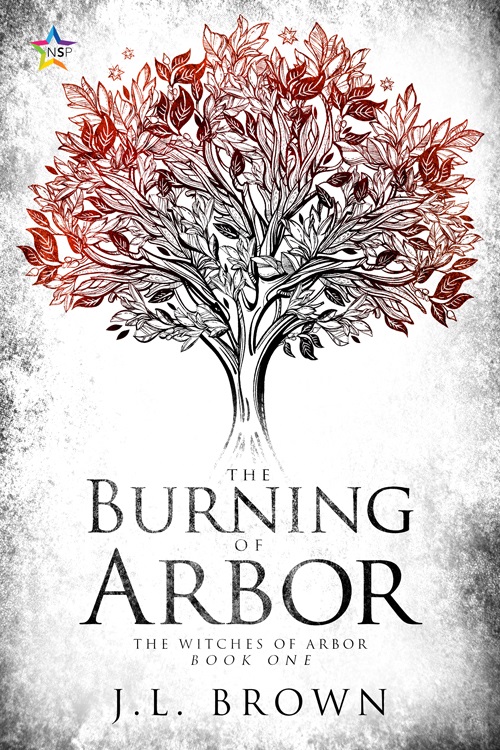 The Burning of Arbor

Evangeline Clarion is a fiery artist and elemental witch. She dreams of opening a gallery in her small town of Arbor, but Eva’s embrace of her own power and sexuality offends the pious sensibilities of the devout Arbor citizenry.

A gaggle Eva referred to as “Arbor’s Most Moral” sets out on a witch hunt to ruin her and drive her out of town. They attack her in the pews, in the press, and in person. But instead of weakening her, the relentless barrage fuels the fire within her.

As her burgeoning magic is set aflame within Eva, so is her desire. While her neighbors plot against her, Eva falls in love—first with the mesmerizing heir of the Morgan Manor estate, and later with a beautiful Wiccan. Eva relies on both of them, along with a cast of magical cohorts, to help her combat the witch hunt. But when magical retribution goes too far, Arbor’s salvation rests in the hands of a witch.

True magic has thrived in the world long before man documented such things. A spark of magic is present in every wish, at every birth and deathbed. It manifests itself in first kisses and first loves. It animates and inspires us. It abounds in the change of seasons, in the most remote forests and congested steel cities. Magic dwells within the rock of the mountains, and inhabits the waters of every stream and river and ocean. It exists both in the wondrous and mundane of every day. It is neither good nor evil. Magic bears no moral compass. The intention of the practitioner who wields it determines its use, for good or ill. And no one can escape magic’s most essential rule: what one projects into the universe will return threefold.

The Wiccan Rede states, “An ye harm none, do what ye will.”

I chose a different motto to live by. “Harm none, but take no shit.”

I was never good at following the rules, and I learned my lessons the hard way.

I refused to cower. I clenched my fists to keep from fidgeting and sighed at the twinge of pain where my nails left half-moon imprints in my palms.

“Isn’t the bank usually closed on your Sabbath?” I asked, maintaining eye contact with the crotchety loan officer across the desk.

The woman could catapult my dreams had she the inclination, and I could tell she reveled in this power over me. My emerald stare seemed to unnerve her for a slim second, but she set her spine rigid. Her suspicious gaze rolled over me, and she twisted her wrinkled lips into a scowl.

“I thought it best not to delay the inevitable, Ms. Clarion. I’ll be brief. You know as well as I that this little scheme will never get off the ground. Arbor is a quiet, wholesome community, not well suited for your kind of… business venture.” She scrunched up her nose as if the notion itself smelled foul. “However, I am nothing if not by-the-book. I reviewed your application, and after considering every factor, I must decline your request. Your excessive student loans, exorbitant debt-to-income ratio, and lack-luster credit history disqualify you for a mortgage loan.”

“What about my savings?” I asked. This isn’t happening. This can’t be happening. Panic spiked my veins, and sweat beaded along my forehead.

“Your… savings?” she snickered. “Woefully inadequate.”

“It’s twenty thousand dollars!” I said, shooting to my feet.

“I am sorry, Ms. Clarion. There is nothing I can do for you.” But she wasn’t sorry. Her smug expression made that clear. She enjoyed withholding the means of my success.

Of course this is happening. The decision shouldn’t have shocked me, but it did, and it hurt. “So, that’s it?”

I should’ve known better than to think anyone from Arbor would allow someone like me so public a platform. I might sully the well-crafted image of the town they so carefully portray to the world.

For as long as I could remember, I’d dreamed of owning a place to sell my artwork and designs, somewhere to perform. It would be a gathering spot for the creative, the different, the weird. I’d been saving for years.

This woman thinks she can crush my dreams in a single five-minute meeting? No fucking way. I’ll figure something out.

The glare of the noonday sun blinded me as I emerged from the Arbor Savings & Loan. Squinting, I sat on the bank’s steps to fish my sunglasses out of my bag. Once my vision adjusted, I took in the view along Parson Street, downtown Arbor’s main drag. It bustled with a Sunday afternoon’s lazy vigor. The Rockwellian cafés and shops teemed with the post–church-service crowd. Clusters of believers mingled and gossiped and bragged, decked out in their finest prim and proper attire. Arrogance and privilege marked their manners. Without a droplet of sweat on a single brow, the parishioners seemed somehow immune to the sun’s crushing heat. The air hung stagnant and oppressive in the conservative hamlet, nestled as it was into the base of Gothics Peak.

A piercing “Keeee-aaar” sounded from high above. I looked into the crystalline summer sky at a red-tailed hawk swooping in circles, his wings spread wide. I’d know that bird anywhere. Rocky had been my faithful familiar for almost nine years, since I’d entered high school. Besides his no-nonsense sagacity, Rocky granted me the ability to fly—when he was in close enough proximity for me to feed off his magic. He was the second familiar with whom I’d been blessed. Shasta came to me when I was eight, right after my mother died. Shasta never ventured into town, though. An abnormally large black bear walking amongst the masses wouldn’t go over well.

“Your meeting didn’t go as planned, I judge.” Rocky’s sharp, stately voice echoed within my mind.

“You judge correctly,” I replied in the same fashion.

“That backwards thinking pencil-pusher never had any intention of aiding you, and you know it. I’ll never understand why you bother with the fools in this town. Your talents would shine down in the city. That’s where you need to be.”

“You know I can’t leave Maggie.”

“No. You don’t want to leave your goddess-mother. Big difference.”

“I’m not going to argue semantics. I just want to get home and forget this entire morning.”

“Hate to break the news, but unless you plan on riding the wind with me, you face a delay.”

“You don’t have a choice. Have you seen who’s planted in your path?”

Halfway down Parson Street, between me and where I’d parked my truck, was a gaggle I referred to as Arbor’s Most Moral. Mayor Doreen Crandall sat at a bistro table outside of Ebenezer’s Café. Beside her lounged Reverend Cudlow—pastor of the First Ecclesiastical Church of Arbor, the town’s only house of worship—and his haughty wife Gladys.

“Hurry by them, Evangeline, and do not dawdle. Shasta’s got her fur in a bunch.”

Without waiting for a reply, he caught the wind and headed back to our cottage. I’ve always been a lover of words – reading them, writing them, singing them. And I’m known as a talker – especially about politics, usually at an abnormally loud volume. I was the kid who always got into trouble for staying up too late to read, and that habit has followed me into adulthood. Edgar Allen Poe, Anne Rice, J.K. Rowling, and Jane Austen are my greatest literary influences. Family is important to me, and I cherish the large Italian Catholic family that raised me. I’ve been married over 18 years. I’m a momma of two incredible boys. I have a small home in New Jersey, and enjoy listening to my husband’s music, camping, kayaking, and getting lost in the woods. I’m a coffee and wine drinker, and I believe chocolate can cure most ills. 2 thoughts on “The Burning of Arbor by J.L. Brown Release Blast, Excerpt & Giveaway!”