Hi peeps! We have Jeanne Marcella popping in today with her new release The Demon Lord of California, we have a brilliant guest post from Jeanne, a great excerpt and a fantastic giveaway, so check out the post and enter the giveaway! ❤ ~Pixie~ 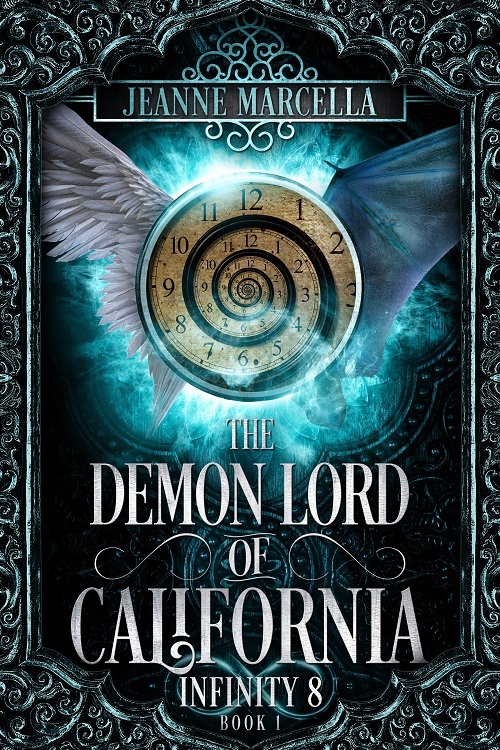 The Demon Lord Of California

Calico Winghorse has no choice but to flee to the plane of existence called Earth. His great grandfather, suffering from a terrible curse, strips him of his psychic abilities and nearly murders him.

As a mixed-blood phoenix concealing himself in human form, Calico first settles in England, then in the San Francisco Bay Area. In order to make a living, he opens a small bakery and quietly licks his wounds.

But just how Calico escaped his childhood home—via interdimensional portal—is the very reason why he’s drawn the unwanted attention of Infinity Corporation.

Representing this angelic-run company is Agustín Chávez de la Cruz, the Demon Lord of California. Even though Agustín is IC’s heir, he finds himself demoted from his daily duties for a new assignment: take absolute control of Calico’s portal.

Calico and Agustín’s first brief encounter ignites sparks of attraction. Their second is highly explosive, bogging down initial communication with innocent mistruths and a healthy dose of fear.

As Agustín struggles to restore trust, Harper, the demanding head of IC interferes, further complicating matters. With negotiations slowed, Calico and Agustín realize they both wish to establish more than just a business deal.

However, until the extensive and brutal psychic injuries Calico received from his great grandfather are healed, the portal remains vulnerable to the darker forces that want it at any cost. Agustín will have to push both his angelic heritage, and his psychic powers to the very limits to mend someone who bears more than celestial blood, but who is also the god of space and time.

And the clock’s ticking.

Agustín Chávez de la Cruz (Gus) remains somewhat of a mystery for me. He’s a character I still feel distanced from. That’s quite a statement, given he’s the title, and starring in the first book of the Infinity 8 series! I also have big plans for him in the last book of part one of the series, and the title will reflect that. (You heard it here first!)

I find that distance a bit unusual, as most of my characters hover around me like some strange mutation of a helicopter parent—even if they don’t talk to me much, like Rupart Bright Terra from my Seasons of the Phoenix dark fantasy saga, as an example. (Rupart’s a whole new bag of chaos for a future blog post.) Out of all my characters combined, Gus is among the small handful who are the most sane and level headed. He’s a workaholic, having to grow up and take responsibility fairly quick. Other than that, I still feel at a loss in trying to talk about him.

However, Gus is someone who introduced himself as a demon. Many of my characters go through minor transformations—or as I say, they string me along. I’m not sure if it’s all just a game to them (some do toy with me!) or if they just have to check me out before they feel comfortable about saying hello. I recall Gus’s debut scene where he was not the Demon Lord of California, but I knew he was someone important.

It took Gus’s other half, Calico, to inform me of Gus’s noble lineage, and that Gus was half angel. In fact, Calico blubbered on about Gus before Gus even stepped into the picture. Sometimes, it takes one character to coax another to arrive on screen for their debut.

That’s something I’m perfectly fine with. But when they decide to pop up and yell “Surprise!” halfway through a second or third draft, that’s when harried revisions begin and I glare at them for their late arrival. Then they just grin and wave at me for my trouble and tell me to get on with it. Such brats but I love them all.

Time and tide may not wait for mere men, but the adage dragged for demons. Agustín Chávez de la Cruz stepped off the curb, narrowly missing a fresh pile of horse dung. He was ahead of the crowd surging from the music hall, and he wanted to keep it that way. The matinee had been entertaining enough, although reality once more set in when the curtain fell.

Pressing a handkerchief to his nose, he cursed the stench of horse, oil, and gas bleeding through the expensive linen fibers. Dodging equine taxis and motorcars, he braced himself against the repetitive clang of trolley bells. A headache followed.

He usually tolerated the vivacious pace San Francisco offered, with its views of the sea and its steep hills. Lately, however, the noise and hustle grated on his temper.

Testing his acclimation from stuffy theater to outside air, he slowly lowered the handkerchief and put it away. Breathing shallowly, he checked his new wristwatch, a gift from his son away at university. It was 3 p.m. He sighed. There were still three more hours of merriment before Etney and his staff allowed his return.

Agustín wasn’t sure where he was going. He needed to keep moving—and hope the city’s stink wasn’t a permanent cling. He imagined getting home only to have his valet accuse him of wallowing in the gutters as revenge for nagging him to get out more.

With a matinee show and a questionable lunch at an even more questionable eatery, which he’d attended to his credit, his nerves were done. He checked his wristwatch again—one minute after three. Oh, gods and demons, would this day never end?

“My pardon, Lord California. Please, I must have a word with you.”

California. His title spoken aloud knocked him from his mired brooding. Whoever addressed him was of paranormal origin and dared to pull on his coat sleeve.

Agustín turned, tactfully withdrawing his arm and holding himself rigid. He noted his wallet’s weight still tucked into his inner vest pocket. “Yes, I am California.”

In the bright light of the day, he could see only the obscured shape of the stranger’s face through the heavily veiled hat. Layers of white translucent scarves billowed from the bustle of traffic, and the man’s cream-colored suit with matching shoes had not picked up a trace of grime.

Paranormal indeed. Perhaps a spell of some sort kept him tidy.

This man was about six feet; Agustín took the advantage of being at least five inches taller and loomed a little as he stared. Many were intimidated when they first encountered the mismatched color of his eyes. Their blue and honey-amber shades glowed like a halo against his dark brown skin and black hair. His appearance alarmed even the most hardened of demons.

But the man’s short, lazy laugh was warm, conveying no alarm whatsoever.

“Good afternoon.” The stranger bowed slightly. “My name is Mr. Triptych. I’m IC’s new liaison as well as the new regional manager for this jurisdiction. They said you’d be around here today.”

They said? New liaison?! New regional manager for this jurisdiction?! Agustín’s jaw tightened and his eyes narrowed into lines thinner than his valet’s sewing threads. Had Etney been going behind his back? Reporting to HQ with her ridiculous concerns that he was overworking himself? Regardless, he would not cause a scene in the street.

“I’ve just come from ICHQ,” Triptych said. “Mr. Harper has assigned you a most important task.”

Agustín’s growing rage slipped at Harper’s name. The head of Infinity Corporation had always provided his duties directly. In person. Face to face. Something unpleasant was churning, and his stomach felt compelled to follow. Jeanne Marcella was born and raised in the San Francisco Bay Area. Granted unlimited access to books at a very early age via the library, she quickly acquired a fondness for creating her own stories through word and drawing.

She writes queer dark fantasy not for the faint of heart, and fun (but sometimes gritty) urban fantasy soaps, all with romantic elements. Win an Ebook of The Demon Lord Of California!