Hiya guys! We have Jenn Burke popping in today with her new release The Dragon CEO’s Assastant, we have a great excerpt and a fantastic giveaway, so guys check out the post and enter the giveaway! ❤️ ~Pixie~ 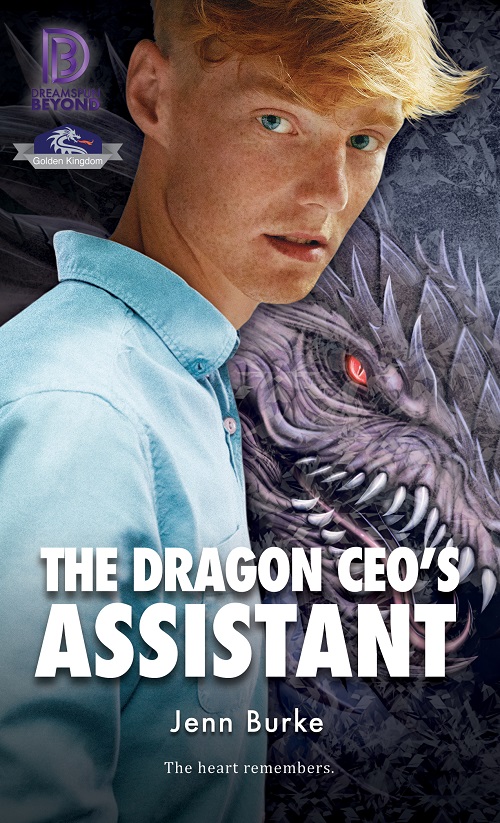 When Aidan Bishop staggers out of the woods, naked and suffering from amnesia, he needs to relearn who he is and where he fits in the world.

His boss, nearly five-hundred-year-old dragon Nassim, head of a successful tech company, hurries to claim his wayward assistant and guide him back into the life he disappeared from. As they get to know each other again, Aidan wonders if their relationship went deeper than employer and employee. But Nassim isn’t telling, and Aidan has a secret of his own… even if he doesn’t know it yet.

A CLANG of a pan, chased by a muffled curse, nudged Aidan to full wakefulness the next morning. He lay in bed a moment, half-remembered thoughts—dreams? memories?—racing into nothingness as he looked around the room. Sunlight crept past the edges of the blinds, but it was tough to say what time it was.

There had been dinner at some point. Aidan woke up enough to join Nassim in the kitchen and slurp soup out of a bowl, but he couldn’t say what sort of soup it was or even if he wore a shirt to the table.

On the plus side, he felt much better after hours of solid sleep, uninterrupted by nurses and tests.

He stumbled across the hall to the bathroom, relieved himself, and considered his still-unfamiliar face in the mirror as he brushed his teeth. Fully rested, he felt more capable of facing the world and all of its uncertainties. Really, all he could do was what Dr. Singh had advised—live his life. Or, well, discover his life was the first step, he supposed. He knew his name, and for the moment, he wasn’t alone.

It was a start.

He went back into the guest room—his room—and spotted a notebook on the desk and pens in a cup. His fingers itched to pick one up, so he gave in to the urge, flipped the notebook open, and wrote Aidan Bishop at the top of the page. He could make a list of everything he discovered about himself, and maybe it would help on the days where the world didn’t seem so conquerable.

The first thing he wrote?

It made him grin because, yes, itemizing his thoughts felt right.

Living his life didn’t seem quite so insurmountable. It wasn’t going to be easy—oh, that was something else to write down.

Moving forward was going to be a challenge, but he could do it.

He tapped the pen against the paper for another couple of seconds, but another crash from the kitchen prompted him to abandon his list. It would be there later.

He wandered down the hall, stretching, only to freeze midextension at the sight of Nassim on his knees, his ass in the air as he searched a bottom cupboard for something. The image of round, muscular buttocks, firm handfuls under thin heather-gray sweatpants, with no underwear lines to mar the fabric, made his mouth go dry. And his groin tingle.

“What?” Nassim jerked up and smacked his head into the top of the cupboard. Curses in a language Aidan didn’t know spewed from his lips. It didn’t make him any less hot.

Aidan raced back down the hall and into his bedroom and skidded to a stop in front of the desk. Breathing hard, he wrote another line in his notebook. Win a amazing prize package for the “The Dragon CEO’s Assistant” release!