Hi guys! We have O.E. Tearmann visiting today with the tour for their release The Hands We’re Given, we have a fantastic guest post from O.E., a great excerpt and a brilliant giveaway, so check out the post and enter the giveaway! ❤ ~Pixie~ p.s. keep an eye out for my review coming soon! 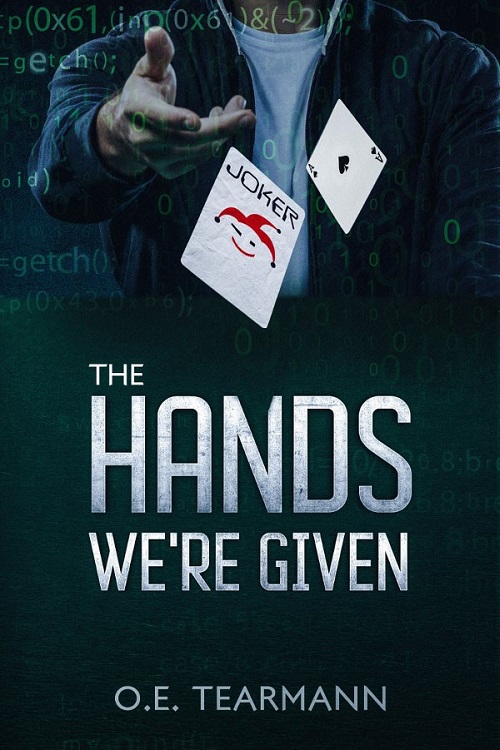 The Hands We’re Given

These are the mission files of The Wildcards. Officially Democratic State Force Base 1407, the Wildcards are serving in a new American Revolution. In 2155, corporations run the City Grids for a profit and own their workers body and soul. The Constitution has been relegated to a quaint document. Freedom is just a word in the news vids. But off the Grid and in the shadows, there are people fighting for a change.

Will you stand up? If you’re even remotely aware of what’s happening in the literary world right now, you’ve probably seen a big push for more diverse stories. Books with GLBTQ characters, characters of color, disabled characters, neurodivergent characters, etc. And, honestly, this is super exciting for me.

I first started writing the Aces High, Jokers Wild series before #WeNeedDiverseBooks and #OwnVoices hit the web. Ensuring that the cast reflected the diverse reality of our world has been a priority of mine from the start. As a marginalized author in my own right, I know how life-changing it can be to see yourself represented on the page. I also know how important it is to see characters like yourself going on adventures and changing the world–not just moping about their gender or worrying about coming out.

Of course, writing characters that don’t share your world experiences can be intimidating, especially when you want to make sure you get it right. So I wanted to share a few of my own personal tips for writing diverse characters. I’m not necessarily an authority on the subject, so please feel free to leave your own suggestions in the comments or email them to me. The biggest piece of advice I can make, honestly, is to be open to mistakes and changes. Even throughout the process of writing the Aces High series, I and my co-writer (surprise; O.E. Tearmann is actually two people) educated each other on various aspects of our own diverse backgrounds. We had moments of calling each other out for incorrect or irresponsible characterization and representation, and I think our product is stronger for it. And, of course, we had some fantastic sensitivity and beta readers to help along the way.

The world needs more diverse books, especially as certain groups attempt to tear us apart from each other. That’s just a fact. Don’t let fear get in the way of contributing to that. Write characters from all backgrounds, sexualities, gender identities, abilities, and more–and please let me know when you do so I can add your book to my shelf.

If you’d like to get this kind of thing on your virtual and physical shelf, come hang out at @wildcards1407 on Facebook or follow me on Amazon at https://www.amazon.com/O.E.-Tearmann/e/B07J62VX9W The dark shapes of three drones flitted over the junkyard, blotting out the stars. Aidan desperately turned the keys, slamming his foot on the accelerator. The truck’s engine finally revved. Kevin flung open the passenger side door and leapt inside. “Go, go, go!”

Aidan slammed it into reverse and hit the gas. They jumped backward. Once the truck was far enough away from the fence, he changed gears and wrenched the wheel around. They bumped and rattled into the night as fast as Aidan dared without the headlights on. The heat of the engine would make them easy to follow for the drones’ thermal cameras, but the short-range guard drones couldn’t go too far from their base of operation before their programming called them back. Aidan just hoped they could outrun them.

He gripped the steering wheel so hard it hurt. He could feel the suit tightening down against his skin. His heart pounded in his chest. Kevin’s breathing was ragged beside him. Another burst of bullets sprayed the ground right in front of them. Aidan yelped and yanked the wheel to avoid getting hit. The truck jittered to the side. Aidan slammed on the gas. The desert night sped past in a blur of blue and red under the starlight. Slowly, the whir of rotors faded into the distance. Aidan’s grip on the steering wheel began to relax. Kevin pulled his tab out of the bag and set it on the dashboard, watching as the screen flipped through the security channels they’d hacked into, keeping track of the location of dozens of drones.

Finally, Aidan pulled up under an overhang of red rock and cut the engine. The wide-range security drones were due to make their fly-over soon. Better to stop for a while and recover, get back on the road when it was safer.

They sat in silence for a long time, listening for rotors over the quiet buzz of the night insects. Aidan rested his arms on the steering wheel and propped his chin on his wrist, watching the star-studded sky.

“You all right?” Kevin breathed. At some point during the drive, he had deactivated his slick suit.

Aidan sighed and leaned back so he could manually flip his face screen up.”Yeah. Think so. Banged my knee pretty bad. Your shoulder?”

So. They were alive. They’d gotten out with most of what they’d gone in for.

At the expense of a bad bruise across Kevin’s cheek, that or worse to his shoulder, and an action that could have caused so much more.

Slowly, some of his anger seeped back. He took a breath. “You scared the hell out of me back there and acted like a complete gamma, Kev. Don’t do that again.”

Kevin ducked his head in a slow nod. “I’m sorry, Aidan. I— When I saw you like that, I guess I panicked.”

Aidan sighed. Kevin was normally so level-headed. He’d been utterly cool on-Grid, when Aidan had been scared shitless.

So why had he acted like this out here?

On the tab screen, the red dot of a drone approached their location. They waited in breathless silence as the long-range drone passed, not even the sound of whirring to announce its presence. The red dot moved out of range.

Aidan breathed out. Kevin looked up with a smile. So close. They were so close.

“That’s the last of them. A very fine night’s work if I do say so.”

Aidan tried to smile, but it faltered. “I didn’t get the holo board. That was the part we needed most.”

Kevin smirked as he pulled the bag up from the floorboard and into his lap. He rifled quickly through the materials they had managed to grab, yanked, and pulled out the board with a wink.

“What? How…?” Aidan breathed, feeling the wave of defeat that had been threatening lift.

“Fell down the pile when you did,” Kevin whispered, grinning. “I simply grabbed it up. After all, I am the requisitions officer. Snatching things is my forte.”

A rush of joy shot through Aidan. They’d done it. They’d gotten everything. Nose to nose with Kevin, he grinned.

Kevin’s eyes glittered like silver in the low light. “You know, if this is a vid, I know how the scene ends.”

Kevin was still smiling, his teeth white outlines in his grin. And he was leaning closer. Aidan could feel the heat of his skin, his breath.

“Heroes always get a kiss at the end of the adventure. That’s the convention.” Kevin tipped his head, eyes holding Aidan’s. “Would the hero like a kiss?”

Aidan froze. Was Kevin actually… Was he…?

He wet his lips. His voice escaped as a whisper. “Am I supposed to be a hero?”

Kevin’s smile was soft now, and he was so very close. “I don’t see anyone else in the driver’s seat. So you must be.” Then he pressed his lips against Aidan’s.

Kevin’s lips were hot. Aidan’s brain turned inside out. Kevin was kissing him.

Kevin had started kissing him.

He leaned into the warmth with a pleasure that was almost pain. This was only going to be a second, but if only this second would last.

Softly, Kevin drew back. “Was that okay?”

Kevin’s whisper barely made it through the buzzing in Aidan’s brain. He gasped in a breath. “Um, okay. Yeah.” He swallowed hard and forced himself to sit up. “We-we should get going home…”

Kevin nodded, eyes still holding his as he drew away. “I suppose we should.” O.E. Tearmann lives in the shadow of the Rocky Mountains, in what may become the Co-Wy Grid. They share the house with a brat in fur, a husband and a great many books. Their search engine history may garner them a call from the FBI one day. When they’re not living on base 1407 they advocate for a more equitable society and more sustainable agricultural practices, participate in sundry geekdom and do their best to walk their characters’ talk. Win an eBook copy of “After Hours Game: A Wildcards Christmas!