Hi peeps! We have Anna Butler stopping by today with her new release The Jackal’s House, we have a great excerpt and a brilliant giveaway so check out the post and enter the giveaway! <3 ~Pixie~ 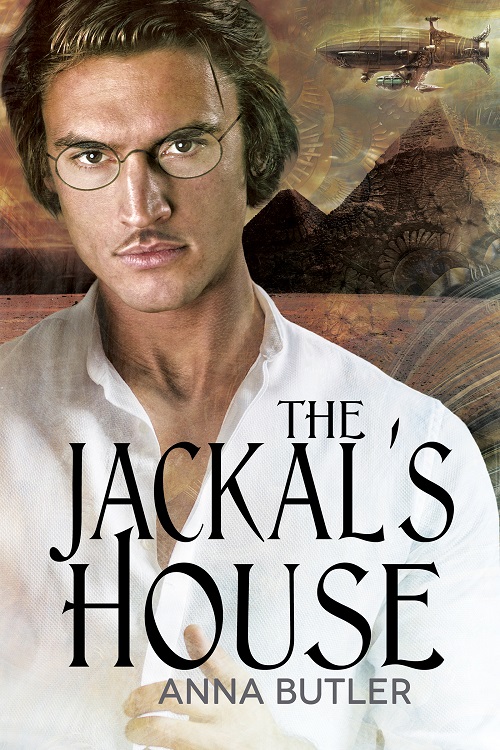 Like Ned, I’d spent years in hiding. His constraint had been matrimony and the sense of honor and duty that would never have allowed him to be unfaithful to the mother of his sons. Only her untimely death had released those bonds. Mine had been less noble: I had no desire for a court-martial and a dishonorable discharge from Her Imperial Majesty’s Aero Corps. Most of my encounters over the years had been quick and furtive, but I’d taken every chance I could to practice my technique.

I not only liked kissing, I was good at it.

Fast little kisses to start with, kisses that barely made contact with the skin of Ned’s throat, kisses meant to tease. He tilted his head back to let me in, closing his eyes. His mouth opened on a soft sigh. I hoped he was giving himself up to the pleasure, losing himself in it, that nothing mattered to him at that moment except the feel of my mouth on his throat and lips. I hoped so. I wanted to please him.

I kissed and licked the delicate skin under his ear until he choked with laughter at the tickling. He tightened his grip on my hands and tugged at them until I raised my head. Ha! He’d lulled me into trusting him there and took full advantage of it. He swooped to capture my mouth with his, cutting off breath and thought, bringing a dizzying warmth with his hot tongue, and making me moan.

Of course, they were very manly moans. Win a $25 (or equiv) Amazon Gift Card!
Win a Signed copy of The Gilded Scarab!

One thought on “The Jackal’s House by Anna Butler Release Blast, Excerpt & Giveaway!”