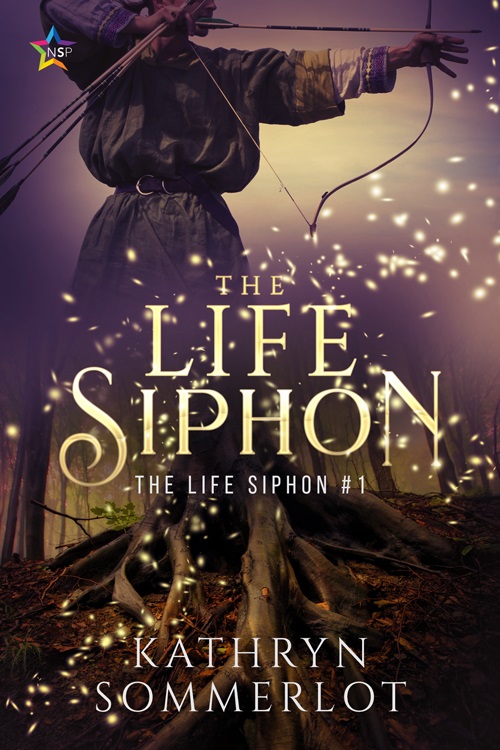 The knock on the door came just as he finished refilling his quiver. Tatsu froze, blood running cold. He put his hand on the leather pack for stability before he was able to oust the lump in his throat. His house was too remote for anyone to simply stumble across it, so whoever it was had meant to arrive. As the air in the small house hung still and heavy, his hand slid to the uneven table with the broken leg he’d never gotten around to fixing, fingers finding the familiar and well-worn hilt of his skinning knife. It was sharp enough to take apart a jack hare. He hoped it was also keen enough to defend himself.

He took a few steps toward the noise, his feet unconsciously finding their way around the long, loose floorboards. He was almost to the door when the knocking came again, impatient. The new round of knocking was paired with a female voice. “Tatsu?”

The anxiety left his body in a rush that felt like the hot sting of Chayd’s summer against his skin, months too early.

“Alesh?” he replied and opened the creaking wooden door. “What are you doing here?”

His first thought was that she had to be injured, sick, or something worse. After all, it had been a long time since she’d last bothered to travel all the way to his hut in the inner woods. But she appeared to be in one piece, her hair worked back into three simple plaits, and she seemed no worse for the wear. Irritation surged through his chest. Knowing she’d been fine but not taking the time to visit made her sudden reappearance cut deeper.

“Please,” she said and, at once, he knew. Alesh wouldn’t journey to his doorstep for any other reason. She needed a favor.

He had half a mind to shut the door right in her face, his insides still untangling themselves from tight knots, but movement flashed behind Alesh’s shoulder. Ral lingered behind her, digging in the constant scourge of weeds growing in front of the house without any care to the dirt embedding itself under her nails. The young woman was laughing at Tatsu’s wildflowers. Her light-brown dress fabric, marking her as enol, or baseborn, was already streaked with smears of mud.

He didn’t close the door, but he didn’t edge it open any further either.

“Hear me out.” Alesh had the good grace to flinch when Tatsu snorted.

Help was not a word that came easily from her, though Tatsu guessed they had wildly different definitions of it. Help to him meant aid and a friendly ear and someone present, offering suggestions and finding solutions. Help was nothing Alesh had ever allowed him to do.

“The last time I tried to help you…” he warned.

She slammed the door so forcefully the ripples shook Tatsu’s arm. “Listen, this isn’t for me, you know. I can’t leave her alone, and I don’t have anyone else.”

Tatsu peered over Alesh’s shoulder again. Ral had gotten a handful of the reedy flowers and pulled them up by the roots, laughing with delight at the white tendrils she’d exposed. When Tatsu’s gaze flickered back to Alesh, her dark eyes were focused on him, narrow and unflinching.

“Please.” The second time sounded much less like a request. She knew she’d already won him over.

Tatsu sighed and called out, “Ral, would you like to come in?”

Ral complied, though she left a trail of dirt behind her as her movement loosened the clumps that clung to her skirt. She might have gotten taller. She was taller than Tatsu, at least. She seemed happy in the house, and Tatsu tried to keep half his attention on her as she moved around, in case she got her hands on the extra snares in the corners. If he had known a houseguest would show up, he might’ve done something with the place.

“It’s only for a few days,” Alesh promised. “This is the safest place I could think of. I mean, who’s going to come way out here? I have some business I need to attend to—”

“Other people’s possessions, you mean? Or is there a new line of criminal mischief you’ve found that pays better?”

She frowned. “That’s not fair at all, and you know it.”

“Do I?” Tatsu asked. “How could I know it, when the last time you bothered to show up here and tell me you were still alive, the first snow had just fallen?”

Her face pinched tight, mouth hard, before it slackened again in defeat. She sighed, equal parts exasperation and resignation, and ran a hand through the few dark strands of hair hanging wild and wavy around her face, too short to plait back.

“Look, can you…spare me the whole spiel?” Her gaze sank and stayed on a spot near the entrance where the beams of the house were embedded deep in the dirt. “I promise you can lecture me all you want when I come back to pick her up. But for now, I really need to go, and I don’t have time for this.”

Tatsu leaned against the door. Behind him, Ral had discovered the utensils for cooking and was excitedly going through them all, copper spoons and mugs clanging against one another. Alesh stood slumped on his doorstep as if the weight of the world hung on her shoulders, hobbling her. She seemed smaller than the last time he’d seen her, under the same sky and a moon tinged with red. He thought about saying something, something like stay, but the times they’d shared had long since passed between them. There had been too many winters and too many summers. The word died on his tongue.

Instead, he nodded. “Fine. But only for a few days.”

“Thank you.” Alesh’s mouth twisted up into a rueful smile. “She’s learned to count to a hundred—you should ask her to demonstrate for you. She loves showing it off.”

Behind them, as if in agreement, Ral banged Tatsu’s ladle against his big iron pot, the sharp crash echoing.

“I will,” Tatsu replied.

Alesh tucked a bit of unruly hair behind one ear. “It won’t be long.” Kathryn Sommerlot is a coffee addict and craft beer enthusiast with a detailed zombie apocalypse plan. Originally from the cornfields of the American Midwest, she got her master’s degree and moved across the ocean to become a high school teacher in Japan. When she isn’t wrangling teenage brains into critical thinking, she spends her time writing, crocheting, and hiking with her husband. She enjoys LGBTQ fiction, but she is particularly interested in genre fiction that just happens to have LGBTQ protagonists. Find out more on her Website.