Hiya guys! We have J. Scott Coatsworth popping in today with his new release The River City Chronicles, we have a fantastic exclusive excerpt and a brilliant $25 Amazon GC giveaway, so check out the post and enter the giveaway!  ❤ ~Pixie~ 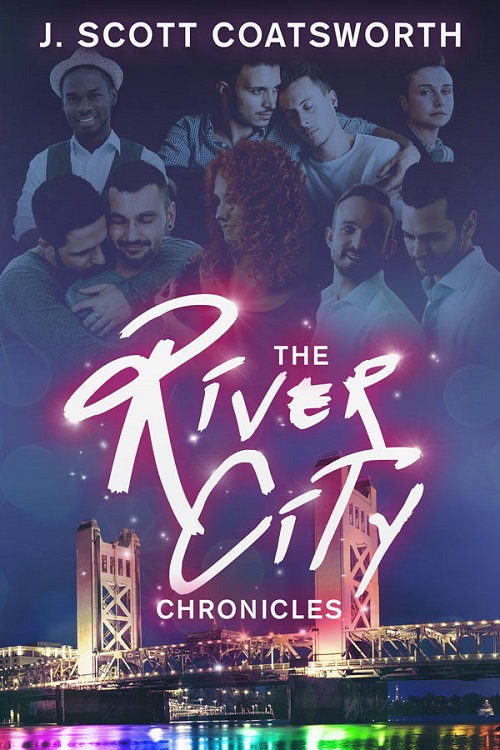 A group of strangers meets at Ragazzi, an Italian restaurant, for a cooking lesson that will change them all. They quickly become intertwined in each other’s lives, and a bit of magic touches each of them.

Meet Dave, the consultant who lost his partner; Matteo and Diego, the couple who run the restaurant; recently-widowed Carmelina; Marcos, a web designer getting too old for hook-ups; Ben, a trans author writing the Great American Novel; teenager Marissa, kicked out for being bi; and Sam and Brad, a May-September couple who would never have gotten together without a little magic of their own.

Everyone in the River City has a secret, and sooner or later secrets always come out. 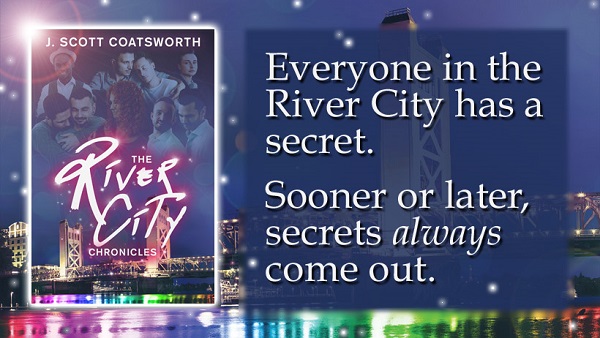 Ben Hammond leaned back in his chair, his half-eaten pizza growing cold on the plate in front of him, his laptop closed. The patio at Pizzeria Urbano was one of his favorite places for lunch—especially while the days were still warm like this, before the chilly weather (and hopefully drought-busting rains) arrived.

The waiter refilled his water glass, but he barely noticed. His eyes were on the redhead walking across the street. She was drop-dead gorgeous. She wouldn’t have been out of place on the catwalks of Paris or Milan, with long legs and a sun dress that made her look ethereal. Like an angel fallen to Earth.

He shook his head—he’d stalled long enough. He was halfway through his writing year—he’d been laid off in the spring from Intel with a generous severance package, and he’d been determined to become a successful writer. He was writing the Great African-American Trans Novel, as he liked to call it. When he could pull his thoughts together enough to actually write.

He snorted. All the authors he knew were also great procrastinators, so by that measure, he was a fantastic writer.

His novel was not autobiographical, but he had, of necessity, pulled from his own experiences to write his main character, Jesse. Jesse was at a bit of a crossroads, caught between his family and his desire to live his life openly as a man. It was a place Ben had found himself five years before, when he was thirty, and that he still remembered with pain. His mother hadn’t spoken with him since then, and his father had lost his memories to Alzheimers without ever accepting that his daughter was now his son.

Nevertheless, the world still turned. Ben woke up every morning grateful for his new identity, his new life. He looked at himself in the mirror and saw a man—his body at long last an external validation of his inner truth.

But poor Jesse wasn’t quite there yet.

The redhead… Maybe it was time for Jesse to take a few steps out of his comfort zone and approach his dream girl. Yeah, that could work.

The rest of the chapter he was working on opened up before him in his head, and he could see the words. “She walked by, like a fallen angel…”

He flipped his laptop open and started to write.

Afternoon was fading into evening when he finished the scene. He was meticulous with his writing—never a word out of place—going over and over and over it until it was a polished perfection. Of course, that slowed him down a bit, but he consoled himself with the thought that he wouldn’t have as much to do on his second draft.

He slipped his MacBook into his backpack and stretched his arms up behind his head. Writing was hard work. Just keeping still and ignoring the world around you to immerse yourself in a character, in a moment in time that only existed inside your own head, took patience and effort.

He glanced at the time on his phone. It was almost six. Time to go to his night job, which gave him a little human interaction and some cash to play with, outside his normal expenses.

The Everyday Grind was just a few doors down. He pushed open the door and waved at Alexis and Toby behind the counter.

“Cutting it a bit close, aren’t you?” Toby said, glancing at his watch.

“Sorry… got caught up in a character.” Everyone here knew he was a writer. Half the time when he wasn’t working at home, he was here instead, laptop at hand. He eased past Daniele, who was making a latte, and went into the back to stash his pack and grab his apron. He rinsed his face in the sink, willing his mind back to the present, out of his story. His characters were always with him, especially Jesse, but he had to tune them out to do his job.

He looked at himself in the mirror, surprised. He looked happy. Laid off, working a part-time job, and writing like a madman, but happy.