Hi guys! We have Damian Serbu stopping in today with his new release The Vampire’s Angel, we have a great excerpt and a fantastic giveaway so check out the post and enter the giveaway! ❤ ~Pixie~ 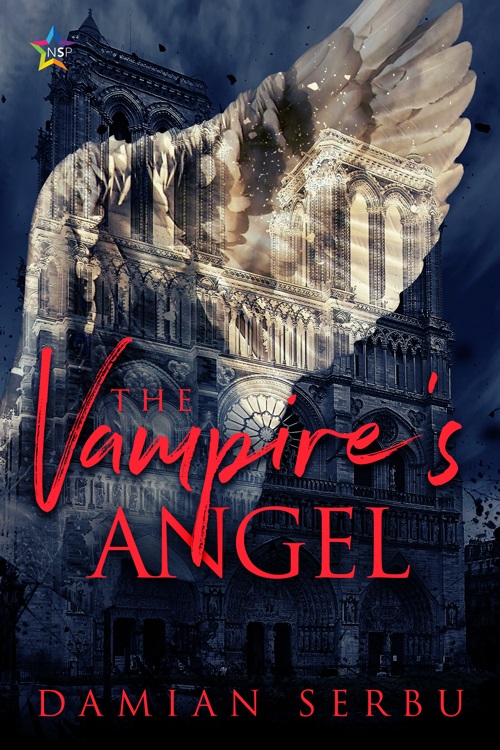 (The Realm of the Vampire Council 01)
by

As Paris devolves into chaos amidst the French Revolution, three lives intertwine.

Xavier, a devout priest, struggles to hold on to his trust in humanity only to find his own faith threatened with the longing he finds for a mysterious American visitor. Thomas fights against the Catholic Church to win Xavier’s heart, but hiding his undead nature will threaten the love he longs to find with this abbé. Xavier’s sister, Catherine, works with Thomas to bring them together while protecting the family fortune but falls prey herself to evil forces.

The death, peril, and catastrophes of a revolution collide with a world of magic, vampires, and personal demons as Xavier, Thomas, and Catherine fight to find peace and love amidst the destruction.

The night at last darkened as Thomas wandered the Parisian streets, feeling the people’s anger. Though the current French environment shunned the wealthy, Thomas’s commanding presence allowed him to walk about with little resistance. Besides, if his personality failed to assuage someone, his American citizenship placated them soon enough. Coming from a land that had already tossed out a king provided him a certain reverence.

The evening proved calm, however, with no one shouting or rioting. Perhaps later, Thomas might venture to the salons for conversation, but for the moment, he watched the common people as he headed from his flat along the Seine toward the Bastille. He sought the poor that evening, not the stuffy rich who bored him even in their nastiness.

Thomas dodged a puddle of mud and almost ran into a wealthy woman.

She grunted but then smiled when she looked up at him. “Pardon me.”

“It was my fault.” Thomas bowed. “I should apologize to you.”

She giggled and walked away, but not before turning around to glance at him one more time.

His reflection in a nearby window reminded him why so many women and men stopped to admire him. His muscular frame, his long black hair tied in a bow at the base of his neck, and his all-black attire, which defied the contemporary fashion of men wearing bright colors, combined to create an allure. Thomas knew he possessed a sex appeal. He captivated them so much they seldom commented with their usual prejudice on his darker complexion.

He turned onto Rue St. Louis and headed north. The houses there were dingier, the streets narrower, and the people dirtier. He traveled well into a residential area and found a secluded corner, the perfect place to watch for that night’s prey.

A few workers stumbled by, already drunk and searching for their homes, then some children frolicked along with a group of women. Still, nothing tempted him. Next, a soldier patrolled the streets and stared at him with suspicion, a prey that proved more to Thomas’s liking. Unfortunately, he saw goodness in the soldier’s face. He would not tempt fate with that one. The young man brushed a lock of blond hair out of his eye and passed as Thomas watched and marveled at his beautiful tight backside when he faded into the night.

Thomas nearly lost his breath when he turned and looked the other way. An angel?

The man had short brown hair, piercing hazel eyes, and soft skin. He carried the slight tone in his muscles, which so attracted Thomas, with a hint of nervousness. Not too masculine, but neither too feminine.

As the gentleman passed, Thomas fell in behind to study him further.

Only after Thomas almost drooled over the beauty in front of him did the clothing hit him. A priest. Thomas shook his head. How on earth did a godlike creature end up serving that vile Catholic Church?

He followed, anyway, hiding among the buildings and trailing so quietly that the priest never suspected a man behind him scrutinized every angle of his body beneath the black robe.

As they passed a narrow street, the priest turned and peered toward the cramped passage, then dashed down it. Thomas rushed to follow and hid in a doorway nearby.

“Can I help you?” the priest asked. “What is it?” He knelt before a young girl, perhaps no more than four, and placed his hand on her shoulder. She sobbed and slumped against the priest, who wrapped his arms around her. “Talk to me. You’re safe. What can I do?”

“Well, Delphine, we’ll find your home. Can you give me some clues?”

Thomas listened as the priest quizzed her. She relaxed as the conversation continued and giggled as the priest joked and moved down the long alley with her, talking to her until he stooped down and picked her up while continuing to chat.

“Do you think we’re close?” he asked.

“I think so.” She looked around, clinging to him.

“Ah! Delphine!” A woman ran toward them, so the priest put the girl on the ground and stood aside as she sprinted to collapse in the woman’s arms.

“I’ve looked everywhere for you,” her mother replied. “What did I tell you about wandering away? We have just moved, after all. You’ll get lost in this big city.” Then she crossed herself. “Abbé, God intervened yet again to save my daughter.”

“Merely one of his servants, Madame.” The sound of his resonant voice sent waves of passion through Thomas.

“You owe me nothing,” the priest said as he turned to Delphine. “And you, little one, you must be careful in Paris. You can get lost easily, so stay close to your mother.”

She giggled as he tickled her stomach. “I will, Abbé.”

After they left, the priest turned and his eyes widened when he saw Thomas. He paused.

“Monsieur, pardon me. I didn’t see you.”

“I didn’t mean to startle you, Father. Good evening.” They gazed at each other for a long moment.

“No harm. Good evening, sir.” The priest nodded and walked away.

Too good to be true. Thomas stalked the priest as he turned the corner and entered the gate of a small church. There, Thomas leaned against a building, breathing heavily from the passion that erupted inside him, a longing he must satisfy. He wanted to stand outside the church and wait for the priest, or even knock on the door and talk to him again, but he was too unsettled. He remembered an establishment nearby that would serve his purpose well, so he raced to it, slammed through the doors, and sat before he fell, when a young man of about eighteen years approached him.

“Monsieur, you look unwell. Can I assist you?”

The youngster wasted little time. He needed a bath, but otherwise presented an adorable face and solid little body.

“What are you offering?” Thomas smirked.

“Come, I’ll show you.” He grabbed Thomas’s hand and pulled him up a stairway and into a dimly lit room. “I assume you know this’ll cost you, and that I don’t play the passive role.”

“Quite the entrepreneur. I can pay what you charge.” Thomas closed the door and embraced the youth as he kissed him. With great speed, he threw the youngster onto the bed and tore off both of their clothes.

“Slow down,” the young man pleaded.

Thomas did so and kissed the boy’s neck. His fangs descended, and he softly pricked the dirty skin to taste the blood before he took their interaction further.

“Do you enjoy biting?” the boy asked.

“Only momentarily,” Thomas replied before he plunged his fangs into the vein for a deeper taste.

As the hot liquid flowed across his lips, images of the boy’s life saturated Thomas’s mind. The vision confirmed what Thomas already ascertained. The young man prostituted himself part-time and was a useless degenerate who attacked and robbed innocent people. He assaulted children, including his brother, for sport. Ah, yes. And, of course, he murdered without remorse.

He grabbed the young man’s hair and kissed him, then rolled him over against his will. He struggled for the first time, but Thomas held him tightly.

Thomas clamped his hand over the victim’s mouth. “Relax.” He stopped squirming and Thomas let him go. “What if I double the price? Or triple it, even?”

The lad contemplated for a moment. “Triple? Just to bugger me?”

“Fine. But I won’t like it.” Yet he ground his ass into Thomas’s crotch.

Thomas thrust inside of him and pounded. The young man wriggled and bit his lower lip, but he never tried to stop Thomas until the vampire finished, his tension released as he exploded inside the nice bubble ass.

Sated, he released the lad, who pushed him off, cursing. “I told you, and I warned you, you ass.” He scrambled off the bed and snatched a knife from under the mattress, and in his nakedness came toward Thomas.

When the youth tried to stab him, Thomas grabbed his wrist and squeezed hard until the blade dropped to the floor. He pulled the young man toward him and stared into his eyes, his expression terrified.

“I thought we had an agreement? Besides, you can’t win. You won’t haunt this city anymore. Go peacefully.”

Thomas bent the boy’s head to the side and plunged his fangs back into the flesh, sucking the delicious blood until the youth’s heart stopped.

Thomas kissed the puncture wounds to heal them and flung the corpse to the floor before dressing, loving that a large city meant no one questioned yet another death. Sexually satisfied and fed, he brushed his clothing off before hurrying down the stairs and out the door without anyone noticing. Damian Serbu lives in the Chicago area with his husband and two dogs, Akasha and Chewbacca. The dogs control his life, tell him what to write, and threaten to eat him in the middle of the night if he disobeys. He previously authored several novels now out of print, and is excited to reignite his writing with Ninestar Press!

Coming this fall, his latest vampire novel: The Vampire’s Protégé. Keep up to date with him on Facebook, Twitter, or at www.DamianSerbu.com