Hi guys! We have Ruby Moone stopping by today with her new release Thief of Hearts, we have a great excerpt and a fantastic giveaway so check out the post and enter the giveaway! ❤ ~Pixie~ 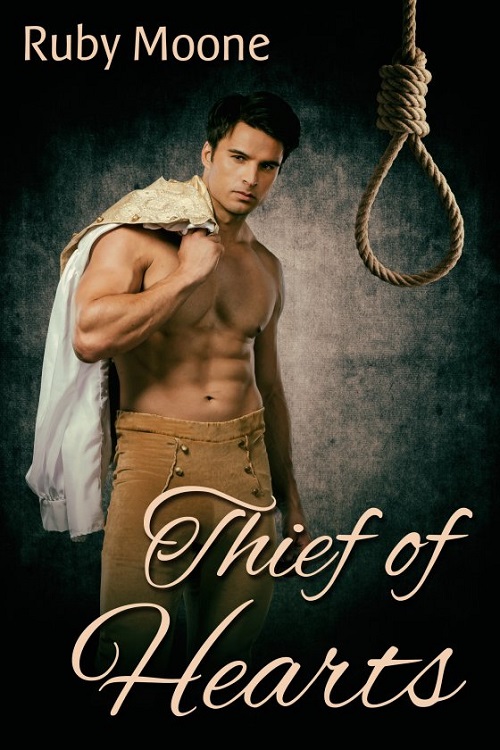 It’s 1806 and aristocratic, bastard born jewel thief, David Lambert has few rules in his life. Never bed the staff, never bed a man more than once, and never kiss. In the space of one weekend, all his rules are shattered by a stunning, violet eyed footman with a secret.

When Jeremy is flung into Newgate for a crime David committed, it’s a race against time to get him free and David is forced to face up to his past, his family, and accept that he might have a future if he has the courage to fight for it.

David hammered on the door of Charnley’s Grosvenor Street mansion and, finding the door unlocked, let himself in. He strode through the hallway, boot heels ringing on the marble floor, and was met by a flurry of agitated staff.

The butler emerged and addressed him in condescending tones, but David brushed him aside. “Where is he? Study?” he stalked across the hallway and headed for the study door with the staff flapping behind him. He threw open the door, but there was no-one inside.

“Charnley!” he bellowed. “Get out here now.”

The flurry of footmen was swiftly replaced by burly, determined looking grooms, so David pulled out a brace of pistols from the back of his breeches and aimed them.

“Hold it right there,” he said, and the men stopped. “I have no quarrel with you, but I will see Charnley. Anyone who tries to stop me will be shot. Those of you who know me know I will do it.” He raised the pistols and waited. No-one moved.

“What in God’s name is going on?” Charnley appeared, leaning over the gallery balcony, then running lightly down the stairs wearing only his shirt sleeves and waistcoat. “Lambert, why are you causing ructions in my home? For God’s sake, man, put the pistols down.”

“First, call off your lap dogs.”

With a flick of a hand, the staff were dismissed, but David held onto the pistols. “Shall we?” he asked, nodding towards the study. He slammed the door shut behind them with his boot.

“Get him out. Whatever you want from me is yours, just get him out.”

Charnley frowned. “What the hell are you talking about?”

David stalked across the room, gun in hand and put the muzzle against Charnley’s chest. “You have until the count of three to tell me you will get him out. If you do not, I will shoot you and get him out myself.”

Charnley staggered back and held up both hands. “What … who are you talking about? Get who out of where?”

“Lambert, I do not know what…”

“God… man will you … Oh Christ. Not Naylor?” A look of genuine shock on Charnley’s face surprised David.

“Yes, yes… of course I will help. Just put the fucking gun down.”

David lowered the pistol slowly, and Charnley backed away, one hand going to his throat. Sweat stood out on his brow.

“Get your coat, get down to Newgate, and undo whatever lies you told to put him in there. Now.”

Charnley lifted both hands. He was a little taller than David, and heavier having a few years on him, but he was treating him with a healthy respect. “Now, listen to me.”

“I’m listening. Get your coat.”

“David, I will do everything in my power to get Naylor out, but we have a serious problem here.”

“He is not there because of anything that I did. I did not order his arrest.”