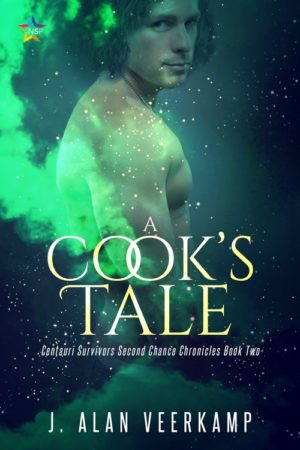 Blurb: After a breakup, Erron Murfin finds himself broken, homeless, and destitute. The chance to become the Santa Claus’s new cook is a beacon he can’t ignore.

The new position allows him to work under Gamin Rockwell, the man who helped raise him until he disappeared when Erron turned nineteen—well over a decade ago. While the two make up for lost time, Erron catches the eyes of many crewmen as well as James and Barrus, a married pair with real intentions who are determined to draw the cautious new arrival into their relationship.

Even as he stitches together his ability to see a future for himself, Gamin’s history and personal issues begin to surface. Secrets bubble out in ways Erron can’t ignore and he finds himself with a mystery he needs to solve.

Because there’s something about Gamin that goes far deeper than the fatherly role he once held in Erron’s life so long ago.

Review: While I enjoyed this tale about Erron and Gamin I was disappointed that there was no action scenes in it. After all it is a sci-fi story. Nevertheless Erron captivated me from the start as he lost everything and was hired on the Santa Claus as a cook.

The man who was like a father to him and disappeared, Gamin, is also on board. What starts out as a get to know each other better turns into a tension filled story with Erron on the receiving end of cold shoulders after a question leaves Gamin in depression.

He takes Barrus and Jamie up on the offer of comfort much to the dismay of Gamin. I had already figured out Gamin’s feelings for Erron and was happy with the outcome. Though Erron was stricken in the book and had to adjust his life due to circumstances beyond his control it all worked out in the end.