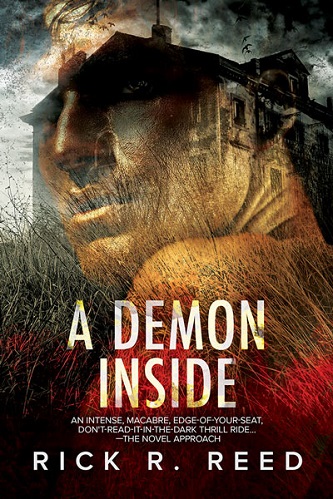 Title: A Demon Inside (3rd Edition)

But will the house be the sanctuary he had hoped for? Soon after moving in, Hunter realizes he may not be alone. And who — or what — he shares the house may plunge him into a nightmare from which he may never escape.

Sparks fly when he meets his handsome neighbor, a caretaker for the estate next door, but is the man salvation…or is he the source of Hunter’s terror?

The story itself has left me with some rather mixed feelings. This book isn’t a romance, means that any romance is not front and centre of the plot, and what romance there was throughout the story was really nicely done. However, it is not that aspect that has bothered me. The horror was fantastically written and I really enjoyed it. In hindsight, though, I think that there was some sort of spark missing with the horror that connected all the dots for me in my head. But mostly, I found that after the build up in the horror and the terror felt by Hunter, the ending was a little too flat and a little too quick for my liking.

Nonetheless, this book does the creepy and poltergeist things perfectly, so on the surface this is a fantastic horror story which may well leave you with chills running down your spine.

The story follows Hunter Beaumont and finds his life at loose ends when in a tumultuous short period of time his beloved grandmother dies and his boyfriend dumps him. In a move that is something like a classical gothic horror, Hunter decides to live in Beaumont House after being told by his grandmother on her death bed to burn it down. Beaumont House has no end of secrets (which leads Hunter to uncover the memory of when his parents had died when he was a child) and some of them are quite deadly (this is one house with a bad history).

The subplot featuring the neighbour of Beaumont House, Michael, is where the romance comes in. Michael is a sweet guy and matches well with Hunter. However, Hunter seems to spend a lot of time doubting his new relationship and I’m not entirely sure whether or not this is actually to do with the “demon” of Beaumont House or just Hunter being insecure. This adds a nice, lighter plot to the otherwise dark/horror we otherwise get.

Despite my conflicted feelings, this is a good book and anyone into horror and anything that is generally just creepifying (in the words of Joss Whedon) stories will at least enjoy this read.