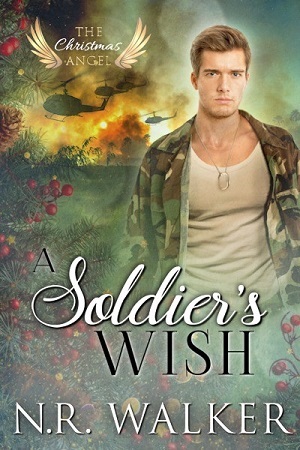 Gary Fairchild is proud to be a hippie college student, and he protests the Vietnam War because he believes in love and peace. To him, it isn’t just a counterculture movement—it’s a way of life. When tickets to the Aquarium Exposition—3 Days of Peace & Music, or Woodstock, as it was better known, go on sale, there’s no way he isn’t going.

Richard Ronsman is a sheltered farm boy who lives in the shadow of his overbearing father. He’s hidden his darkest secret to earn his father’s love, but nothing is ever good enough—not even volunteering for the Vietnam War. And with just a few days left before he’s deployed, a striking hippie invites him to join them at a music festival.

Three days of music, drugs, rain, mud, and love forged a bond between these two very different men that would shape the rest of their lives. They share dreams and fears, and when Richard is shipped off to war, they share letters and love. For Richard’s first Christmas home, he is gifted a special angel ornament that just might make a soldier’s wish come true.

Review: Three days is all it takes to find love. A young man who believes only in peace and love, and a man who will do anything to get his families approval. Richard is a naive young man who has spent his whole life on a farm. Nothing he does will ever get his fathers love, but he does the one thing he thinks will get it. He joins the Vietnam war as a volunteer. He decides to take a invitation up and goes to Woodstock, with Gary.

Gary does not believe in the war. He just believes in his heart. He invites Richard to spend three days at Woodstock with him and to enjoy. They make a promise a to always stay in touch. This is a magical time for both men and in a time where it is really dangerous.

This story is told in a weird way. It goes from the moment they meet to eght years later. You go from Woodstock all the way to San Fransico. A young man forced to join a war he didn’t want to be in just to please his family and comes back broken in more ways then one. So this story is full of pain and angst, but does have its happy parts as well. It is a well told story that will have you in tears and have you smiling as well. They make a Christmas wish that an angel brings true. It is a sweet Christmas story that will make your heart swell with the best of them.

Now to the down side to the story. It didn’t really catch my attention like it should have nor did it keep it. I don’t really care for stories that are not in the future so to speak. It doesn’t really do anything for me and wasn’t really my cup of tea. That is not saying it isn’t a good book, but it just wasn’t for me.