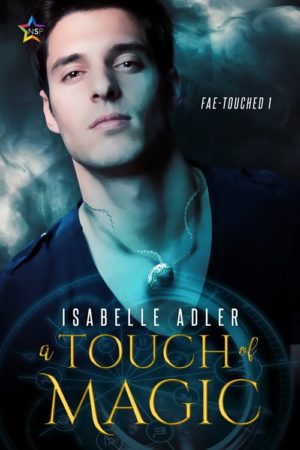 Title: A Touch of Magic

Blurb: After returning to the straight and narrow, Cary Westfield hopes to rebuild his life as a stage magician. Only thing is, the success of his new show is entirely dependent on a strange medallion inherited from his late grandfather—an amulet that holds a rare and inexplicable power to captivate the wearer’s audience.

Ty prides himself on his ability to obtain any item of magical significance—for the right price. When a mysterious client hires him to steal a magical amulet from a neophyte illusionist, he’s sure it will be a quick and easy job, earning him a nice chunk of cash.

As it turns out, nothing is sure when greed and powerful magic are at play. When a mob boss with far-reaching aspirations beats Ty to the snatch, Cary and Ty form an unlikely partnership to get the amulet back. The unexpected spark of attraction between them is a welcome perk, but each man has his own plan for the prize.

All bets are off, however, when it is revealed the magical amulet holds a darker secret than either of them had bargained for.

Review: Ty and Cary meet when Ty steals an amulet from Cary. After Ty gets the amulet it’s also stolen from him by the mob. This is where Cary and Ty hook up to get the amulet back. I loved both Ty and Cary’s backgrounds as they were brought into the story. This is a fast paced story with a lot of suspense and keeping ahead of those after the amulet or them.

Even though it seemed too fast for the two to get together it was still a brief reprieve from the actual plot. The danger was real for the two men as they set their plans in motion. There is a lot going on in this story from a sorceress to sorcerers and magic as the story unfolds.

I have to admit I was interested in Ty’s seemed connection to the fairy realm but it was not embellished on in this story so I assume we will find out about it in future books.