Hi guys, we have Con Riley stopping by today with the tour for her new re-release After Ben, we have a great excerpt and a brilliant giveaway so check out the post and enter the giveaway! ❤️ ~Pixie~ p.s. keep an eye out for Prime’s review! 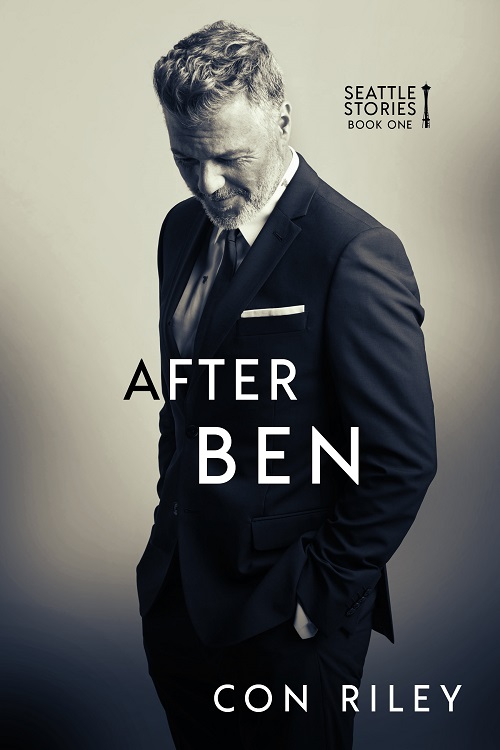 He’d struggle from his spot in the parking lot and into the apartment building, juggling bags as he pushed the elevator button, wishing he had an extra pair of hands. Burdened with too ambitious a load of brown-bagged groceries, he’d finally arrive at his own front door, only to figure out too late that he couldn’t reach his keys.

Sometimes he would bring work home, balancing his briefcase, laptop, and bag of takeout precariously on an office file box, and face exactly the same predicament. For years he had bruised his nose, pressing it against the buzzer until Ben opened the door for him. It was worth his gentle mocking and slow eye roll of resigned amusement to get a little help.

Tonight was one of those forgetful times. It was the first occasion for a while—weeks, maybe—that he’d felt the sudden clutch of regret and surprise, still sharp, still poignant, that made his heart race for a while when Ben failed to open the door.

Instead of carrying his load into the kitchen, where he could at least leave it on the counter, Theo dumped it onto the too-narrow hallway table. It stood below a huge ornately framed mirror, which had been a bitch to get shipped from Milan, Ben’s hometown. When a few files slipped out of his overloaded file box, covering the floor with red-inked invoices and tax-deductible receipts, Theo cursed.

Bracing himself by leaning heavily on the walnut table, he sighed, then stared at his reflection. Backlit by August evening Seattle sunshine, he looked all of his forty-two years. The dimples that Ben used to trace with his fingertips, encouraging him in his sexy Italian accent to “smile, tesoro, smile,” seemed etched a little deeper into his cheeks. The skin below his dark gray eyes appeared bruised, and while the rest of his face was only slightly lined, the glint of silver at his temples looked less refined against his light brown hair and more… well, old.

Wondering just when he’d turned into a gaunter version of his father, Theo gathered up his paperwork before dumping it on the desk in his study. He wandered into the kitchen, searched the freezer for something marginally interesting to eat, and began his usual evening ritual.

First, food. He put a meal for one in the microwave and hoped for the best, trying not to dwell on how dinner used to mean walking through the kitchen doorway into an invisible wall of garlic, basil, and effusive Italian culinary cursing.

Next, a quick shower before changing into his pajamas. It used to drive Ben crazy when he’d change immediately after returning from work. Ben always said that in Italy the fun truly began the moment work was finished. He would follow Theo to the bedroom, saying, “The day is only half over, tesoro. Why are you ready for bed? We have places to go and people to see.”

Sometimes he did genuinely forget that they were heading out, but there was fun in a little deliberate provocation too, in driving Ben slowly crazy until he’d snap. Theo thought a brief loss of temper had been so worth the sudden shove against a wall, strong hands tugging at his hair, as Ben explained, in his beautiful, husky Italian accent, just how annoying Theo was.

Then he’d catch Theo’s smile and slowly smile back, punctuating his grumbling with kisses before pulling away, shaking his head until Theo provoked him all over again.

Now Theo pulled up his pajama pants and tried to think about something else—anything—while walking down the hall to collect his laptop. He ate his dinner in the living room, cruising news websites as he half listened to the TV. After cleaning up, he spent a little time shuffling his paperwork back into order before concentrating for another solid hour on ratio analysis at his desk.

The work could have waited until morning. He could have left it to one of the assistants to wrestle into shape before passing it on to one of the accountants. But that would mean a long evening stretching out with nothing but watching TV alone, or listening to music while he tried to concentrate on a magazine or novel.

He reasoned that columns of figures were more tolerable than the tight clench of regret that familiar music could wrap around his ribs. Yes, plowing through paperwork was so much better, on balance, than recalling Ben’s huge grin as he looked back over his shoulder—tan and gorgeous—after finding the perfect spot to listen to an outdoor concert.

Getting ahead on the next day’s work was more bearable than pretending to read while trying not to stare at the pictures and ornaments that decorated the walls, souvenirs of their myriad vacations together. He’d rather tally figures or make notes for the next day’s meeting than think about Antigua, Milan, or that terrible time in Provence.

Tucked up in his too-big bed by ten, apartment tidy, clothes ready for the morning, Theo finally did something purely for his own pleasure. Pulling his laptop toward him, he logged into his guilty secret—a local political debate forum—and looked for people who were wrong. When a newbie started making ridiculous, unsupported, left-wing statements, Theo cracked a smile that left him looking at least a decade younger.

New members arrived in a blaze of righteousness on the Internet forum regularly enough for Theo to predict the eventual outcome. Sometimes they would use the message board as a platform from which to lecture. Sometimes their one-sided commentary was amusing; oftentimes it proved incredibly annoying, especially when inserted into conversations among longstanding members. Most times, though, newbies came, ranted for an evening, then were never heard from again.

Theo’s first comments on the forum, posted almost a year before, had been met with the same initial indifference that tonight’s newest member received. The debate about oil pricing continued, much like the course of a wide river. While the main thrust of dialog surged ahead relentlessly, smaller discussions on points of related interest formed shallow pools along the riverbank. Theo watched the newbie shout, flail, and then start to drown in the depths of the main discussion. Sighing, he waded in to offer a virtual lifeline back to calmer waters.

Sending Morgan, the new member, a quick welcome message along with some links to prior discussions, Theo advised him to sit back and read for a while.

Theo lost a few hours in the company of strangers that he had come to think of as his invisible friends. When he yawned hard enough to make his jaw crack, he added his good-nights to the social thread before starting to log out.

The ping of an incoming private message caught his attention.

Clicking idly, ready for sleep, Theo noticed that the newbie had followed at least a few of the links he had sent earlier that explained how to personalize forum settings. Under a brand-new Che Guevara avatar, his message read:

MORGAN: These people are fucking idiots.

Snorting softly, Theo shook his head and began to close the laptop just as another message arrived.

After logging out and shutting his laptop down, Theo pulled up his bedsheets and stared at the ceiling for a while. So many people came and went from the forum, but it had been a constant in his life for nearly a year. He’d shown his own ass enough times in the early days when he was still reeling with shock and anger—often drunk—to excuse a newbie’s rudeness. He’d lost hours pursuing online arguments as a way of expressing his impotent devastation, and thinking back, he’d been allowed a lot of leeway by some of the more established members.

Theo hadn’t forgotten their sometimes-abrasive kindness. It cost him nothing to extend the same tough love of “sit back and shut up, fool” to someone else.

That was the beauty—and the hidden cost—of Internet relationships, he guessed. Bonds of electronic friendship could be transitory, fragile… and Theo could never be entirely sure what someone’s backstory might be. Maybe this new guy, with his strident social-reform voice, worked in the nonprofit sector. Maybe he was a frustrated old hippie. Either way, he would learn to accept the give and take of message-board conversations, or he would be ignored.

Theo fingered the fabric of Ben’s pajamas under the pillow on Ben’s side of the bed. With thumb and forefinger rubbing together in slow circles, soft cotton between them, he drifted off to dreams of slow dancing with Ben.