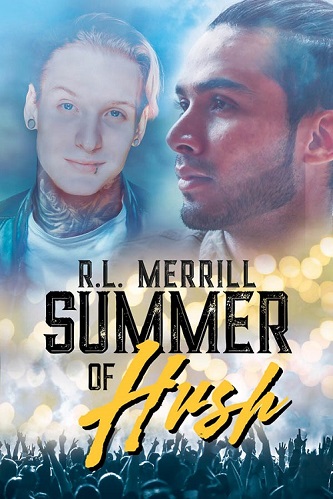 Blurb: Hush is back… and it’s about to get loud.

After two years grieving the death of his best friend, Silas Franklin is back on the road with his metalcore band, Hush. With a new member, a brilliant new album, and a headlining spot on the last cross-country Warped Tour, life couldn’t be better—unless Silas could meet the intriguing music blogger known only as the Guru. Silas has followed his blog for years and feels the Guru might be the only person who “gets” him.

For years Krishnan Guruvayoor has reported on the metal scene as an anonymous blogger, and he’s just landed an internship on the Warped Tour as well as a potential position with a well-respected music magazine. His best friend arranges for him to meet singer Silas Franklin—but only as Krish the Intern. Their chemistry is instant, and Krish is thrilled to get to know the man behind the music.

The rock star and blogger quickly go from meet-cute to cuddle session, but secrets, overprotective bandmates, meddling media, and a terrible accident all conspire against them. Can their romance survive the summer of Hush?

Review: Kris is a blogger who hopes to one day write for an alternative rock band magazine. He starts his internship with the Warped Tour and is quickly introduced to his secret crush Silas from metal core band, Hush. The two hit it off instantly and the chemistry is off the charts.

Silas has been intrigued with a blogger named guru for years. When he meets Kris he is smitten. Despite many obstacles thrown at these two between meddling bandmates and secrets they seem to be made for each other.

I wish I had liked the story more but I’m not a fan of rock stories unless there’s something more with it.

The story was good and I liked the interactions the characters throughout the book. But it was not enough to make me love the book. I’m sure others who are into this type of story will be thrilled with it.