Hi guys! We have J.S. Fields popping in today with her new lesbian sci-fi release Ardulum: Third Don, we have a great excerpt and a fantastic $10 NineStar GC giveaway, so check out the post and enjoy!❤ ~Pixie~ 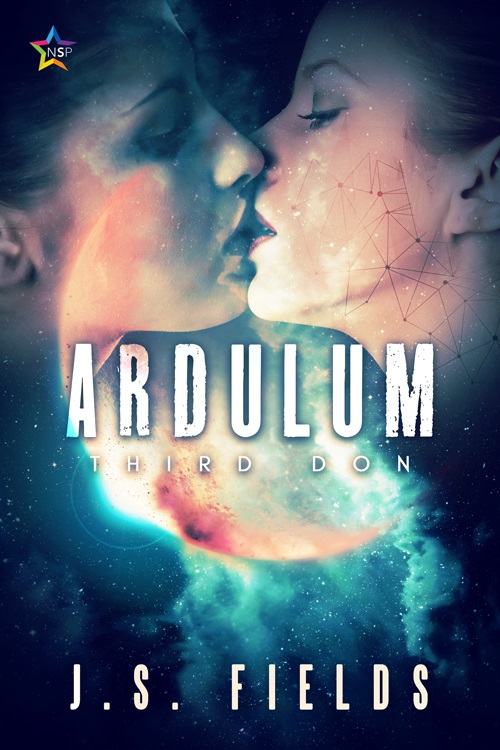 Atalant is torn between two worlds. In uncharted space, head of a sentient planet, the new eld of Ardulum now leads the religion she once rejected. Emn is by her side, but the Mmnnuggl war brewing in the Charted Systems, threatening her homeworld of Neek, cannot be ignored. Atalant must return to the planet that exiled her in order to lead the resistance. She must return home a god, a hypocrite, a liar in gold robes, and decide whether to thrust her unwilling people into the truth of Ardulum, or play the role she has been handed and never see her family, or her world, again.

“I’ve just lost my last engine! We’re making repairs, but if we can’t dodge another hit—” The audio cut off. A small, blue light on Ekimet’s console went dark.

Inside the Neek’s main temple to Ardulum, Ekimet laid zir head in zir hands and, not for the first time, tried to will the light to come back on. It didn’t work. It never worked. All the power of Ardulum, and Ekimet couldn’t save even one Ardulan life.

The andal bench upon which zie sat lacked cushioning, and the wood was warm through Ekimet’s gold robes. Zir tailbone hurt from sitting and waiting—and zir heart hurt from watching and trying to coordinate a battle zie had no skills for. No one in the room did. The Eld had ensured that.

Ekimet brought zir head back up. Next to zir, Miketh tapped on the andal table, a thin sheet of bioplastic just beyond her reach. Her black hair had lost its red highlights. Ekimet hadn’t noticed until now, and zie didn’t have time to consider what it meant aside from neither of them having gone outside in a month.

The High Priest of Neek was on the other side of the wooden table. He was supposed to be helping, inasmuch as he could as a subspecies Neek amongst Ardulans. Right now, however, he sat, eyes unfocused, wringing his robes as he whispered, “Seven. Seven Ardulan cutters and fourteen skiffs lost.”

“Central, copy? Copy, please!” The Neek accent was clear over the transmission and startled Ekimet. It was a settee pilot, one of the Heaven Guard.

“We hear you, guard,” Miketh answered. Her hand shook as she reached for the bioplastic sheet. It was just far enough on the other side of the table that the high priest had to push it towards her. “Report?”

“The Mmnnuggl pods in orbit, both big and small, are now guarded by at least four of the oval ships the Ardulans can’t seem to hit. There are Risalian cutters out here too, and a bunch of ships I don’t recognize. No matter how much interference we run for the Ardulans, it isn’t making any difference. Nothing is making a difference. The Mmnnuggls are picking off the cutters one by one.”

“Is your squadron still intact?” Miketh asked. “No Neek casualties?”

The voice came back confused. “No, no casualties to report on our side. The Mmnnuggls only seem interested in…” On the computer console in front of Ekimet, another pale blue light went dark.

“We lost another skiff,” Ekimet reported in a monotone. “Only four remain, along with two cutters.”

“One cutter,” the guard reported hesitantly. A red light went out on Ekimet’s console. “A group of four pods just disintegrated the largest one.”

Ekimet squeezed zir eyes shut. There were over forty Ardulans on each cutter and two per skiff. It had been less than an hour since the Mmnnuggls had engaged the Ardulan fleet. What was happening? That the Ardulans and Neek would lose had never been in question, but they weren’t meant to lose like this.

Ekimet leaned towards Miketh and the speaker. “Tell the remaining cutter to—”

One of the skiff pilots cut into the feed. “We just lost our last cutter!” The last red light on Ekimet’s dash went out. “Ekimet, we have to land. We haven’t got a chance with the—” The line went dead. The final three blue lights died in quick succession.

There was silence for a long moment, followed by the uncomfortable shuffling of feet. The Ardulans were dead. Every ship the Eld had sent, every Ardulan onboard, was now scattered in fragments across Neek space. Ekimet and Miketh were…they were stranded. Again. They, and the Neek planet, had no protection.

“My lords?” The settee pilot was back. “The Mmnnuggl forces are leaving the engagement zone. Their allies are following. The Heaven Guard are still in orbit. Would you like us to follow instead of simply watching and reporting?”

“No!” Miketh said quickly before Ekimet could answer. “You have no weapons. Don’t make a threat you can’t carry through. Just…just come back.” She looked at Ekimet, moisture beading in her eyes. She hastily wiped at it with the back of her hand. “Just come home, okay?”

Relief flooded the pilot’s voice. “As you say. I’ll tell the rest of the Heaven Guard.”

The transmission ended. Miketh sniffed, and Ekimet did the same, although zie was far too well trained to let tears form.

“Is it over?” The high priest pushed his chair back from the dark andal table, his eyes on Ekimet’s chin, never higher. “Will they leave? What do they want?”

We are about to find out. Miketh pointed at the yellow line streaking across the dash. Call for you, Eki. We both know how this ends.

Indeed. They’d been sent here to die, the same as the fleet. Sent to appease the Mmnnuggls. Sent to keep Ardulum safe. Ekimet slid zir finger across the yellow line, and an audio feed beeped. Zie could have turned on the Neek’s archaic hologram projector, but…zie couldn’t look at a Mmnnuggl. Not right now. Not with so many dead bodies floating above zir.

“You have lost,” a monotone voice said over the comm.

“We understand that. Only two Ardulans remain, and we are prepared to surrender. We…we thank you for not harming the Neek forces.”

A low trill resounded before it changed to words. “Only Ardulans harm unarmed civilians. Only Ardulans would use a seeded planet of primitive sentients as a sacrifice.” The Mmnnuggl screeched. “Do you think we do not see a ruse when we see one? We have no hands and no feet, so therefore we have no minds?”

Ekimet tried to cut in. “We never meant—”

“You are of no concern to us. Two Ardulans mean nothing.” There was a whirring in the background, and then a new voice came on.

It didn’t have the usual clicking undertones of a Mmnnuggl accent. This voice, although deep and throaty, carried Common with ease. “Call your planet,” it said. “Call your planet and tell them to send the Eld of Ardulum and the flare named Emn. You have one week to comply.”

“One week!” Miketh said, her voice unusually high. “The Neek operate on stable wormhole technology. The time frame is unmanageable. Beyond that, if you aren’t bargaining with Neek lives, what is your collateral? The Neek planet is self-sustaining. They don’t care to travel. If you think Ekimet and I will get frustrated enough to call the Eld here so you can slaughter them, you’re as dumb as we thought!”

Laughter, biped laughter, came from the other end. “Underestimating the Nugels is a really, really stupid thing to do. One week, Ardulans. I suggest you start moving the Neek people to the cities. In one week, if we don’t have the Eld and the flare in-system, then we are coming down to the planet. Well, the smaller pods are, anyway. They’ll come down in the middle of the night when all the little Neek children are tucked snugly in bed, and they will set your forests on fire.”

“You will destroy the Systems if you destroy the andal of Neek!” Miketh exclaimed. “Their entire cellulose infrastructure is rooted in this planet. What happened to not harming the defenseless?”

Chittering rose up from the feed before the male voice drowned it out. “The whole of the Charted Systems is behind this decision. They understand the threat Ardulum poses. Physically, the Risalians are here, along with Minorans, the Oori, and more than a dozen other species from the Systems and the Alliance. A week is plenty of time to move the forest-dwelling Neek out of harm’s way. The Nugels are going to have their vengeance, Ardulans, and we will find the altered Ardulan woman. You just have to decide how much of your planet you want burned.”