Hi guys! We have Madeira Desouza stopping by today with the tour for Baja Clavius, Madeira answers a question for us, we have a great excerpt and a brilliant $20 Amazon GC giveaway so check out the post and enter the giveaway!  ❤ ~Pixie~ P.S. keep an eye out for my review coming soon! 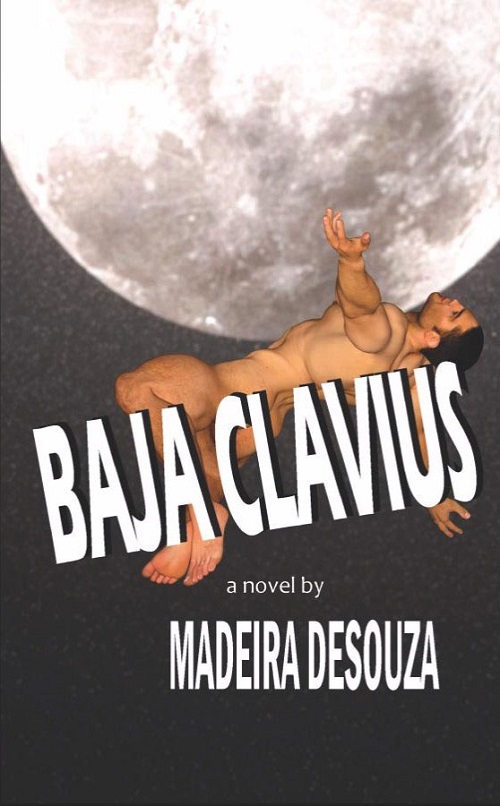 This controversial science fiction adventure depicts gay male time travel agents with very bad behaviors. They are violent and immoral men. A few hundred years from now, these time travel agents work within a top-secret agency located beneath the crater Clavius on the moon. Their time-travel missions take them to Earth in the past where they ruthlessly manipulate man who are targeted for their roles in the outcomes of historical events such as the Oklahoma City bombing in 1995. How would you describe your writing style?

Readers have told me my style reminds them of Russell T Davies of Doctor Who, Torchwood, and Cucumber and Banana fame on the BBC. I favor the use of sarcasm and self-deprecating humor in how my characters speak to one another.

As seen in Torchwood as well as Cucumber and Banana, the man-on-man sexual escapades that my characters get involved in might just inspire the reader’s laughter. But readers might also feel sorry for characters because their sexual behaviors invite tragedy into their lives.

I’ve also worked hard to give my science fiction time travel writing a unique slant: I deal with changes in memories that time travel agents retain in their minds. Each person in real life is framed and defined by their memories, so what happens to time travel agents who have to be brainwashed upon their return from missions to the past so that they are not traumatized by the consequences of their actions? Yesterday I was lost and I died. Today I am alive again. I accept the truth about foregone tomorrows and my resurrections from the dead.

I do not claim to be a believer in a deity or a religion. Yet, I have personally experienced being repeatedly brought back to life after death. Something far more powerful than us human beings resurrected me. And now, everything I have learned about living, dying, and then coming back for more is presented here.

I have been coerced into creating this journal of my experiences. I will suffer if I am less than completely truthful. I will be held prisoner until I have completed this in full.

I work for a top-secret international agency that is so deeply concealed nobody could possibly find it. Baja Clavius is the name of the international base of operations where I live. It is from that base that I travel in time to work assignments on Earth.

Desperate efforts by others to censor this work all have ended in failure. Just to confuse you, others have circulated conflicting versions of this. But I defeated all my enemies who wanted to prevent you for seeing this.

I begin by sharing my memories of being back in my home state of Arizona—on foot trudging through the desert under dark, threatening thunderclouds that do not diminish the hottest day I have ever felt in my entire life. Through an unexpected break in the storm clouds, I see bright white sunlight and the most magnificent color of blue sky. Up there above me a haunting full moon commands my attention.

Sticking out of the landscape under the ominous skies is a mechanical structure apparently made mostly of wood. As I walk closer to the device, it looks to me as though it was created specifically to slow down the process of hanging a man by the neck so that he will experience extended agony before his death.

Hung from a thick brown rope wrapped around a wheel wench is a muscular, shirtless, and barefoot man with his arms unbound struggling desperately to stay conscious as his neck is crushed in the noose. I see his high cheekbones and long dark brown hair that is tied behind his neck into a queue. I watch his bare feet kick the sky.

I notice a pair of unattended video cameras on tripods positioned nearby on the desert floor pointing toward the hanging machine. Why would anyone go to the trouble of videotaping this man’s death by ritual hanging?

I know that I have met him previously. But this man whose name I cannot remember somehow seems to hold a distinct place at the very center of faulty recollections in my brain.

Off in the distance fifty meters or so to the west of my location, I can see four men wearing cowboy attire running away. I must have scared them away when I approached. But they left that helpless man to die on their hanging machine.

He is someone who seems obviously capable of having put up very considerable resistance against this merciless fate. His powerful body attracts my full attention. He looks like he is about thirty years old—the same age as me. His legs wildly swing in all possible directions as I reach the hanging machine. He desperately tries to reach his hands up to his neck as if it somehow were possible to free himself from the noose. But that is impossible! He groans when he sees me as if to try and tell me something.

His faded blue jeans are too tight for him. I stare at his bulging crotch as he dances in the air at the end of a rope. I marvel at his incredible masculinity contrasted with utter vulnerability. This man looks strong and tough. He must certainly be capable of protecting himself against anyone with success. But, not now.

He cannot save himself. He is simultaneously very manly and totally defenseless. This precise opposing combination of traits is, I’m sure, why men watch executions of other men.

His deep, dark eyes remain open, defiantly staring outward into the eerie sky. He resumes his kicking, but much more forcefully now.

His tight blue jeans emphasize his growing bulge. He has attained a full erection ahead of what will be his final ejaculation into his jeans. There is intense humiliation on his face. His body jerks wildly. As he shoots his last load in his pants, his neck cannot withstand the crushing force of the noose. I am stunned because I did not expect to see his body spasms, kicking, and curling of his toes.

Very suddenly, he just stops struggling. His body no longer can fight back against the effects of gravity and the noose that has applied fatal pressure to his vulnerable neck. I watch him desperately try to open his mouth to breathe, but he has no life remaining in him. I am overwhelmed with intense anger and shock as I slump to the ground. I cry without any shame for this stranger. I feel stunned by my sexual attraction to him. It is as if I have lost someone who has been very significant to me and to my life.

Even though I feel instinctively that I have suffered memory loss, I can remember where I work. I especially remember being inside some kind of cylindrical blue machine.

The inside of the circular blue glass machine was filled with a milky white liquid. It was translucent and unpleasant. It smelled like chemicals. I was naked. I felt like I was drowning. But I knew I was not going to drown. Something has taught me that I cannot die. I know with absolute certainty that I do not know death. I live on and on. But, I have so many questions that I cannot answer. Why am I repeatedly resurrected? Will I live forever? Madeira Desouza us a gay male author. He focuses upon telling stories about mature, masculine men who are sexually attracted to other mature, masculine men. He steers clear of several deeply embedded traits of American gay culture that can be found in film and in print–eccentric or flamboyant behaviors, alkyl nitrites, dance music, trendy clothing, trendy hair, gay men who think age 30 is old, and so forth.

Desouza’s creative works belong within the bara genre. This little word is shortened from barazuko. Translated from Japanese, it means rose-tribe, which is a code phrase for gay men. Originated in Japan decades ago as gay men created works for other gay men, this genre has not yet been widely embraced internationally. Perhaps this is because bara bara depicts same-sex feelings and sexual attraction to masculine, muscular men who sometimes behave in aggressive, violent, or exploitative ways towards one another.

As both a storyteller and digital artist Desouza explores conflicting and opposing compulsions that all men have. On one side there are impulses men have towards sustaining life, engaging in love, and being attracted to others. In the opposing direction are impulses men have towards being aggressive, engaging in violence, and, causing pain and death. For centuries, artists and storytellers around the world have found inspiration in these two opposing human compulsions that no man is able to resist or impede merely by his conscious will alone.