Hi guys! We have Clare London stopping by today with her new release Between A Rock and A Hard Place, we have a great excerpt and a brilliant giveaway, so check out the post and enter the giveaway! <3 ~Pixie~ 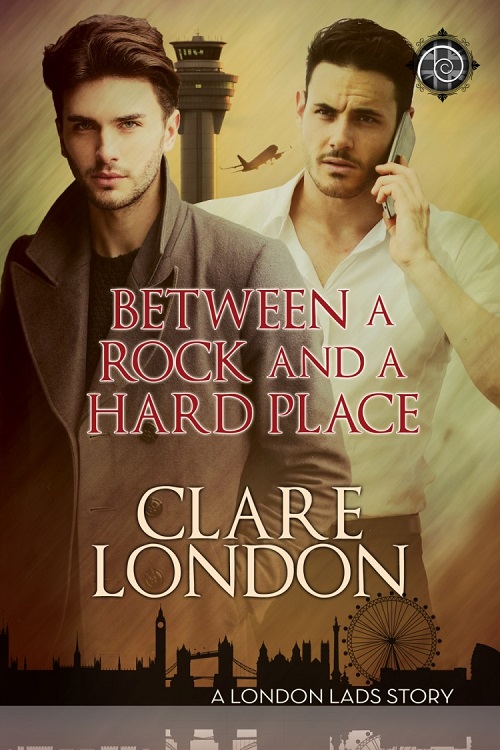 Between A Rock and A Hard Place

Garry’s at the end of his tether. He’s waiting at Glasgow Airport to meet his friend Will, on their way to a holiday in a Scottish Highlands hotel. Now there’s a ten-hour delay to incoming flights, the seat in the lounge is more like an instrument of torture, and he’s beyond tired of airport food.

He’s also dreading having to apologise for the pass he recently made at Will, his colleague at a London bank, under the influence of too many beers and a long-held crush. Now Will’s been offered a new job offer on a continent thousands of miles away, Garry realises it may be the end of their close friendship—let alone anything more.

To add to Garry’s stress, he’s treated to the company of Emily and Max, two young people who think he needs educating in the ways of the world. Struggling with their well-meaning help and the startling mess from spilled ketchup and noxious-smelling sweets, he’s encouraged to re-examine how he feels about Will and to decide what kind of journey he’d really like them to take together.

Garry suspected he knew what tipped psychotics over the edge.

It wasn’t childhood trauma or thwarted world domination. Far from it! It was the agony of a plastic bucket chair digging into the back of your legs in the middle of a chaotic Arrivals lounge. Add to that the robotic monotone of the Glasgow Airport PA system offering “apologies for the inconvenience caused to those customers awaiting incoming flights from the USA,” and it was like salt rubbed into a wound.

He slumped back in the seat, his arms folded tightly across his chest. He could feel the scowl on his face etching into the muscles. There was noise everywhere—booming announcements over the speakers and the incomprehensible swell of people’s excited chatter. Kids shrieked, and suitcases rattled over the threadbare carpet. Rolling neon signs flashed up reminders to boarding gates, constant alerts to keep your bags beside you at all times, and then—almost as an afterthought—the price of the latest, must-have mobile phone package.

Airport lounges had to be one of the least comfortable places on earth. He hunched down farther, trying to nap. Like it’d be possible in this maelstrom. Bad mood, or what? He’d been up since the crack of dawn, maybe even before. He couldn’t exactly remember the time, as over the years he’d found that lack of sleep caused him, one, serious memory problems, two, to leave the house in an unmatched pair of socks, and, three, the unmitigated loss of his sense of humour.

He was jolted back to attention as a man hauling a heavy suitcase let it run over Garry’s feet. With a cry of pain, Garry wrenched his long legs back under his seat, but not before the wheels had left neat little tramlines over his boots. His toes felt bruised, and his mood teetered further toward homicidal. Luckily the perpetrator had taken a sharp left and vanished into the direction of the car hire franchises, else his suitcase—and probably his limbs—might have been scattered to the four winds.

Garry winced. So much for keeping your luggage with you at all times.

So… what was currently on his agenda? A too-early start; a wickedly uncomfortable waiting area; a psychotic bunch of fellow passengers. The bad omens were already stacking up. He’d arrived at Glasgow Airport rather travel-worn from his own flight from London Heathrow, preparing to meet up with his friend Will somewhere in amongst this mess of humanity.

Then he’d been greeted with the worst of news—a delay.

Ten hours? He felt like shouting it aloud, as in fact a few of the less self-disciplined airport visitors already had. What do they mean, incoming flights to Glasgow delayed ten fucking hours? He’d stumbled onto his own flight at some godforsaken hour of the morning to get to Scotland on time, only to find the connecting transatlantic airlines couldn’t meet the same punctuality. Ten hours! It was only late morning. Ten hours would take him on into the evening and a large part of the night. Ten hours of sitting on this seat, with nothing but overpriced airport snacks and the metallic xylophone tones of the airport announcer for company.

Okay, so yes, obviously, he was in a less than good mood.

But he had nowhere else to wait for Will. He couldn’t travel on to the Scottish hotel their mutual friend Allen had booked, because he didn’t know which one it was. Allen didn’t seem to be answering his mobile at the moment. Garry had tried seven times already, ever since the first announcements were made about the delay. And Garry knew that was the only number available, not just because Allen could be such a bloody control freak, but because Leonard—Allen’s husband—never even turned his phone on when he was travelling anywhere. Nor would Will be accessible, circling somewhere in the sky between the States and here. And if Garry left the airport to go anywhere else, he ran the risk of missing Will’s flight altogether. No, he knew he was effectively trapped between the proverbial rock and the hard place. In fact, he could feel the hard place biting into his arse right now, as he tried to get comfortable in his seat for the hundredth time.

Besides, what could he do but wait? He was here because his friend Will had specifically asked him to be.

His best friend, Will.

They were both flying in to Glasgow, ready to meet the rest of the gang. It was a long-held tradition, an annual holiday together in June, whatever their commitments for the rest of the year. Friends since university, there were around eight of them on any year’s trip, depending on who could get away from work. Allen was the self-appointed “manager” of it all, and this year he’d suggested they visit the Scottish Highlands, his own home turf. Garry had happily booked the time off, like he always did. He rarely had other plans that might conflict.

Allen always waxed lyrical about Scotland. Most of his multitudinous family had left the home country over the years, moving all over the world, making what sounded like starry marriages with entrepreneurs and lawyers. Even a Hollywood movie star in one case. But Allen had stayed, happy to find everything he needed right there—including the man he met and moved in with, several years ago. He and Leonard often made the trip north to the Highlands on their own. The hotel they stayed in had a fabulous view over Loch Lomond, and the highest star-ratings for food and comfort. And, this year, Allen and Leonard wanted to share it with their friends as well.

Everyone thought it was a great choice, including Will and Garry. Will in particular had always wanted to see more of Scotland. They both lived in London and spent a lot of their social time together, so they usually travelled the same route to the reunion holiday. This year, they’d arranged to fly to Glasgow, hire a car, then drive the rest of the way.

At least, that had been the original plan.

But the plans had changed, hadn’t they?

How The Other Half Lives (Book #2) Clare London took her pen name from the city where she lives, loves, and writes. A lone, brave female in a frenetic, testosterone-fuelled family home, she juggles her writing with her other day job as an accountant.

Clare currently has several novels sulking at that tricky chapter three stage and plenty of other projects in mind… she just has to find out where she left them in that frenetic, testosterone-fuelled family home.

Clare loves to hear from readers, and you can contact her here: