Hi peeps! We have Kim Fielding stopping by today with her upcoming release Blyd and Pearce, we have a brilliant guest post from Kim, a great excerpt, and a fantastic giveaway where there’s two audiobooks and a £10 Dreamspinner GC up for grabs, so guys, check out the post and enter the giveaway! ❤ ~Pixie~ 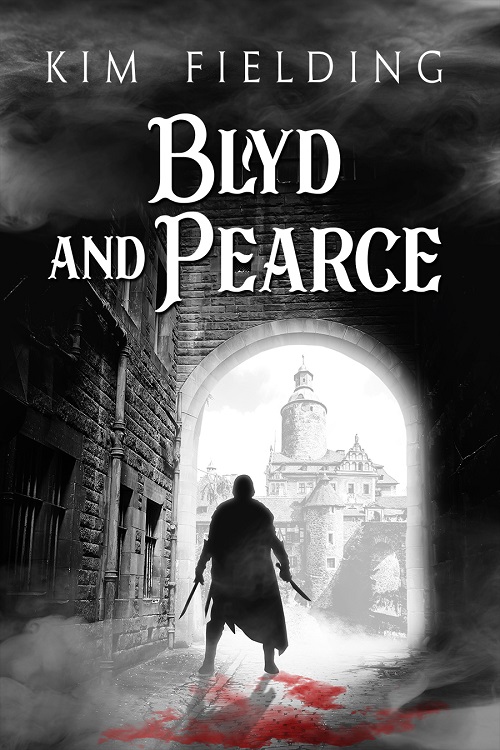 Born into poverty and orphaned young, Daveth Blyd had one chance for success when his fighting prowess earned him a place in the Tangye city guard—a place he lost to false accusations of theft. Now he scrapes out a living searching for wayward spouses and missing children. When a nobleman offers him a small fortune to find an entertainer who’s stolen a ring, Daveth takes the case.

While Jory Pearce may or may not be a thief, he certainly can’t be trusted. But, enchanted by Jory’s beauty and haunting voice, Daveth soon finds himself caught in the middle of a conspiracy. As he searches desperately for answers, he realizes that he’s also falling for Jory. The two men face river wraiths, assassins, a necromancer, and a talking head that could be Daveth’s salvation on their quest for the truth. But with everyone’s integrity in question and Death eager to dance, Daveth will need more than sorcery to survive.

Hi! Kim Fielding here, and I’m so excited to be sharing my newest release—my 21st novel!—with you. Blyd and Pearce is a fusion of some of my favorite genres: m/m romance, medieval fantasy, and noir private eye. I hope you enjoy reading it as much as I enjoyed writing it.

Are you a fan of noir film or fiction? Obviously, I am. If you’re unfamiliar with the genre, it involves crime dramas. It’s related to hardboiled detective stories (think Philip Marlowe, Sam Spade, Mike Hammer), except in noir, the protagonist is generally personally involved in the crime in some way rather than simply investigating it. In these worlds, the protagonist is a cynical antihero, the system is corrupt, and we’re treated to the seedy sides of both the setting and human nature.

American noir fiction first arose in the late 1920s and early 1930s, maybe as a result of the Great Depression’s gloom. However, it became more popular in the 1950s. I wonder if this was partially a response to the era’s strong conformist pressures. Noir heroes are nonconformists—they’ve seen how crooked the authorities are, and now they’re just out to protect themselves. Except they also tend to operate under an internal code of honor, which means they may end up protecting others who are wronged. I believe WWII also contributed to noir’s popularity, in that it lent a sense of fatality and a recognition of the depths of human evil.

Film noir developed along a parallel but not identical route, reaching a peak in the 1940s. It was heavily influenced by the filming style known as Expressionism. Originally shot in black and white, its settings were dark (noir, in French) and gritty, with lots of shadows and maybe smoke or fog thrown in for good measure. As in noir literature, our protagonists here are antiheroes, often with moral ambiguity.

Although there’s variation within the genre, a number of other tropes are common. Urban settings. Convoluted plots. A femme fatale (my story has an homme fatal instead). A sense of alienation and pessimism. Lots of drinking and smoking.

I think noir might have hit its peak some decades ago, but it continues to show up regularly in film and print. LA Confidential and Fargo are a couple of my more recent favorites.

One fun thing about noir is that it can blend really nicely with speculative fiction and other genres. And that’s what I’ve done with Blyd and Pearce. Our hero is a private detective who’s been done wrong by society and the legal system, and whose life is about to get a whole lot more complicated. But instead of Los Angeles or Chicago—two common noir settings—this book takes place in a medieval fantasy setting, in a city called Tangye, where magic is as real as corrupt politicians.

Do you have a favorite noir movie or book? Please comment below! And make sure to enter the Rafflecopter too. The narrow stairway rose steeply, each step creaking under our feet and taking us into increasing darkness. I smelled onions and fish—a bit strong, but better than my apartment’s odors—and blindly held on to the banister. It occurred to me that Pearce was in a good position to attack me, since I’d have trouble defending myself in the blackness of unfamiliar territory. But I wasn’t afraid of him. Maybe some of his enchantment lingered.

We climbed four flights to the top floor, where he unlocked another door. A few scattered spiritlights flared to life at once, but he lit two lanterns as well.

It wasn’t a large apartment, and the roof angled steeply on both sides so that he had to stoop a little when he hung his lute and midnight-colored cloak on a hook. Bright fabrics adorned the walls—silks and embroidered cottons—and a thick mat and pile of pillows were heaped in one corner. Rag rugs and pillows for seating covered the wide floorboards. The apartment held little else other than a dry sink, a few shelves, a little stand with a chamber pot, a painted wardrobe. But it was a cozy space, and two pottery vases of flowers squatted on the windowsill.

“Do you want some wine?” he asked.

He took a green glass bottle from the shelf, pulled the cork, and poured a red liquid into a pair of plain clay cups.

He was no longer wearing the gauzy silks he’d performed in, but his current outfit was hardly understated. Embroidered snakes—matching the bright blue of his chausses—trimmed a sunshine-hued tunic, and instead of sensible boots, he wore scarlet stockings and yellow slippers with curled, pointed toes. On another man, the clothing would have been gaudy, but it suited him well.

I remained near the closed door. With a tiny quirk to his lips, he prowled closer. He held out one cup of wine, which I took, and when I hesitated to drink, he took a dainty sip of his own. “It’s mediocre, I’m afraid.”

Not being able to distinguish good wine from bad, I swallowed a mouthful. It tasted fine to me.

“What shall I call you?” he purred, standing quite close. He was older than I’d thought, but the fine lines at the corners of his eyes didn’t make him any less beautiful.

He wore a scent—something spicy and warm—that made my head swim. And his voice….

When I was newly signed on as a city guard, my duties had included carting my captain’s soiled uniforms to the laundry. It wasn’t one of my favored tasks. But she’d been a showy woman and had her capes trimmed not with dyed wool but with velvet. I’d rarely felt anything so soft, and I used to give the velvet surreptitious little pets as I carried her clothes.

Jory Pearce’s voice was like that velvet: soft and rich and plush. And, I reminded myself, expensive.