Hi guys! We have Gretchen Evans stopping by today with her new release Bumper to Bumper, we have a great excerpt and a brilliant $10 NineStar GC giveaway so check out the post and enter the giveaway! ❤️ ~Pixie~ 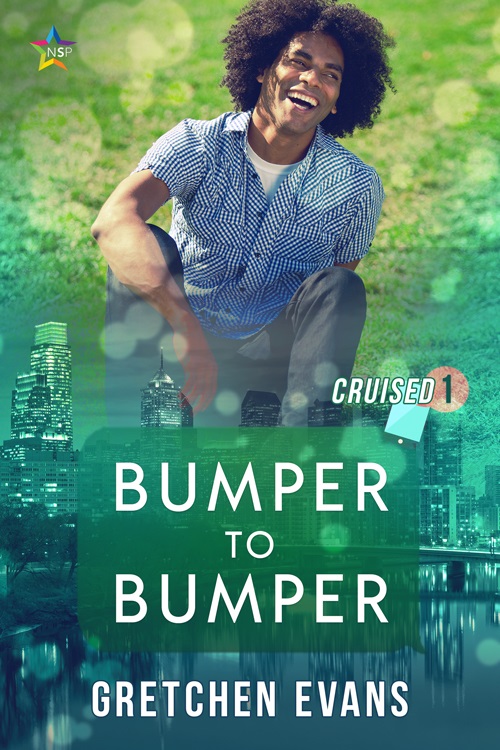 Gabe is bored with hookup culture. He’s in his thirties and wants something more stable. But sitting in traffic is even more boring. He expects more of the same tired, headless torsos when he swipes open Cruised, the most popular hookup app for men, during his morning commute. Instead, he meets Mark.

Mark is handsome, funny, and interested in conversation. He’s also interested in meeting Gabe in coffee shop bathrooms for quickies on the way to work. Mark doesn’t rush out of the room after sex either. He’s tender and sweet, and way more than Gabe had hoped for. The sex is hot, but the connection between Gabe and Mark is something deeper.

Gabe knows nothing about Mark’s life or how to negotiate a hookup into something more. Does Mark want something more, or is he already taken?

Gabe’s car lurched as he stomped on the brake. His bumper stopped inches from the expensive-looking sedan in front of him. He was going to be late. Again. He groaned and let his forehead rest on the steering wheel.

The traffic on I-40 was terrible. Every day it seemed to get worse. It was also unpredictable. Some days, his twelve-mile commute to the office took fifteen minutes. Other days, it took forty-five. It was impossible to tell which it would be before hitting the on-ramp.

At least he wasn’t the only one suffering like this. He spent so much time sitting in traffic during morning rush hour that he recognized a lot of the cars around him. It was a strange camaraderie. There was the middle-aged lady in the tiny hatchback whose hair color changed every week. The old hippy in a political-bumper-sticker-covered hybrid always rode in the left lane, even when traffic cleared up. The white luxury SUV driven by the angry twentysomething blonde only showed up some days, but she had passed him on the shoulder first thing this morning. He did his best to ignore the giant red truck with gun and Confederate flag stickers that always cut in front of him.

He moved ahead a few feet but stopped almost immediately. The car behind him swerved onto the shoulder to avoid rear-ending him. If someone hit him, he’d at least have a good excuse to give to his boss. But there was no way his twenty-year-old, hand-me-down car would survive.

Gabe gave up dreams of getting into a minor fender bender and inched ahead again. There must have already been an accident up ahead. Traffic was always slow, but it wasn’t usually this bad.

Sure enough, a fire truck and police car zoomed past on the shoulder. Great.

He picked up his phone to text his work wife he’d be late. He’d done that a lot lately, so she was a pro at covering for him. Maggie was great to have around but definitely the only type of wife he was ever going to have. She dodged traffic by taking backroads to the office, so Gabe didn’t feel too bad getting her to cover his ass. Her idyllic suburban lifestyle could support his terrible commute.

Maybe Miss Impatient in the SUV was the cause of whatever had them all trapped here. Gabe was annoyed enough to smile at that uncharitable thought.

Text sent, and he was still sitting at a dead stop. There was no harm in using your phone in the car if you weren’t actually driving, right? The highway was basically a parking lot right now.

Gabe tapped open Cruised, the hookup app he’d had the most luck with in the past.

Not that he’d had much luck. In quantity, sure, he’d had lots of luck. Gotten hella lucky. But in terms of quality? Nah. It was a desert of huge cocks with no brains attached out there. But, it couldn’t hurt to look. Looking was pretty much all he did these days, but it was nice to see some headless torsos and dick pics. Better than trying to figure out what the specialty license plate in the lane next to him meant.

He thumbed through profiles, most of which he’d seen before. It didn’t seem to matter if he was checking at home, work, or in the club, it was always a collection of the same tired old faces. Or not-faces. As frustrating and predictable as morning traffic. He glanced away from his phone to cover a few feet of space left open by a car switching to a moving lane. Why was the lane next to him always moving?

His phone buzzed in his hand—a surprise. No one ever messaged him first. Well, some guys did but no one he wanted to respond to. The message wasn’t from a name he recognized either.

That had promise. He swiped the message open.

That had…less promise. But at least it wasn’t a dick pic right away. And he’d managed to spell out “hello.”

Hi, Gabe tapped out as he crawled forward. He kept one eye on his phone and the other on the bumper in front of him.

The response came back immediately. Maybe everything seemed instantaneous when Gabe was traveling along at less than five miles an hour.

Your pictures make you look attractive.

Was that a neg? thats bc i am attractive

Damn right Gabe’s pictures made him look attractive. He’d spent a long time taking the perfect selfie to highlight his dark eyes and scoured through old text messages to find a shot of him at the beach to show off how his light-brown skin shone in the sun. It helped that the clearly defined abs he’d once had were on display too. Gabe tapped over to his mystery man’s profile but didn’t find anything other than the stranger’s picture. No preferences, or kinks, or anything.

Even his picture was just his head and shoulders, turned slightly away from the camera but not fully in profile. And with the sun shining directly behind him so everything was in shadow. The only things easily seen were the outline of his jaw and the clean-cut lines of his hair, but that was it. Very artistic, but not very illuminating.

A little snide, perhaps, but these conversations never went anywhere. SilverFoxxx would eventually ask for a dick pic, Gabe would say no, and that would be the end of it. Or he would skip straight to asking to meet up for a fuck. Gabe might say yes, but he always ended up disappointed.

He was reaching the point where meaningless hookups weren’t doing it for him anymore. Even if the sex was good, it left him strangely listless afterward.

Maggie would say that was what happened when you turned thirty, and Gabe would tell her to take her soccer mom ass back to the suburbs and shut up about it.

That didn’t mean she was wrong, though.

Was this guy a robot? Who said stuff like that? Who texted in full sentences?

Traffic started to clear a bit, and Gabe was able to get up to nearly twenty miles an hour. It was exhilarating but short-lived. They slowed back to a crawl less than a quarter mile later. He was going to be very late.

With his foot firmly on the brake and nothing else to do, Gabe turned back to his phone. SilverFoxxx’s last message continued to glow up at him. It was too tempting to ignore.

He should have spelled out you. SilverFoxxx probably thought he was an idiot. Ordinarily, Gabe didn’t care about stuff like that, especially from randos on Cruised, but this time, he was anxious. He stared at his phone until the car behind him laid on the horn.

Gabe crawled two car lengths forward but stopped again. Lights flashed on the left shoulder ahead of him. Hopefully, traffic would clear after this accident, and he could get to work.

The vibration of his phone in his hand sent a little thrill down his spine. Traffic was trickling forward, so Gabe glanced back and forth between his phone and the road.

But it’s convenient. What are you here for?

Gabe wasn’t sure what to say. He could be flirty. Or more than flirty and jump to the next predictable step. Or he could be honest.

not sure. mostly bored in traffic

Didn’t anyone ever tell you not to text and drive?

There was no hint of tone, but Gabe smiled anyway. Deep, rich, and sardonic—this guy’s voice was already in his head. So Gabe’s type. Obviously, he wasn’t stretching. Not at all. SilverFoxxx sounded like he was teasing.

I bet you are.

Gabe’s grin grew wider. This was fun. No gross comments or pushy requests yet. It was like SilverFoxxx could actually hold a conversation.

His phone buzzed again before he was able to think of a response.

Traffic is clearing up.

Gabe checked the location information. It seemed like SilverFoxxx was closer than he’d been before.

are u texting and driving too?

Gabe skidded all the way into the work parking lot looking for a response that never came. Gretchen Evans is a bisexual, cis woman living with her partner in North Carolina. Her day job involves figuring out the best way to ask people questions they don’t want to answer. In the evenings, she does hot yoga and watches any TV show that can be read as queer-coded. She only drinks beer disguised as root beer and her perfect Sunday involves half listening to an NFL game as she reads a book. She plans to continue writing queer romance with engaging characters, sexy times, and feelings. You can find Gretchen on Twitter.