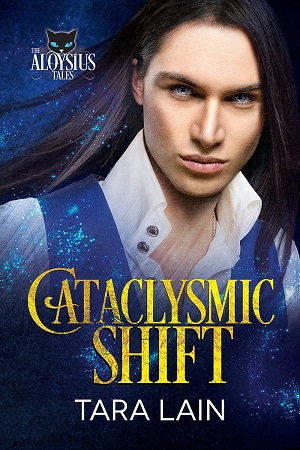 Blurb: Aloysius, the magical black cat and powerful witch’s familiar, isn’t afraid to go into battle to protect his master, but the outcome of the fight turns his feline world upside down. A direct hit of magic steals not only his memories and power, but even the body he’s lived in for several centuries. When he wakes up naked on the floor of a veterinarian’s office, it isn’t as the cat Aloysius, but as the sixteenth-century French gentleman Alain Bellarose. And when Alain sees sexy and enigmatic veterinarian Luke Elliott, he decides he’ll make the best of his time as a human.

Luke is a man with secrets who generally prefers the company of animals—though the flamboyant boy who washes his face with the side of his hand and tries to lick his own privates might prove an exception.

Meanwhile, Witch Master Killian Barth and his secret weapon, Sammy, struggle without Aloysius’s power to draw on. Two evil females are circling, and seeing the coven’s weakness, they’re about to move in for the kill. When Alain’s memories return, he’s faced with the ultimate dilemma: protect his community or stay with the man he loves.

Review: Aloysius is a beautiful and very powerful familiar to an amazing witch. He would do everything to protect those he loves. Then a evil witch’s hit knocked him out. Killian and Blaine rush him to a nearby vet only to loose him. Well I wouldn’t say he was lost, he was hiding in the closet. Not only was he hiding but he was also human and had no clue to who he was. However there were instances where he felt like he would. The good news is the vet was one hell of a sexy man.

Luke had grown up with a mother who thought she was a witch but of course no young man would believe. He was about to get his eyes opened wide for he has found himself falling in love with a man who had also been a cat.

With the man looking for Luke and the two witches going for the coven, it would seem that they were in need to have the cat back. This story has one hell of a twist to it. Aloysius as a cat and Alain as a human, he has no memory of his past. However his past is quite unique as it is. And Luke doesn’t want to remember his own past. Alain has fallen in love with Luke but by staying human it could cost Killian and his coven their lives. Hard to figure out which way to go.

Excitement, danger, sexy times, magic and great friends are just a hint of what comes in this story. It is an amazing journey and I can’t wait to read the next book. It gave me everything I could want in a story and so much more.