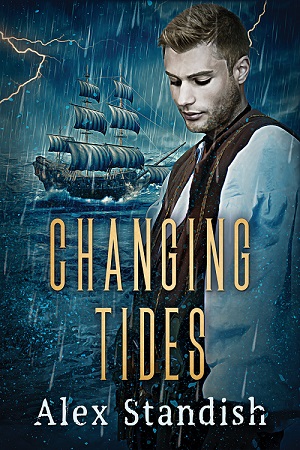 Blurb: While most pirates sail in search of riches, Captain Devon Hall, the infamous Phantom of the Caribbean, is driven by vengeance. Devon has sworn to put an end to the corrupt governor of Jamaica and break the ruthless man’s stranglehold in the Caribbean.

When Devon is wounded and stranded on land, an unlikely rescuer comes to his aid. Brett Campbell is nothing like his uncle, the governor, and his goals are not so different from Devon’s. Brett longs for freedom, but his obligations to protect those under his uncle’s control keep him from fleeing. Throwing in with Devon might increase both their chances of success—and survival.

When the governor’s attempts to destroy Devon escalate and place Brett in danger and in the hands of the ruthless and depraved pirate Captain Blackburn, Devon must risk everything to save the man he loves and repay his enemies.

All Devon’s ever wanted is his ship, his freedom, friends who stand by his side through thick and thin, and someone to love. But facing dangers at sea and on land, Devon wonders if they will live to enjoy it all.

Review: An adventure for whats right, love and to do away with an evil governor. Captain Devon Hall takes to the seas in this swashbuckling tale of vengeance. I loved Devon as he had the right idea. It was dangerous and mystery filled.

When Brett comes into the picture Devon rethink his priorities to include Brett. I loved these two together even though it was intense at times. Great action scenes and settings that made me feel as though I was actually there witnessing all that was happening.