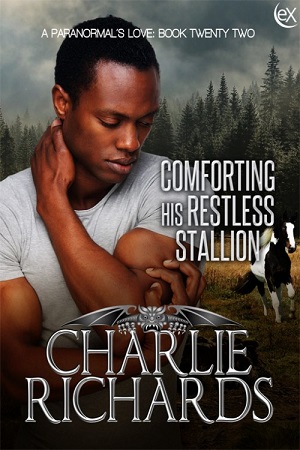 Blurb: Into the Paranormal World: While regaining his strength, a horse shifter must accept the inevitability of change in order to dream of a brighter future.

Baron and his friend plan a coup, staged in hopes of a better future, but it all goes horribly wrong. He is caught, and his friend is killed. When Baron refuses to rat out his buddy’s wife and daughter’s location, he’s tortured for his silence. Left hanging in his chains for several days, Baron expects death. Instead, he’s rescued by a stranger who assures him that his friend’s loved ones are well. Baron asks to be taken to them and ends up at the estate of a gargoyle clutch. Baron’s surprise is compounded when Conchlin walks in with an evening meal…and Baron recognizes the small, bright-orange gargoyle as his mate. While Baron wants the man, he doesn’t think he can give Conchlin everything he needs to complete their bond. Before Baron even has a chance to heal and find out, Conchlin’s past comes back to haunt him, putting their mating in jeopardy. Baron realizes it’s not all about him. Will standing beside Conchlin and supporting him through adversity be enough for them to find their future together?

Review: Each book in A Paranormal’s Love collection features a new romantic couple. To enjoy the overall story arc and crossover characters, I would recommend reading the series in sequential order. This story is a branch off of Wolves of Stone Ridge, so I would start with that series first. There are several series that are connected to this series as well.

I came across this author when her first book in the Wolves of Stone Ridge series came out and from that point on I knew that she would become a favorite. The worlds she creates are unique and keep my attention from the moment I start reading. The characters are sexy, fierce, tempting and will fight for what they believe is right. The stories are fascinating and give the reader everything they could ask for in a story. Heat, danger, excitement and a bit of adventure are just a few things you get in these stories.

Baron had made it to being the second of his herd, but then he was found out. He had helped his best friends family escape when his friend had been killed. His alpha was a sadistic asshat that loved to give pain. If it wasn’t for a council Internal affairs investigator, he would probably have been dead soon. Brought to the clutch where Nolan and the others were at, he had a major shock. It would seem the sexy orange gargoyle was his mate.

Conchlin was training to be a medic and was pretty good at it. His first patient turned out to be his mate and that he had not expected. Then his father and brother show up and they bring trouble with them.

I have always loved Charlie’s books and this was just another amazing story. It gave me everything I could want in a story and so much more. I had a lot of fun reading it and can’t wait to get my hands on the next book. This is one of those stories that will be read more than once.