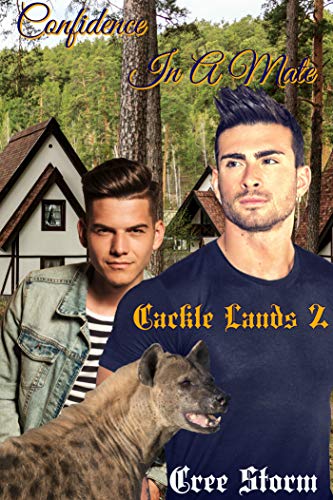 Title: Confidence in a Mate

Blurb: Cal wanted to rescue his parents, however when he discovers everyone from the leader of his Cackle to his brother and even his own mate were plotting to leave without him he feels beyond hurt…he feels betrayed and leaving is the only answer.

Jackson is devastated. He can’t eat. He can’t drink. He can’t sleep. His mate is gone and he isn’t any good to anyone. Discovering his mate is living with the Cackle next to his own sparks a life in him he had not had before. He knows he cannot go onto those lands without express permission by their leader but there is no time. He had to get to Cal and beg his mate for forgiveness. He had to put his life on the line. Cal was his and Jackson intended to bring him home or die trying.

Review: Each book in the Crackle Lands collection features a new romantic couple. To enjoy the overall story arc and crossover characters, I would recommend reading the series in sequential order.

Cal wants to rescue his parents but it would seem that not only does his mate but his crackle wants him to stay out of it. Even though he knows how to get in nobody is listening to him. So he does the only thing he could think of, he ran away.

Jackson knew that what they had planned had been wrong but he just wanted to protect his little mate. Now here he was mateless and going down hill. Now you can guess what he plans to do, but what he finds is a bit more crazy. Things are going to not only heat up real fast but its going to get crazy.

Betrayal, action packed, danger filled and lets not forget some hot sexy times are a bit of what you get in this book. It will keep your attention throughout the whole story. This story is unique and a very fresh new type of book. It is even paced that will make for a good story. I loved the characters and their story. It gave me almost everything I could ask for in a story and so much more.

Cree Storm has became a favorite author of mine and I can tell you that she has become an automatic buy for me. I get a kick out of the characters and their attitudes. I had a blast reading this and can’t wait to get my hands on the next book.