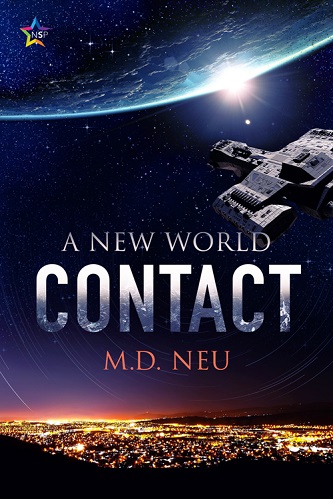 Blurb: A little blue world, the third planet from the sun. It’s home to seven billion people—with all manner of faiths, beliefs, and customs, divided by bigotry and misunderstanding—who will soon be told they are not alone in the universe. Anyone watching from the outside would pass by this fractured and tumultuous world, unless they had no other choice. Todd Landon is one of these people, living and working in a section of the world called the United States of America. His life is similar to those around him: home, family, work, friends, and a husband.

On the cusp of the greatest announcement humankind has ever witnessed, Todd’s personal world is thrown into turmoil when his estranged brother shows up on his front porch with news of ships heading for Earth’s orbit. The ships are holding the Nentraee, a humanoid race who have come to Earth in need of help after fleeing the destruction of their homeworld. How will one man bridge the gap for both the Humans and Nentraee, amongst mistrust, terrorist attacks, and personal loss? Will this be the start of a new age of man or will bigotry and miscommunication bring this small world to its knees and final end?

Review: This story is about what might happen if aliens came to earth looking for a new home. Todd the MC was a bit in the clouds until the aliens come. I liked the relationship between Jerry and him but felt there was no real romance. Brad, Todd’s brother got on my nerves at first with his hurtful comments but changes his tune.

I wanted to love this story but it fell kinda flat for me. The aliens were the normal aliens looking for a new home after theirs was destroyed. I liked Todd and the rest of the characters but for me they were just words on a screen and I never connected with any of them for some reason.

It was an interesting take on how humans would react to aliens coming to earth and all the emotions that would entail. I am looking forward to the next book as this one seemed more in line with an introduction to the series.