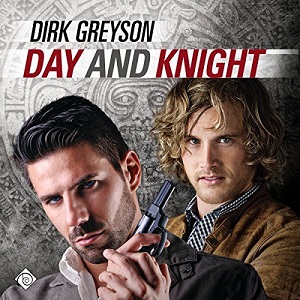 Blurb: As former NSA, Dayton “Day” Ingram has national security chops and now works as a technical analyst for Scorpion. He longs for fieldwork and scuttling an attack gives him his chance. He’s smart, multilingual, and a technological wizard. But his opportunity comes with a hitch. His partner, Knighton, “Knight”, is a real mystery. Despite countless hours of research, Day can find nothing on the agent including his first name.

A former Marine, Knight crawled into a bottle after losing his family. After drying out, he’s offered one last chance: along with Day, to stop a terrorist threat from the Yucatan. To get there without drawing suspicion, Day and Knight board a gay cruise, where the deeply closeted Day and equally closeted Knight must pose as a couple. Tensions run high as Knight communicates very little, and Day bristles at Knight’s heavy-handed need for control.

But after drinking too much, Day and Knight wake up in bed together. As they near their destination, they must infiltrate the terrorist camp and neutralize a plot aimed at America’s technological infrastructure. If they hope to have a life after the mission, one that might include each other, they must learn to trust and rely on each other.

I do like a good suspense, but I have to admit that my only reservations for this book is the fact that it looks like an ongoing saga between the two. I’m not normally one for big epic sagas in my MM romances – I usually save that for my science-fiction and historical fantasies.

Nonetheless, this was a enjoyable book, although I feel that this is one of the types of books that I wouldn’t enjoy much reading as I did enjoy the audio narration. Andrew McFerrin is a wonderful narrator, and his tone and pace were absolutely on point for this.

The story is set in a spy agency called Scorpion, where Dayton Ingram, aka Day, wants nothing more than a chance to prove himself as a field agent. As it is he is a wicked technical analyst. Finally his chance has come and he is teamed up with Knighton, aka Knight. Knight is a true mystery, he was a former marine who subsequently became an alcoholic after the death of his family. Now that he has managed to become sober his boss has offered Knight one more chance to hold himself together in the field and get his job done. The problem is that Knight is not so good at communication, which frustrates Day to no end.

The two men are working a terrorist case in the Yucatan. They go undercover as a couple on a gay cruise. Which is all well good except for the fact they are both so deep in the closet that they are probably closer to Narnia than they are to accepting their individual sexualities.

The set up is good and the two have a complex chemistry. I’m not sure if you could call it a love hate type of thing, so I’m just going to stick to this being a complex relationship. And this is why the story is ongoing – Knight in particular has some pretty major demons to face. In fact, it’s not a stretch to begin to think that perhaps a relationship with Day is not the best thing for Knight now. However, despite falling into bed with each other, they need solve their case.

You need to be a fan of suspense or mystery to really like this story. The romance, such as it is, take more of a back seat to the constant battling of personal demons and terrorism. This isn’t a fairytale ending by any means, and I’m moving onto book 2 next to see what happens to Day and Knight. Both guys are likable, but at the same time they both need to work on their communication. The sexual chemistry and the suspense created by the terrorism plot line makes this an enjoyable read.