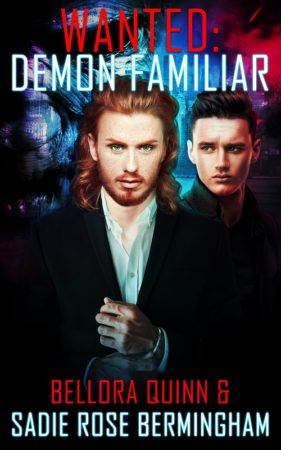 Blurb: Sometimes when you don’t know what you want, life gives you what you need.

When Neil Markovic witnesses the murder of his mother by Bone Men, his world is thrown into turmoil. On the run from the assassins that killed her, his sorcerer father and the police, Neil finds help in the form of a tall half-fae alchemist named Malachai. Mal seems more accepting than most of Neil’s demon bloodline but curiously immune to his charms.

Malachai Valentine, disgraced scion of a noble leprechaun clan, back in the Old Country, is happy living as an anonymous scrap dealer. Using his talent for alchemy to make fuel and potions, most days he doesn’t even think of his ruinous past. When a scared young man with a fancy car crashes into his life, at first, Mal thinks he can do without the hassle. But as Neil begins to get under his skin, Mal reassesses his hopes and ambitions.

Harassed by megalomaniac fae and stalked by sorcerous killers at every turn, Malachai and Neil must fight to be free, and to find what they both always wanted.

Review: After witnessing the death of hismother Niel is on the run. He has no clue who he can trust but when Mal is thrust into the picture he feels a connection and trusts the man to keep him safe. Mal has been happy with his existence. Meeting Niel has thrown a curve ball in his world but he does what he can for the man.

Trying to stay safe while at the same time trying to get a feel for each other Niel and Mal struggle.

It’s to be expected given the circumstances. I liked the story and the overall feel of it. The danger element was gripping. Mal and Niel’s backstory were gripping.

Although there were a few unanswered questions I still enjoyed the story. Mystery, suspense, danger and romance are in abundance in this book.