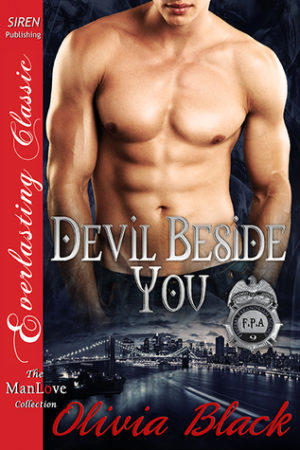 Title: Devil Beside You

Blurb: Ten years ago, Tae Young-Jin got himself entangled in the Red Ribbon Killer murder case, resulting in not only the death of his parents but also the loss of his memory. When he wakes from a six-month coma, Tae starts his life with a new identity. Now, years later, using the name David Choi, he returns to New York as a genius profiler.

David is recruited by Abram Jackman and becomes a trainee with the Federal Paranormal Agency. He balances FPA training with his own secret investigation into the Red Ribbon Killer. While working on the case, David tries to uncover the past and unlock his memories.

Eric Khang has secrets of his own. The vampire has been watching over David since the young man was a teenager living in New York. And now that David is back, Eric is trying to help the other man recover his memories.

Working together, the truth will be revealed. But, sometimes things are better left in the past.

I came across this author some time ago and absolutely fell in love with the worlds she creates. When I saw the name of the series for this particular story line, I knew it was what I wanted to read and probably needed. There is always sexy characters, interesting story, excitement, adventure and danger in these books. This story however was a bit different.

David was born Tae and his life was taken from him by a vicious killer. He came home to find his parents dead and then he was injured when he ran. A six month coma left him with out his memories but time will tell. Living with his guardian, he has spent a majority of his time researching serial killers, which keeps his mind on the past. Years have gone past and his past is coming back. He needs to know the truth, who killed his parents and why. He might just regret asking those questions.

Now he is recruited by the FPA and is sent in to find the killer. What he finds is not what he wanted. Eric is a medical examiner as well as a vampire. He has kept watch out for David, but there are some pretty wicked twists to this story that will change things.

Now for me the story is a bit rocky and doesn’t flow like it should have. Also the ending was way wrong, I am sorry but a killer is never reformed. To hold such a secret and for the amount of people involved would be impossible. The means to an end or in this case vigilante killings are just as twisted as those they go after.

I felt let down with this book, and sure do hope the rest don’t follow the same line.