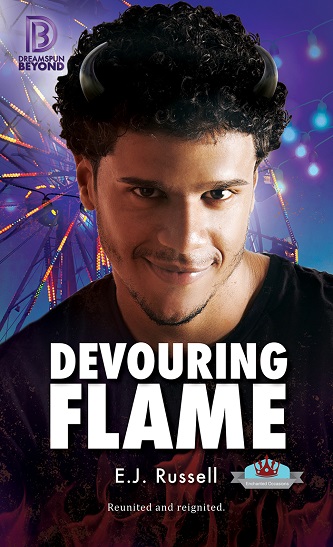 While cutting through the Interstices—the post-creation gap between realms—Smith, half-demon tech specialist for Enchanted Occasions Event Planning, spies the person he yearns for daily but dreads seeing again: the ifrit, Hashim of the Windrider clan.

On their one literally smoldering night together, Smith, stupidly besotted, revealed his true name—a demon’s greatest vulnerability. When Hashim didn’t return the favor, then split the next morning with no word? Message received, loud and clear: Thanks but no, thanks.

Although Hashim had burned to return Smith’s trust, it was impossible. The wizard who conjured him holds his true name in secret, and unless Hashim discovers it, he’ll never be free.

When their attraction sparks once more, the two unite to search for Hashim’s hidden name—which would be a hell of a lot easier if they didn’t have to contend with a convention full of food-crazed vampires on the one day out of the century they can consume something other than blood.

But if they fail, Hashim will be doomed to eternal slavery, and their reignited love will collapse in the ashes.

Luckily Smith is the guy who gets shit done. And Hashim is never afraid to heat things up.

Review: Devouring Flame is the second book in EJ Russell’s Enchanted Occasions series, which is also apart of the Dreamspun Beyond line. This works as a standalone book, as there is only a passing mention of one of the MCs from the previous book, but no mention of anything that had happened in Nudging Fate (Enchanted Occasions book 1).

Smith is half-demon, half-human (something that echoes from the first book with Anders). He is an event planner for Enchanted Occasions and while slipping between realms in Vegas (because of course the Sin City is basically the Hellmouth) he encounters the one being that he had dreamed of his happily ever after with. Hashim is an ifrit and despite knowing that Smith is the other half of his soul, he can’t give himself to the man that he felt such a strong connection to because he is a slave for a master that keeps Hashim’s true name from him. The catch is for demons, to be able to mate and bind their lives together, they need to exchange true names. While Smith is heartbroken because he has done so for Hashim, he does not realise the trouble that Hashim is in, and the evil wizard that is holding so many paranormals in their own personal hell.

Somehow, these guys have to conquer evil, find Hashim’s real name and somehow also work one of the major events of the century, where vampires hold a convention on the one day that they can consume real food. It’s a melting pot of drama, but Hashim will do anything to have Smith’s trust back, and Smith will do anything to help the man who holds his heart.

This is a good book for those that like a story where two people overcome a misunderstanding to finally find love again, because at the heart of it, that is the main theme of this book. It was fun and I found myself quickly invested in the lives of Smith and Hashim. The other workers of Enchanted Occasions are also quirky and I am hoping that we get to see some of those guys have their own HEA. I would also love to know more of the story of the cute minotaur Rion.