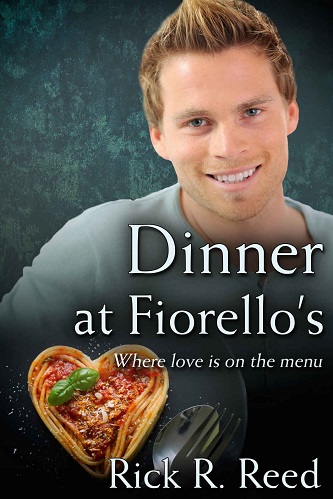 Series: A Romance With Recipes 02

Blurb: Henry Appleby has an appetite for life. As a recent high school graduate and the son of a wealthy family in one of Chicago’s affluent North Shore suburbs, his life is laid out for him. Unfortunately, though, he’s being forced to follow in the footsteps of his successful attorney father instead of living his dream of being a chef. When an opportunity comes his way to work in a real kitchen the summer after graduation, at a little Italian joint called Fiorello’s, Henry jumps at the chance, putting his future in jeopardy.

Years ago, life was a plentiful buffet for Vito Carelli. But a tragic turn of events now keeps the young chef at Fiorello’s quiet and secretive, preferring to let his amazing Italian peasant cuisine do his talking.

When the two cooks meet over an open flame, sparks fly. Both need a taste of something more — something real, something true — to separate the good from the bad and find the love — and the hope — that just might be their salvation.

Review: This story is part of a series but can be read as a stand-alone. Henry knows what he wants to do with his life now that he’s graduated from school and it isn’t what his wealthy father has planned for him, but he doesn’t know if he will be brave enough to go after what he wants until he spots a help wanted ad for a little Italian restaurant called Fiorella’s. Vito was blessed with a good life until a tragic turn of events took what he loved most, now he lives quietly, keeping to himself and working as the chef at Fiorella’s. For over a year nothing has breached the shell he lives in until a blond ‘bubble dancer’ begins to crack his shell, but Vito doesn’t want his safe shell shattered and Henry’s life is falling apart around him. Will either man take a chance on something more or will they retreat to the safety or the world that they know.

Fiorella’s is another wonderful story from Rick R. Reed that touches our hearts. Henry is the typical rich kid who has had everything offered to him on a platter except the love of his parents, his mother is cold and distant and his father is a powerful attorney who has Henry’s life mapped out for him. Henry wants to take a chance of grabbing his dream though, a dream that would have him cooking for other people, a dream that his father would look down on but with only the summer free before he starts collage he decides to grab the chance he is offered. Vito is perfectly with his lonely life working as the chef at Fiorella’s, at least that’s what he wants everyone to believe, the loss of those he loved the most still weighs him down and he never wants to open is heart to that kind of hurt again. Having Henry come into his life has Vito tempted to live again. As Henry’s life begins to fall apart and he turns to Vito, but cracking Vito’s secretive shell isn’t easy.

Henry is a young man who doesn’t want to be caged into a life he won’t enjoy, but going against his father’s wishes isn’t easy especially when he gets no support from his mother. As Henry moves into the world of adulthood he learns that life isn’t easy or going to fit into what he wants, it’s a hard world with realities he might not like and he has to grow up. Vito knows that life is far from easy; he now keeps himself to himself with no interest in love. We don’t get an easy romance, in fact Vito seems to barely tolerate Henry, what we get is a young man on the verge of making his own adult decisions and a jaded man who has turned his back on life.

This is a beautifully written story, we are made to feel both men’s pain in this story, Henry’s pain as his life changes and his solid family base is shaken and Vito’s bleeding pain as he tries to let go of the past. There are some poignant moments as Vito loses himself in his dreams and memories and as he begins to open up to Henry but we also have his anger as he feels that he’s being forced to let go of the past. With Henry we get his excitement of beginning his life, the fear of going against his father, the devastation of his family not being what he thought and the twisting feelings he has for Vito. These two men need each other and it takes a large part of the book to get to that stage, but it fits as we get to know both Vito and Henry, it’s the pace that suits both of them.

I recommend this to those who love stories of embarking on your own path in life, of being poked back to life and the living, of a tentative new love blooming, of grabbing life with both hands and facing the fall out, and of two men who embark on a new stage in their lives.