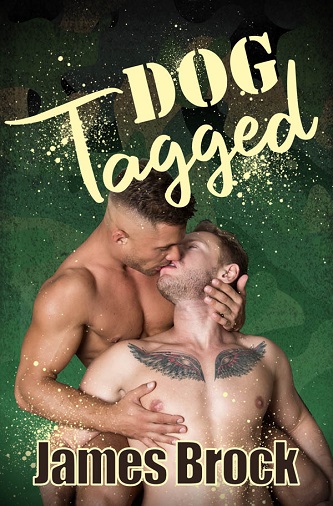 Blurb: Drill Sergeant Clay Norris has his military life running right on schedule.  Career focused he appreciates that he joined up when his sexuality is at least acknowledged under Don’t Ask, Don’t tell, even if he doesn’t get to act on his urges as much as he likes.

In formation with his new trainee group he locks eyes with Chevrolet Banks and his life, their lives, are changed forever.

Dog Tagged is an insta love military romance based on real life incidents.

Review: Clay has his world turned upside down when he sets eyes on Chevy, for the first time he’s met someone who consumes his thoughts but they are both in the Army during the time of DADT and Clay has some hard choices to make when he is confronted by his commanding officer.

I loved this story, absolutely loved it. James Brock has written a realistic hard story about life in a military under DADT, it’s not sugar-coated and it’s not a gentle romance, it’s a story written with truth in every line.

The story is all from Clay’s POV, his thoughts, his feelings and his wants. We don’t really get a chance to know Chevy, only what Clay discovers about Chevy. Both characters are wonderful though and Evan, who becomes Clay’s best friend, is a fantastic character.

There is a hell of a lot of military detail in this story which I just adored, you get fully immersed in the life of Clay because of this and understand the pressure that these guys are under to keep their feelings to themselves. And while you do wish that Clay could have fought against his commanding officers actions you know that if he did then the story would have finished just as it was getting started.

For the length of this book there is a lot that goes on, homophobia, near death experiences, break ups, going wild on the town, capture, rescue, and make ups. I also want to say a thank you to James Brock for not having his MC’s be unrealistic heroic Marines or Special Forces, which many military stories focus on, as this gives us a chance to get a realistic view of normal grunts moving up the ranks.

Readers if you are looking for a sweet soft military romance then this isn’t for you because this story might have insta love but it isn’t an easy ride, and there are other men being sexed up by Clay (but no cheating).

I recommend this to those who love military stories which are immersed in military life, who love stories of hope, great friendships and an eventual happy endings.