Hi guys! We have Bobby Rayne & Steph Marie stopping by today with the tour for their new release Eeli, we have a great excerpt and a brilliant $20 Amazon GC giveaway so check out the post and enter the giveaway! ❤ ~Pixie~ p.s. keep an eye out for my review coming soon! 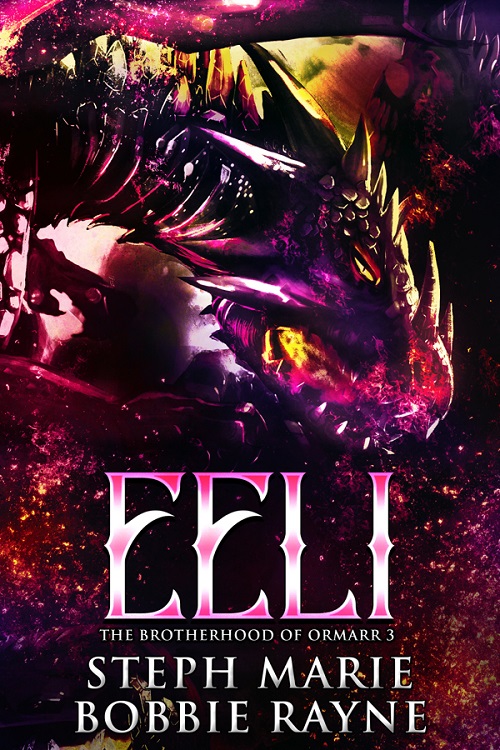 (The Brotherhood of Ormarr 03)
by

Eeli~
I’ve been training my entire life for this; I need to be the best, the best fighter, the best dragon rider in the entire brotherhood. This is what I was born for. The only problem is that my bonded dragon, Bodhi, and I can’t seem to get it together. One minute I think we’re connecting properly, and the next she’s taking off, leading me to the one guy I don’t want to know: Slash. He’s basically the opposite of me in every way, and I don’t get why he’s suddenly everywhere I turn, but I can’t deny how he makes me feel when he looks at me.

Slash~
Three years ago my sister and I had to come to a new town and started new schools without our parents’ unconditional love and support. My uncle’s an uncaring drunk, so I’m doing the best I can to keep us both clothed and fed with only an after school job. If I didn’t have her to live for, the loneliness would be excruciating. Now, with only a few months until graduation, I’ve suddenly made a friend because of my sister, and another guy keeps stumbling into me who I think needs help: Eeli. I don’t understand why no one else sees how oddly he’s behaving, but I can’t deny my attraction for him is growing with every mishap.

Eeli is the third book in The Brotherhood of Ormarr series. While each book focuses on a different couple, the overall story arc continues in the next installment. For maximum enjoyment, we suggest reading in order. Eeli is a m/m NA romance, and is recommended for adults 18 years and older. Before I could say anything else, Bodhi released herself from my skin and scampered down my arm, then took off like a shot down the hallway. There was no way I could’ve caught her.

“Bo!” What the heck was she doing? We were in a public building for crying out loud! “Bodhi, stop!”

She ran around a corner, and I heard a scream. Crap. She wasn’t even hiding herself from humans. Now I was going to have to erase some poor human’s memory of her. Bodhi, stay where you are.

I rolled my eyes. Did she seriously take off like that for a candy wrapper? It’s trash, Bo, why are you so obsessed with trash?

Turning the corner, I took in the scene before me. Bodhi was in front of me looking ready to pounce and doing that little butt wiggle thing she did every time she saw a candy wrapper. And a guy had his back against the lockers with his hands in the air like he was being arrested or something. My eyes widened when I realized who it was. Slash. Because of course it was. He was the only other person here as far as I knew. Fantastic.

“Of course, it’d be you,” I muttered with an eye roll.

“Wh-what is that thing?” he asked without taking his eyes off the small dragon.

“That’s Bodhi, she’s my—” I was cut off when Bo suddenly launched herself at him and he screamed and covered his face with his arms. Unfortunately for him, she grabbed onto his forearm with her clawed feet, then flipped herself upside down, hanging off his arm and hugging Slash’s waist with her wings. Her overly playful nature wasn’t coming in handy right now. “—she’s my dragon,” I finished with a sigh.

Slash was screaming and waving his arms, trying to push her off with no luck.

“Slash, just give her your candy.”

He paused his crazy flailing. “Wh-what?”

“Your candy. She wants it. If you hand it over, she’ll leave you alone and you can forget all about this.” When I erase your memory, I added to myself. Maybe I could erase his memory of every crap thing he’d seen me do the past few weeks, too.

Without looking at me, he was trying to peel her off his waist. “I don’t have any candy.”

“Do you have a wrapper?”

She twisted her neck to look at me, then flipped around to wrap her wings around Slash as she said, Mine.

What’s yours? He doesn’t have any candy.

She looked at me again, then nudged a terrified Slash’s cheek and said, Ours.

It took me a second, but my eyes widened as her meaning finally hit me, and I looked at Slash as he begged, “Please get it off me.”

“Eeli! Please help me! Call the police or animal control or something!”

I opened my mouth to say something, but no words came out as Slash finally looked at me. As soon as our eyes connected, I felt it. That strange pull I’d felt every time I’d been around him lately and chalked it off as some kind of weird fascination with a mix of lust. But that wasn’t all it was. I should’ve known it was more than that, but… but it was Slash.

Swallowing thickly, I exchanged a look with Bo, then whispered to Slash, “She’s not going to hurt you.”

“She’s my bonded dragon. She’s… just happy to see you.”

“Dr-dragon?” He glanced down at her as she snuggled into his neck, then he whispered, “Dragons aren’t real.”

“Clearly,” I said sarcastically as I finally peeled Bodhi off him.

Slash stayed against the lockers, but moved away a few steps without taking his eyes off her. It was a struggle to keep Bodhi from going after him again.

Slash finally looked at me again, and I instantly felt the pull even though he looked angry and ready to murder me with his eyes alone. “Are you kidding me? No way in hell am I going anywhere with you or that thing in your arms.”

Bo sunk into me, and I knew he’d hurt her feelings, so I hugged her to my chest. “Don’t say stuff like that about her. Say whatever you want about me, Slash, but don’t you dare bully Bodhi.”

His eyebrows went up, but all he muttered was, “Whatever. I’m just going to go.” He went to scoop up his backpack from the ground where it’d fallen, but I quickly stepped on the strap so he couldn’t take it.

“Oh yeah, Eeli? What’re you gonna do about it?”

Bo jumped from my arms and began pecking at his feet, making him move closer to me as he jumped around and tried to get away. When she had him up against the lockers in front of me again, I pulled out my cell to call Zale.

“I’m still at school, but uh… can you meet me here? I need your help.” Before he could reply I added, “And bring some rope.”

“Eeli, what’s going on? Are you hurt?” Zale asked at the same time that Slash’s eyes widened as he said, “Rope?”

I didn’t take my eyes off him as I asked my brother, “Is your mate with you?”

“Why do you need Davis?”

My blue eyes connected with Slash’s hazel ones, and I said, “Because he has experience with kidnapping people.”

The Brother of Ormarr series!

Being a dragon rider for the Brotherhood of Ormarr is filled with adventure, but danger can lurk behind every corner with the Order of Amsel set out to destroy the riders. Azaran, Zale, Eeli, and Malachite have spent their whole lives training, but will it be enough?

The brothers lost their parents years ago to assassins, but they’ve never been able to figure out who was behind the attack. Follow the journey of these dragon riders, along with their faithful dragons, as they find their mates and discover clues that will lead to the final epic showdown.

The Brotherhood of Ormarr series consists of four books, each with its own HEA. While each book focuses on a different couple, the overall story arc continues into the next installment. For maximum enjoyment, we suggest reading in order. This is a m/m romance series, and is recommended for adults 18 years and older. Bobbie Rayne grew up in Baltimore, Maryland and still lives there today. She’s married to her very patient husband, and they have two amazing sons together, as well as two crazy dogs. She spends her time writing, driving her kids all over town, and helping run the PTA.

Her children are one of the reasons she loves YA so much, and one reason why she thinks it’s important to bring LGBTQ+ main characters into fiction. Writing YA has always been a dream of hers, and she truly believes that writing it is good for her soul. Her family means the world to her, but coffee might be high up on that list, too, so if you bring her some, you just might end up with a new best friend.

Steph Marie is a proud mom of two teenage daughters and her pup. She’s always had a love for words and what they can do, their ability to create and transform life. She’s shared her words and stories with people in her immediate life, but never considered writing and publishing Young Adult until her oldest daughter said she wished all teens had the ability to sit around her kitchen table and talk. That night a series was born, and characters haven’t stopped popping up in her head wanting their story told yet. Her favorite things in life outside of her family are a huge cup of coffee, a blanket to snuggle under, and a delicious piece of cake–if you’re nice, she’ll even share.