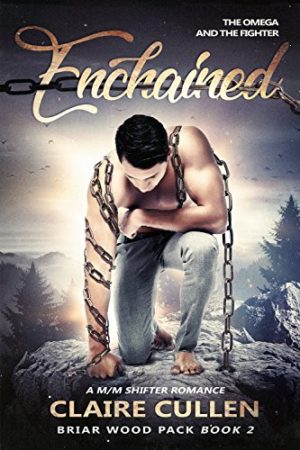 Title: Enchained: The Omega and the Fighter

Blurb: As the leader of his pack, Griffin is not a typical omega. As far as he’s concerned, he’s destined to be alone; unable to bond, trained to kill, and with the responsibilities of a pack on his shoulders. If he was ever to take a mate, they’d have to be unlike anyone he’s ever met. An alpha willing to stand back and let their omega take charge? Not likely.

When he finds a feral alpha fighter so dangerous he’s about to be killed, Griffin makes the ill-advised decision to intervene. He sees something more than an animal in the alpha’s eyes. But whoever the fighter was before, all that’s left is anger and instinct. Can Griffin coax the man beneath back to the surface?

The Beast knows only the fight, nothing more. He doesn’t remember a before and doesn’t trust the strange omega who comes to visit him every day, bringing food and meaningless words. Until, one day, Griffin brings a name, and a part of Beast hidden deep inside breaks free.

Beau doesn’t know how Griffin brought him back. All he knows is the omega is his anchor in a storm. When forces from outside Griffin’s pack threaten to pull them apart, he’ll do everything he can to get his omega back. He’ll fight again, even if it means losing himself once more.

Review: Each book in the Briar Woods Pack collection features a new romantic couple. To enjoy the overall story arc and crossover characters, I would recommend reading the series in sequential order.

Griffin’s pack is quite unusual. For one he is the omega and the one in charge, where as the alpha is second in charge. Then there is the fact that he is a feline shifter, there is a wolf shifter, fox shifter and so on in this pack. They rescue those who are in need and kill those who fight them. He comes across an alpha who is feral and about to be put down. That is until he decides that there is a chance that the alpha can be helped. It also worked out that he likes him.

Beau was an alpha who fought and killed, until one time he went feral. That story will have you in tears but not just because of the death it self, but who the man was. Here he is with an omega who wants to help him. Read the book if you want the juicy details though, trust me you won’t be sorry.

There were some great parts to this story but some not so great parts. A story is written because an author has a story to tell, and as a reader we don’t always understand their take on things. My issues wasn’t the death of the man that sent Beau into what he became but who he was. I didn’t much care for that and so much so that I will probably not really read the next book. Also the death well I won’t tell you who, but it wasn’t needed to make the story. I am afraid that the way this story unfolded really changed my mind in this series.

The story itself was fresh and exciting plus the danger just added to it. The characters are a bit different to get to know. I loved Griffin and could connect with him, but Beau was a bit different in parts. I actually found myself liking them both, however I couldn’t connect with them. The story felt a bit stiff and in parts boring to me. There were some good parts though that I liked, but over all the story just didn’t rock my world like it should have.